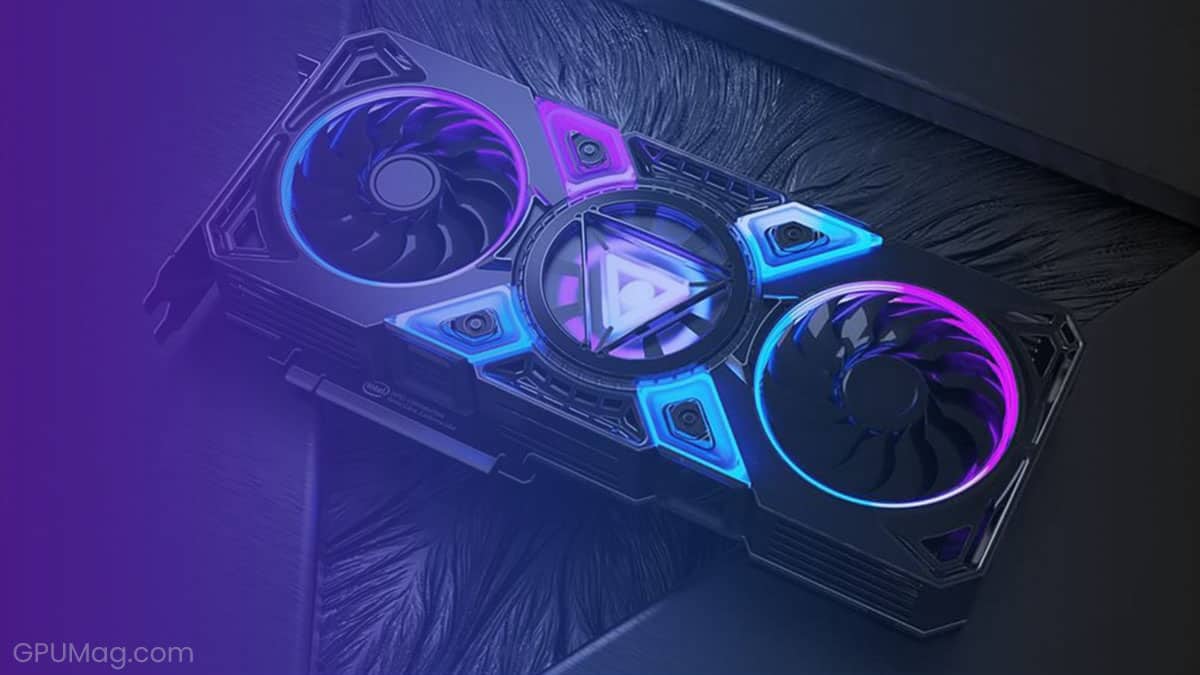 In the midst of two GPU juggernauts hyping up their new releases, an unknown in the field is attempting to enter the scenario. Although Intel’s graphics card track record is almost non-existent, their brand is huge in the general technology field.

Now, they are planning to get competitive in the GPU market with their Intel Xe lineup.

For the longest time, Intel has been a force to be reckoned with in the CPU market, but AMD has objectively caught up and given them some stiff competition.

Who knows if Intel decided to try and do the same thing to AMD in the GPU market? Either way now is the perfect time for a third option to enter the fray.

The rivalry between AMD and Nvidia is re-igniting after years of Nvidia domination and things look to be on much equal footing with the releases of their next-gen graphics cards. This makes up for a perfect storm for Intel to enter the market.

Related:AMD vs NVIDIA – Which GPU Manufacturer Should You Choose?

As mentioned earlier, Intel didn’t exactly perform well the last time they tried to launch a graphics card. But that was a long time ago; 20 years ago, to be exact. Things have more than dramatically changed since then.

That’s not to say that Intel has no clue how to develop a graphics card. They know what they’re doing – their integrated Intel HD Graphics have been a staple of a vast majority of modern laptops. Because these integrated chips aren’t meant for gaming, Intel has decided to make their own dedicated graphics card.

Seeing how Intel’s Xe has just been announced, we’ll try to dive deeper into the information we already have. We will only discuss mobile GPUs – Xe-LP and desktop GPUs – Xe-HPG.

With Nvidia’s RTX 3000 series and AMD’s RDNA 2 coming before the end of 2020, it seems like we’ll have a decent picture of the current state of the “war” between the two GPU manufacturers come 2021.

Maybe this is the reason why Intel has decided not to release Xe before then. It could also be for a variety of other reasons, including a move from their speculated 7nm node, which they are now calling 10nm SuperFin node.

It’s worth pointing out that the latest information from inside the company suggests that Intel’s 7nm node might not be seen until 2022 or even 2023, which is very different from the initial report of Intel’s chips being built on it this year. However, it’s been announced that they will use a third-party foundry for their GPUs.

“The company’s 7nm-based CPU product timing is shifting approximately six months relative to prior expectations. The primary driver is the yield of Intel’s 7nm process, which based on recent data, is now trending approximately twelve months behind the company’s internal target.”

Intel Xe was reported to have begun testing in late 2019 with its intended release scheduled for mid-2020. When the long-awaited moment arrived, all we got was an announcement and a delay instead.

On September 2, 2020, we saw Tiger Lake laptops with Intel’s 11th gen CPUs get released, but also with the much anticipated Intel Iris Xe.

A big caveat is that these are integrated mobile graphics cards, far away from what Nvidia and AMD can offer in that market. Another reason why it might’ve flown under the radar is that Nvidia had a big announcement on September 1, 2020, regarding their flagship next-gen GPU, which was released within weeks.

This could also be a tactic to be the first to enter the market as both Nvidia and AMD tend to release their GPU’s mobile version sometime after the release of their flagship cards.

From this perspective, it appears that desktop GPUs in the enthusiast/mid-range are being prepared for 2021. At this point, the most heavily rumored timeframe is Q1 2021, but with several delays and slowdowns happening already, we shouldn’t get ahead of ourselves just yet.

One thing that is almost certain is that Intel will have to price their GPUs lower than both AMD and Nvidia. Despite having a good standing name in the technology world, it’s still somewhat of an unknown in the graphics card market. Sure, its HD Graphics series are solid integrated GPUs, but aside from that, there’s just nothing else.

Although when Intel Xe was first announced many expected it to offer budget cards, with mid-range being the highest they could aim for, apparently they intend to aim a bit higher.

Reactors online are guessing that Xe will be somewhere in the range of Nvidia’s 1600 series, but some also believe that they could be on par with an RTX 2070. One of the main reasons for this is that Intel has confirmed that their GPUs will be featuring hardware-accelerated ray-tracing.

Intel Xe Needs To Be The Cheaper Alternative

This is exactly the reason behind the big dilemma of price speculation. We do still anticipate Intel coming out strong with good budget/low-end options, but the announcement of ray-tracing in their cards puts a serious dent into being able to give any sort of precise price prediction.

At the moment, it doesn’t appear that Intel will be able to fully challenge the top-of-the-line Nvidia or AMD graphics cards, but if ray tracing is executed properly, we might see a good mid-range challenger.

Something essential for a large corporation like Intel is that ruthless competitive spirit. It’s fair to expect that whatever product they release, in whatever range, will be slightly cheaper than whatever AMD or Nvidia have to offer in the same area.

Although this section is still very hard to predict for Intel Xe-HPG, we do have a pretty good idea of what Xe-LP (now named Iris Xe) was able to pull off.

Disclaimer: Iris Xe is a portable GPU. As such, it can’t deliver a 4K 60 FPS performance like a high-end desktop graphics card, so just keep that in mind before getting underwhelmed.

Despite this being a relatively short clip, it’s quite impressive that the game is running at full HD 1080p at a decent 30 FPS. Although it would be foolish to assume that this signals the end of gaming laptops, it’s still reasonable to say that laptop gaming is getting more and more accessible.

Now that Iris Xe saw the light of day, we can report that that Battlefield V footage was legit and that the laptop is more than capable of giving you a good approach to gaming. Most notably, it was able to achieve 60+FPS on GTA V and perform at competitive standards for eSports games like DotA 2, Rocket League and CS:GO.

The main reason why gamers should be excited about Xe-HPG is the supposed hardware-accelerated ray-tracing capability. With the introduction of RTX 2000 series, we’ve been thrilled with what real-time ray-tracing can look like, so it will be interesting to see how Intel pulls it off.

It is always nice to see new and improved iGPUs for laptops, but we all know that enthusiasts are looking for something more powerful that is going to bring competition against NVIDIA and AMD.

Pretty vague, but the DG2 found in the codename and name inside of the leaks suggests that they are testing a discrete GPU. We know from previous reports that Xe DG1 is targeted towards laptops while Xe DG2 is supposedly for the enthusiast market.

Currently, we don’t know the architectural and design differences between Intel’s mobile and discrete GPUs which means it is impossible to predict any performance right now.

Nevertheless, these leaks tell us that Xe is continuously in the works and that Intel is aiming to deliver its brand-new products as soon as possible.

With the release of Iris Xe, we only got a glimpse of what Intel Xe is all about, but at least we have a good starting point. There are some rumors and speculations regarding the discrete GPUs from Intel and we’ll cover that too.

As mentioned earlier, Intel will be releasing a graphics card for different market sections and despite that being certainly commendable, we’ll only discuss mobile and desktop versions.

Unfortunately, there simply isn’t enough information about the desktop variant except for the fact that it will employ a GDDR6 memory type.

While that is a good sign, it means that Intel will be lagging from the start considering that the current market leader Nvidia have equipped their flagship GPUs, RTX 3080 and RTX 3090 with brand new memory type Micron’s GDDR6X.

It’s worth noting that this disadvantage relates only to the top cards on the market as RTX 3070 also has GDDR6 as well as AMD’s RDNA 2 cards. Aside from that, Intel can boast about their 96 execution units, which is a good number to compete with both AMD and Nvidia’s mobile solutions.

Another sign that Intel is heading in the right direction is the fact they achieved a core clock of 400Mhz with a boost clock of 1350Mhz. Intel’s last-generation Iris Plus was slightly behind AMD’s Vega 11 but Iris Xe competes more than competently. Still, the mobile integrated GPU market is ever-evolving, so that too can change quickly.

The latest news indicates that Intel’s high-performing graphics card will have 512 EUs (execution units) which will rival AMD’s latest RX 6000 outing. This isn’t the only place where Intel will look to challenge AMD and Nvidia as the rumored numbers for the raw shader power look like they could position Intel’s best card shoulder to shoulder with other GPU giants.

Based on a few new leaks on Twitter it looks like Intel is planning to release 6 discrete GPUs. That is more than anyone expected. Although we should always take Twitter leaks with a bit of grain of salt.

This is pretty optimistic considering that Intel hasn’t released a discrete GPU for the past 20 years.

Getting 12GB and 16GB of VRAM on Xe is also a bit hopeful, but it is not impossible, especially if Intel decides to go with GDDR6. GDDR6 is much cheaper to manufacture than GDDR6X.

In other words, it’s not going to be too expensive for Intel to push Xe to 16GB VRAM.

The 4096 streaming processors for the 512 EU variant are just a prediction based on the knowledge people have about the Intel Xe architecture.

However, that prediction could become real. If it does, this means that the 512 EU variant can be put against AMD’s RX 6800. One of the best GPUs on the market right now.

But, it can go against AMD’s graphics card only if it can match it in clock speed. We need to see DG2 reach a core clock speed of at least 1.8 GHz to have comparable performance.

With that in mind, the second-best variant with 384 EU or 3072 SP could be put against the RX 6700. Again, only if the core clock speeds can be matched.

Why We Should Be Cautiously Optimistic About Intel Xe

This should probably go without saying, but we need to do so, at least for posterity’s sake.

Mainstream Xe is still some time away and, based on the shakiness Intel has experienced lately, we wonder how soon and how good their promises can be.

Still, there is room for optimism. Intel is a company with a long history in technology and even if they’re off to a rocky start, they certainly have the resources and the know-how to compete in this field.

We might not be getting a full-on three-way war between Intel, AMD, and Nvidia, but something is brewing and as gamers and tech enthusiasts, we can’t wait.