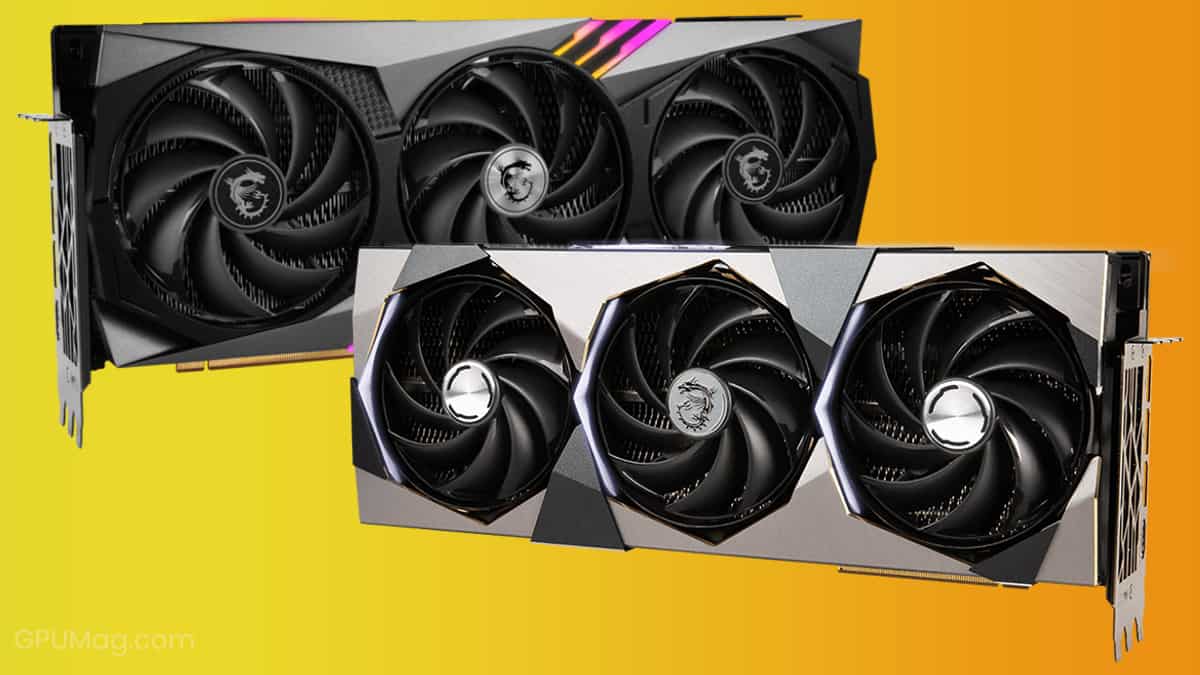 While the RTX 4080 proved to offer some of the worst cost per frame in all resolutions, it’s still undoubtedly one of the top 3 fastest GPUs in the world. Once its raw power is paired with DLSS 3/Frame Generation, the performance is unmatched.

However, $1,200 is a lot for a graphics card, and the extra costs for an aftermarket model can make the purchase even more difficult.

We’ll list the best RTX 4080 graphics cards based on cost per frame, performance, cooling, noise, and design to ensure you get the most value out of your money. 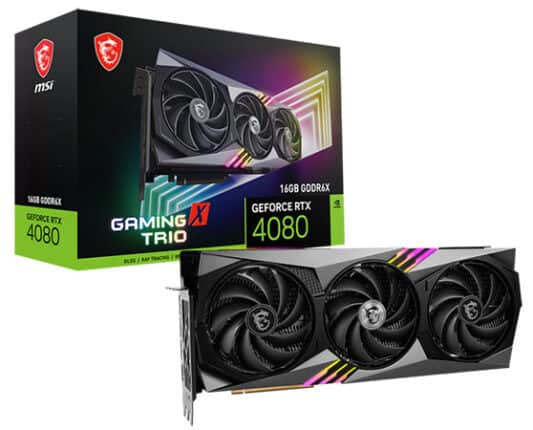 The MSI Gaming X Trio is one of our most frequently mentioned AIBs in these buyer guides for the past few AMD and NVIDIA generations for a good reason. These things come at a fair price, offer exceptional cooling with low noise, and sometimes can even overclock well.

Will the RTX 4080 Gaming X Trio continue the “legacy”?

Over the years, the Gaming X Trio’s design has not changed much, but that’s necessarily a bad thing. While we encourage and appreciate more outside-the-box aesthetics from GPU manufacturers because GPU design has become a bit stale, MSI’s RTX 4080 rocks a clean and minimalistic design.

Although it is pretty big with a length of 34cm, and it takes up three case slots. It’s pretty heavy too, at 1880g.

The factory overclock with the “Extreme Performance” option in MSI Center is 2610 MHz. In the games tested, the clocks average around 2850 MHz. Pretty good out-of-the-box performance!

Unfortunately, the RTX 4080 doesn’t provide a lot of room for overclocking. The Gaming X Trio, for example, can get up to 2930 MHz, about 3% higher than factory clock speeds.

With the default BIOS, the GPU should average around 68°C with the fans spinning around 1200 RPM, producing noise of only 27 dBA.

That’s very quiet compared to many other GPU coolers! 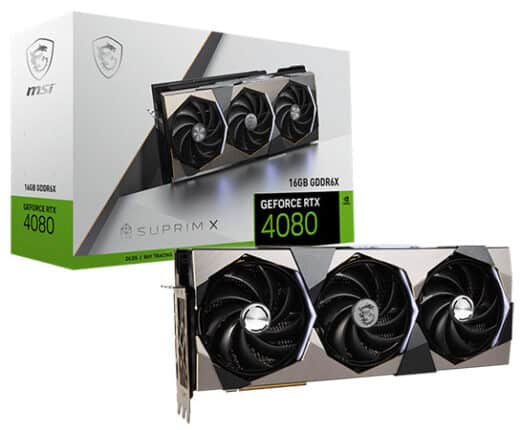 We covered MSI’s famous Gaming X Trio cooler for the RTX 4080, but what about something more premium like the Suprim X? Is MSI’s GeForce RTX 4080 Suprim X worth the extra cash?

Suprim X is one of MSI’s premium/expensive GPU coolers, which is why the RTX 4080 Suprim X costs $1380. That’s $70 more expensive than the Gaming X Trio and $180 more than the Founders Edition.

Whether that extra cost is worth it depends on how important you find the card’s design, extra overclocking room, and cooling.

Immediately there are signs that the RTX 4080 Suprim X is a premium-priced GPU. The most obvious sign is the sheer size of this thing. It’s almost the same length and width as the other MSI GPU but is 9mm thicker. That’s why it is also 400g heavier, weighing 2373g.

MSI’s specifications claim that the RTX 4080 Suprim X’s boost clock is 2640 MHz, but testing shows that in games, the GPU averages around 2895 MHz, so 45 MHz is higher than the Gaming X Trio.

But a premium card like this should be able to deliver better overclocking. And it does! Based on others’ testing, it seems that the RTX 4080 Suprim X can go over 3000MHz. Techpowerup’s overclocking shows the average GPU clock going up to 3029 MHz.

Considering the extra thickness of this RTX 4080, naturally, it beats out the Gaming X Trio with temperature averages around 66°C, 1120 fan RPM, and noise levels around 26.8 dBA.

Switching to MSI’s “Gaming BIOS,” temperatures drop by around 5 degrees, but the noise goes up to 33 dBA. 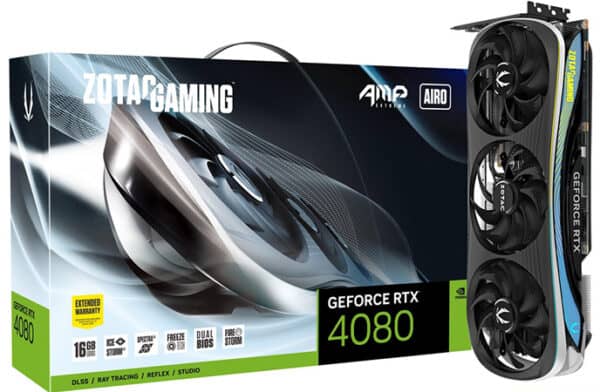 While we’d much rather look at more value-oriented aftermarket cards/coolers, there are simply not enough because this is a premium GPU, so most AIBs are making premium coolers for it.

Out of all three graphics cards in this buyer’s guide, Zotac’s RTX 4080 AMP Extreme AIRO is the most expensive one with an MSRP of $1400, so a $20 difference wit the Suprim X and $200 more expensive than the Founders Edition.

Zotac’s design abandons the traditional and overused sharp edges and straight lines. Instead, it sports rounded and smooth edges across the entire GPU shroud. So, whether we like it or not, it doesn’t matter; what’s important is that it is unique, giving buyers the option for something different.

Zotac specifies that this RTX 4080’s boost clock is 2610 MHz, but when pushed to the limit in games, its clock speeds average around 2880 MHz.

But, the RTX 4080 is already at its limit, so further overclocking can push it only a few more MHz over 3000.

Even though this is the longest card of the bunch and thicker than the Gaming X Trio, it produces the most noise compared to the other options. Techpowerup recorded an average of 36.9 dBA while gaming, with the GPU sitting at around 63°C.

It’s possible to quiet it down with a better fan curve, but it probably won’t match MSI’s Suprim X or Gaming X Trio.

Most people prefer AIB models for their GPUs for better aesthetics, cooling, and overclocking. However, NVIDIA’s Founders Edition design for the RTX 3000 and 4000 Series is not that bad and comes at a lower price.

So, how does it compare against other RTX 4080s?

The Founders Edition’s most significant advantage is the price because you can buy the GPU at its actual MSRP. The RTX 4080’s MSRP is $1200, making it at least $100 cheaper than the other options on this buyer’s guide.

What may convince many RTX 4080 buyers is that the Founders Edition is the smallest RTX 4080 you can get. It’s only 310mm long and 61mm thick, although it still needs three slots.

Naturally, the RTX 4080 Founders Edition isn’t factory overclocked like other AIBs, so the specs and in-game clock speeds are lower. In various games, the clock speeds average around 2750 MHz.

Realistically, the difference in FPS with other aftermarket 4080s won’t be more than 5%.

However, if you want to see the Founders Edition perform as fast as MSI or Zotac, it’s possible to push the clock speeds to 2950 MHz or more!

While running games with the RTX 4080 Founders Edition, temperatures average around 63°C while producing noise of around 34 dBA at 1350 RPM.

So, even though it is the cheapest RTX 4080 available, its temperature, and noise levels aren’t that bad. Although, your mileage may vary depending on the build.

Which RTX 4080 Graphics Card Should You Get?

We chose MSI’s Gaming X Trio, Suprim X, Nvidia’s Founders Edition, and Zotac’s AMP Extreme AIRO as some of the best RTX 4080s, but which one of these should you get?

Well, if you don’t want to spend any more money on a GPU, go with the RTX 4080 Founders Edition, as it offers the Best Value.

If you are looking for the Premium Pick, something that’s faster, cool, quiet, and bolder in design, consider getting MSI’s GeForce RTX 4080 Suprim X!

MSI’s RTX 4080 Gaming X Trio also offers pretty good value since it is capable in every aspect. The Zotac RTX 4080 AMP Extreme AIRO is a good choice, but it’s a bit underwhelming in terms of thermals and acoustics.