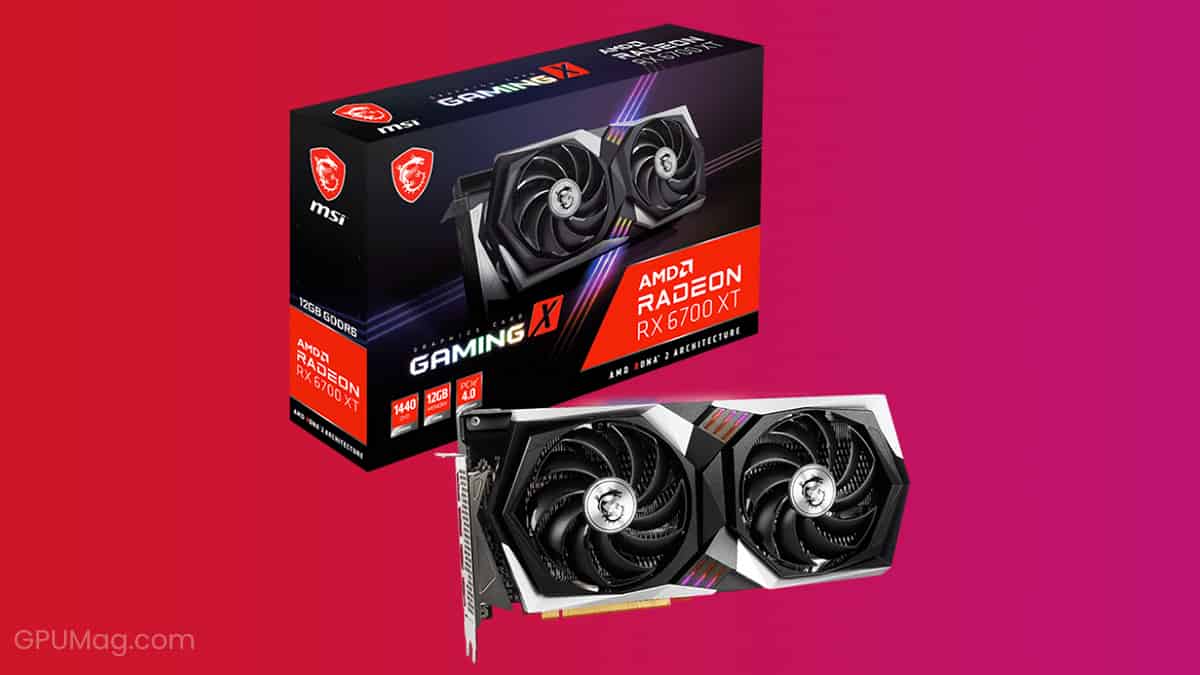 In the ongoing battle for GPU supremacy, in March 2021, AMD finally presented something competitive in the market against the mid-tier RTX 3060Ti and higher-end RTX 3070.

This was the RX 6700 XT. Before that reveal, the RX 6800 and RX 6800 XT were the only solid price-for-performance choices on the market. However, both cards were priced over $500, which is more than many PC gamers were willing (or able) to pay.

If you have already decided that this is the right GPU for your computer, look at our list of the best RX 6700 XTs. 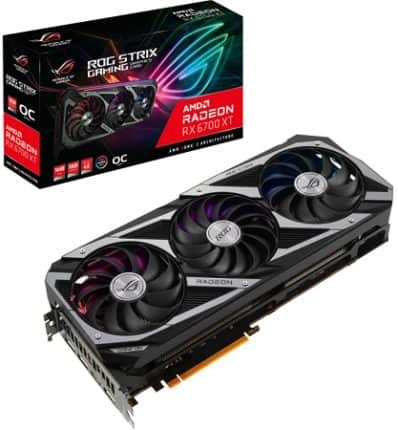 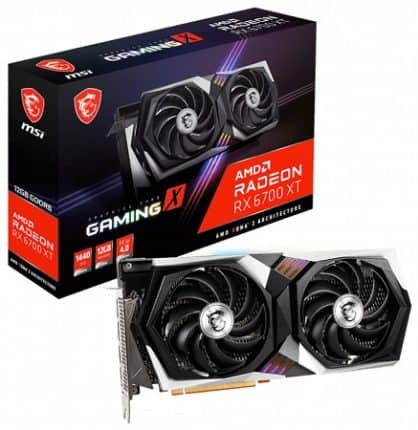 Unlike all the previous GPUs in the RX 6000 lineup and NVIDIA’s 3000 lineups, the RX 6700 XT only features two fans this time. This is why its name doesn’t feature the popular “Trio” tag.

However, we need to remember that this is a much less power-hungry GPU than the rest of the SKUs, so a triple-fan setup is probably unnecessary.

In any case, let’s see what the numbers have to say about the RX 6700 XT Gaming X.

The design is very similar to all the other Gaming X Trio models we’ve seen with the RTX 3000 and RX 6000 GPUs. The main difference is that it is much shorter in length, being only 279 mm, and has two fans instead of the standard three.

The light bar on the side of the card has also been removed, but there’s still some RGB left on the MSI logo.

On the back, there is nothing too interesting to see, only a metal backplate with the familiar MSI dragon and a few thermal pads under it.

In terms of performance, it looks pretty promising, with an average boost clock in-game of about 2680 MHz. This is not much more than the advertised boost clocks, but anything extra is still welcome.

When it comes to overclocking, it appears there is a bit of headroom on most RX 6700 XT variants. This AIB has an average OC of about 2750 MHz. With this kind of increase in the core clocks, expect a 5% to 8% improvement to in-game performance.

As previously mentioned, the RX 6700 XT is a less power-hungry GPU, which is why MSI opted for the TWIN FROZR 8 cooling solution instead of the TRI FROZR 2 we are familiar with as it was used on the GPUs released in late 2020.

Either way, the dual-fan cooling setup is good enough to handle the power draw of 240 W.

A STRIX variation of this card was expected. ASUS delivers the STRIX treatment for almost all mid and high-end GPUs.

Unlike MSI, ASUS retains the triple-fan setup, and the thickness of the heatsink is about the same as most of the other 2020 and 2021 STRIX graphics cards.

This RX 6700 XT STRIX OC takes on the same design found on all the other STRIX AIBs from 2020. In short, it looks pretty good. It has an industrial aesthetic, and it is quite long at 322 millimeters, much longer than the Gaming X. It is important to keep that kind of information in mind, especially if you have a smaller case.

On the side of the GPU, there is a lot of RGB, which is executed perfectly. ASUS always delivers in that aspect.

There is minimal branding on the back, which is also nice to see. It fits in with any case and motherboard combo.

This STRIX comes with an advertised boost clock a bit higher than MSI’s Gaming X at 2669MHz. The average clock speed during heavy and long loads stays around that advertised number.

If you want to push the GPU further, there is also some OC headroom available. If you ramp up the fan curve a bit, you can tweak the STRIX to 2820+ MHz.

As this is a triple-fan card, lower temperatures were expected, and that’s exactly what the numbers show us.

If you don’t care about the noise, you can switch back to the performance BIOS, which has a more aggressive fan curve but keeps temperatures down to an average of 53°C. This is very impressive. 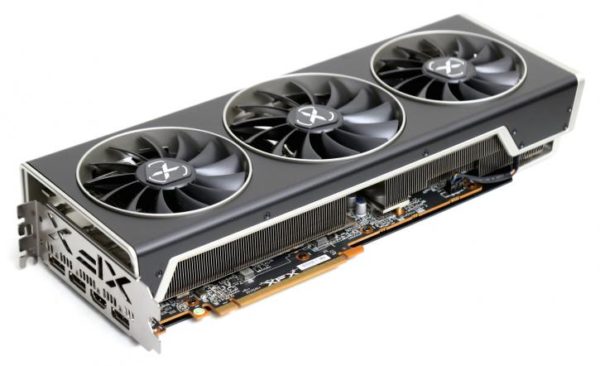 On those other GPUs, this design and cooling solution from XFX proved quite effective, and the cards did boost pretty well.

XFX has gone with a pretty minimalist style, something rarely seen on the GPU market these days.

On the front, you will see the classic triple-fan MERC 319 setup with a completely matte black shroud around them. This looks pretty clean.

There is 6700 XT and XFX branding on the side, with both being RGB.

The back is slightly more interesting. There’s a cutout in the backplate in the shape of the XFX logo and a large white MERC logo. This doesn’t really fit in with the GPU considering its otherwise minimalist style.

The backplate is metal and features thermal pads for better heat dissipation.

The advertised factory boost clock is 2581 MHz, but that appears to not always be the case because the GPU drops to an average of around 2560 MHz.

Usually, these AIBs advertise a lower boost clock and then deliver a much better factory OC, but that seems not to be the case here, which is unfortunate.

If you want to push this card further, you could always try overclocking. The OC headroom is similar to the Gaming X, averaging at 2740 or 2750 MHz.

A triple-fan cooling solution should perform better than the MSI variant’s TWIN FROZR 8, and it does so. It’s about four to five degrees Celsius lower, averaging at around 63°C with max noise levels at 34dBA.

Aftermarket cards are always more efficient at cooling and are overall faster than the reference card. This applies to both AMD and NVIDIA GPUs.

However, that improved efficiency and performance come at a price. This RX 6700 XT reference card is not that bad in terms of cooling; it might be the best price-for-performance variant of the lot.

AMD has stuck with a similar design found on the other SKUs in their lineup. The only difference is that this comes with two fans rather than the usual triple-fan setup.

It is also one of the smallest and lightest, weighing only 882 grams and 267 mm in length. If you have a smaller case, this might be your most suitable option.

Most of the enclosure is made of metal, which is nice. The backplate is also metal but has no thermal pads.

There’s a red accent on the edge of the GPU and also some RGB. This is nothing too special, but it still looks great.

For increased performance, it is possible to reach 2700 MHz, but the fan curve will need to be very aggressive. In other words, it will be loud with a custom OC.

Impressive thermal results shouldn’t be expected from these reference cards, but they are not too bad either.

Under heavy load, the GPU averages about 76°C, much hotter than all the other variants mentioned above. At least the noise levels stay below 40 dBA, thanks to the steady and tame fan curve.

If you want better thermals, you can always push the fan curve higher.

Your choices should have been narrowed down by this guide, but there are still four different brands to choose from. Which of these is the right option for your situation?

ASUS’s Radeon RX 6700 XT STRIX OC is Best Overall. This GPU doesn’t lack in any aspect. It has the lowest temperatures of all the 6700 XTs, a great factory overclock, and a bit of OC headroom. This is a great choice, even if it comes with a higher price tag.

The RX 6700 XT Reference Card deserves the spot for Best Value. Even if you consider the worse factory overclock and hotter recorded temperature, it’s a great deal for just $469. It is the best bang for your buck, for sure. It’s also the shortest RX 6700 XT.

If you are looking for a smaller GPU but a better design than the reference card, the Gaming X is a great alternative.

The MERC 319 is also a good alternative to the STRIX OC if you are unable to find the ASUS variant at a reasonable price. 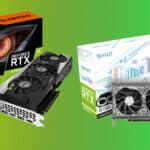