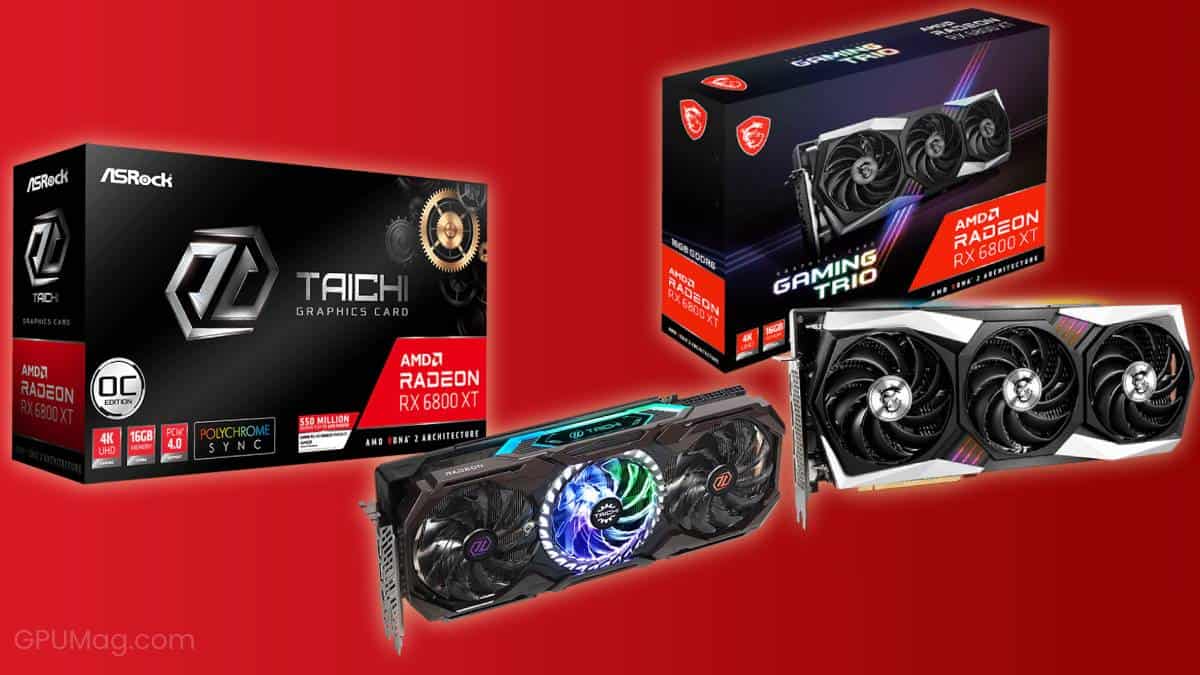 For many years, AMD was not very prominent in the high-end sector of the GPU market. From around 2013 to 2019, they lagged behind. However, once their new architecture, RDNA 2 came into play, things improved greatly.

In late 2020, the RX 6000 series was released, bringing a performance improvement that was comparable to the competition and often even better.

After extensive research, we have created a list of the best RX 6800 variants currently available. 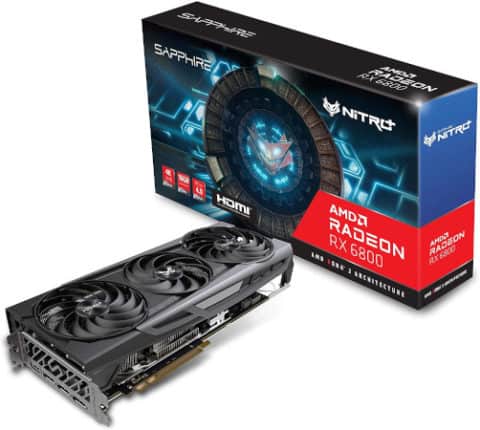 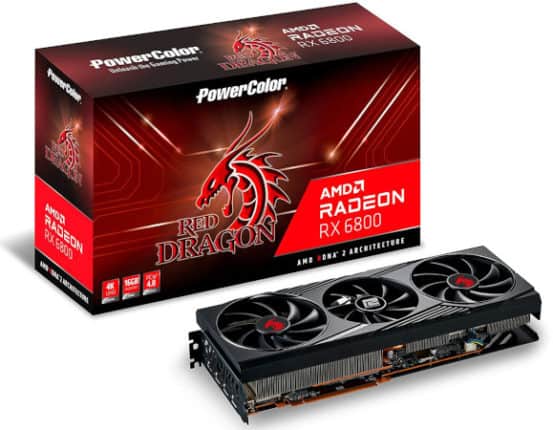 PowerColor might not be as widely known as brands such as ASUS, MSI, Gigabyte, etc., but they always deliver high-quality GPUs with good cooling and impressive factory overclocks. Their previous GPU release left quite an impression; it was one of the fastest, quietest and coolest 5700 XT.

Let’s see whether the PowerColor RX 6800 Red Dragon can leave the same kind of impression.

Unfortunately, PowerColor has not shared any information regarding the MSRP of the RX 6800 Red Dragon. Still, based on previous Red Dragon designs, it should be $50 to $80 more expensive than the reference card.

Let’s delve deeper into its design, performance, and cooling.

PowerColor has been quite consistent with its designs over the years. They usually stick with an all-black shroud and some added red accents.

The RX 6800 Red Dragon is nothing spectacular. You get a standard triple-fan setup, and the entire shroud around the PCB is black with minimal branding. The only logos that can be found are one on the side and one on the back. The side logo is RGB.

The backplate is metal, which is nice to see, but there are no thermal pads under it to improve contact with the PCB.

The Red Dragon might not have anything interesting to offer in terms of visuals, but when it comes to raw performance, it delivers.

On paper, the core clock boosts up to 2140 MHz on the Silent BIOS. With the OC BIOS, the core clock should boost up to 2170 MHz. However, real-life performance seems to be showing different results.

In demanding games such as Cyberpunk 2077, Doom Eternal, and Assassin’s Creed Odyssey, the RX 6800 Red Dragon pushes the core clock nearly up to 2250 MHz on average.

What makes this aftermarket card even more interesting is its overclocking capabilities. With enough trial and error, you could push PowerColor’s Dragon to 2530+ MHz. That’s quite a bit more than what the reference card can achieve, which is anywhere between 2370-2430 MHz.

Even with such a high factory overclock, PowerColor has successfully kept the temperature and noise levels low. With the OC BIOS, temperatures average around 62°C. With the Silent BIOS, the fan curve is a bit lower and smoother, but the average temperature can exceed 70°C. 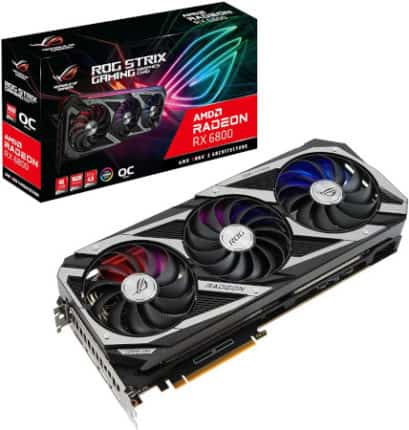 The expectations for ASUS cards are always high, and with good reason. You will rarely see a disappointing release from this company. However, they did lag behind considerably with their TUF lineup in 2019, especially the RX 5700 series. After a few months, they rectified their mistakes and put the TUF back on store shelves with improved cooling.

However, we are not here to talk about ASUS history or the TUF. It’s time to look at what the RX 6800 STRIX OC offers to the masses. This is the company’s known flagship.

If you already have expectations of ASUS, then you know that a STRIX variant will come with a hefty price premium.

However, if it is that much better than the alternatives, it might be worth it.

ASUS rarely goes wrong when it comes to design. They stick to their industrial style with the STRIX lineup and the triple-fan setup.

On the front of this graphics card, you will find three fans. One of the fans is reversed to blow air in the opposite direction. It looks good, and it was supposedly done for less turbulence which ultimately leads to better cooling. Surrounding the shroud are several metal accents/highlights and a black shroud. Compared to previous designs, this one has many new elements added to it, but it still looks pretty clean.

ASUS also satisfied everyone’s RGB needs with a long translucent line across the entire side of the GPU.

The backplate follows the same style that is found on the front. It’s both simple and bold at the same time. The backplate is made of metal and has proper contact with the PCB, thanks to its thermal pads.

This GPU has a boost clock of 2190 MHz. Those are the advertised clocks, and they appear to be true. While playing demanding games such as Cyberpunk 2077 or Metro Exodus, the card boosts up to 2220 MHz but averages around 2200 MHz.

If that is not enough for you and you are into overclocking, ASUS has left plenty of OC headroom. With enough tweaking, users have managed an OC of 2490 MHz. PowerColor’s Red Dragon does push further than that, but they are still quite similar in raw performance.

Even though ASUS has considerably pushed the core clock, the STRIX still manages to stay cool and quiet. With the default performance BIOS, temperatures average around 53°C. That is ten degrees lower than the Red Dragon, which is impressive. Even with such low temperatures, the fans don’t ramp up too much. The maximum system noise recorded by reviewers is around 33 dBA.

Sapphire is and has been the largest supplier of AMD GPUs for a long time. Sapphire has set a standard for performance and cooling over the past few years with its Pulse and NITRO+ AIB variants. Pulse is the cheaper option, while NITRO+ is their flagship product.

Back when the NITRO+ and Pulse versions of the 5700XT were released, both cards were rated quite positively, so let’s see if Sapphire has managed the same for the NITRO+ RX 6800.

This Sapphire RX 6800 has a $100 ($679) MSRP over the reference card. That kind of price hike is unexpected from Sapphire because AIBs such as ASUS or Gigabyte are usually the ones with such a price premium.

For the previous AMD GPU series, the NITRO+ used to be $40-$60 over the reference card.

With some of the information below, you should be able to decide whether those one hundred extra dollars are worth spending.

The overall design style of the NITRO+ has not changed much when compared to the previous generation.

It is still a triple fan GPU, with the two fans on the sides being larger than the one in the middle. The shroud around the fans is mostly black with a few silver accents stretching over the sides.

The execution of the RGB on this card is among the better ones out there. On the side, there is an RGB Sapphire branding and a thin translucent (RGB) stripe on the edge of the card. It looks cool and futuristic.

On the back, there are a few cutouts for improved airflow. In terms of visuals, there is a small RGB logo, and the bracket on the back of the PCB is exposed.

The factory overclock of 2190 MHz is the same as the STRIX variant, which is nice to see and quite surprising. However, that’s where the similarities between the two cards end. Unlike the STRIX model, the NITRO+ RX 6800 continues to boost well above that with stock settings.

In-game, the GPU core boosts almost to 2300 MHz out of the box. That’s one of the best factory overclocks we have seen for this card.

That’s not all. If you want to push the NITRO+ even further, you can. We have seen reports of 2530 MHz overclocks from several reviewers and user reviews. That’s a huge OC headroom.

If a GPU has such a high factory overclock, it makes sense that its thermals might be less acceptable. Fortunately, that is not the case with the NITRO+ at all. Not only is this card quiet, but its temperatures never exceed 50°C during any kind of load. That is better than any other RX 6800 on the market.

It is even better than graphics cards with much lower power consumption, such as the RTX 2060. 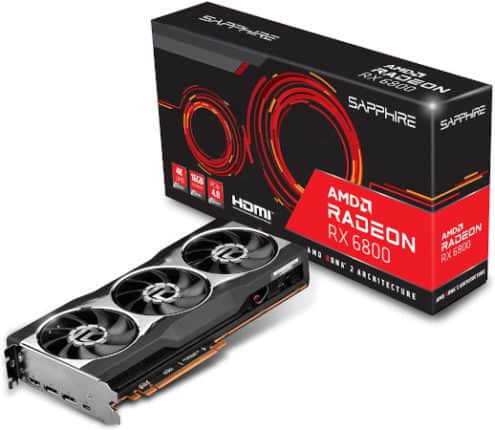 Most people avoid reference cards from both AMD and NVIDIA. This is because they are usually louder, run hotter, and have a lower boost clock. However, this time, both NVIDIA and AMD came up with solid reference cards.

For anyone that doesn’t feel comfortable paying extra money for minimal extra features and improvements in performance, they can simply get an RX 6800 directly from AMD.

The situation is often the other way around, with AMD offering a slightly slower and cheaper variant while NVIDIA has a bigger price tag and a performance advantage. However, for this release, AMD made a brave move that ultimately paid off.

There isn’t much to say about the design of these cards. It is a GPU with three fans surrounded by a shroud that is a mix of black and silver.

A red line accent follows the entire edge of the side of the card. There’s also a red RADEON logo on the side. The logo does light up, but we aren’t sure whether it is RGB or not.

The backplate is made out of metal and the dominant color is silver, which is somewhat rare nowadays. Generally, GPUs are mostly either white or black.

Unfortunately, there are no thermal pads under the plate for better heat dissipation.

AMD advertises a boost clock of 2105 MHz, but the GPU does go a little further than that. During heavy loads, the core boosts up to 2225 MHz.

In terms of overclocking, there is a little bit of headroom. With the max power limit, you could reach around 2450 or even 2500 MHz. However, your mileage may vary.

This is a reference design, so don’t expect anything too impressive in terms of noise and thermals.

During heavy load, the GPU reaches a temperature of 70°C. That isn’t too bad, considering the fans don’t spin up very much. With the fans reaching 1600 RPM, the system noise levels stay below 34 dBA.

Which RX 6800 Will Satisfy Your Needs?

Even after narrowing down the choices for an RX 6800, there are still three options more than you need. Which one is going to satisfy your needs the best? Let’s take a look.

The SAPPHIRE NITRO+ RX 6800 is undoubtedly the best of the best. It comes with a $100 price premium, but considering the impressive OC headroom, the factory overclock, and impossibly low temperatures, it takes the Best Overall crown.

AMD’s RX 6800 Reference Card gets the award for Best Value. It might not be as fast, cool and quiet as all the other AIB models, but it is considerably cheaper. If you manage to grab it for its MSRP, you will get the best bang for your buck.

However, this does not mean that you should remove the ASUS Radeon RX 6800 STRIX OC or PowerColor RX 6800 Red Dragon from the equation. Both of these cards excel in almost every aspect. If you see these available on the market, don’t hesitate to make a purchase. 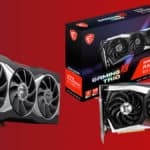