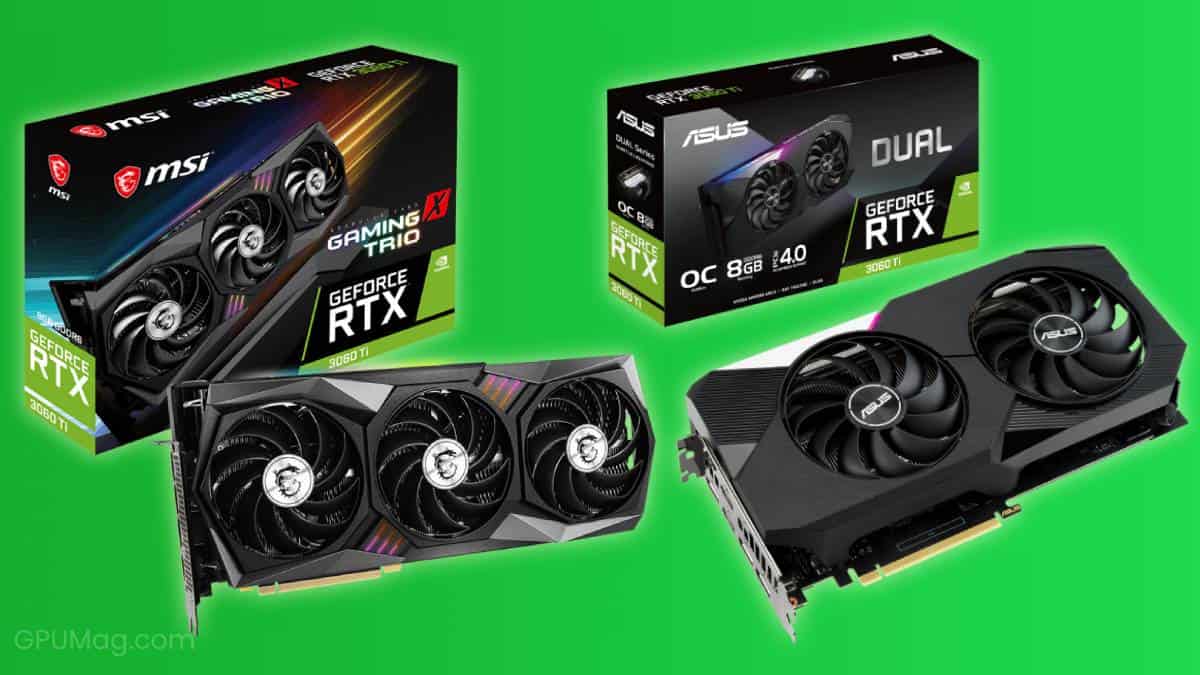 With the release of the RTX 3000 and RX 6000 series, numerous options are available to every PC enthusiast today.

However, all of these GPUs are priced well over five hundred dollars, and not every PC gamer is looking to spend thousands of dollars on building a computer. Fortunately, NVIDIA does offer a great bang-for-your-buck card, the RTX 3060 Ti.

Here is a list of the Best RTX 3060 Ti graphics cards. 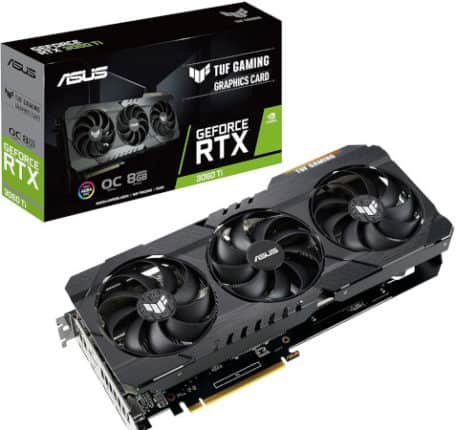 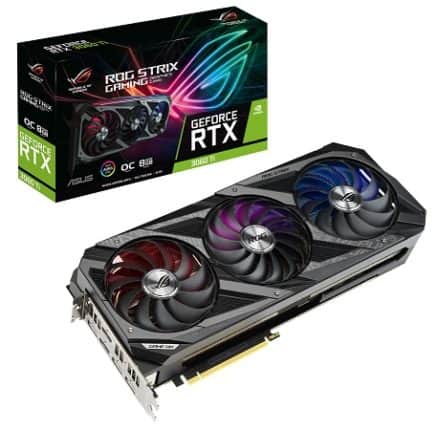 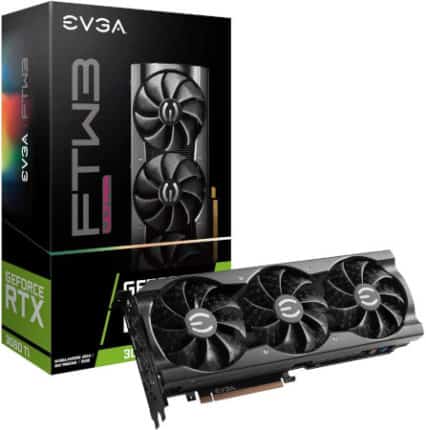 EVGA is a favorite among NVIDIA fans and, with good reason, as it is known for the consistent release of products with adequate cooling and performance while providing excellent customer support.

Customer support might not be your top priority when building a PC, but it’s always a good idea to have some protection. Anything could happen.

In any case, this EVGA variant of the RTX 3060 Ti appears to be just as promising as all the previous RTX 2000 GPUs from EVGA.

To understand where the RTX 3060 Ti FTW3 ULTRA GAMING excels and where it falls short, we need to delve deeper into each aspect individually.

The mid-range and high-end AIB variants start with at least a $50+ price increase, so this is nothing out of the ordinary.

Of course, people that aren’t comfortable paying this extra money can always go for the Founders Edition.

The FTW3 design received a complete overhaul with the RTX 3000 series. EVGA replaced the clear, cheap-looking plastic with a completely black shroud.

The shroud has also shrunk in width, making the three fans the dominant visual element of this GPU. Overall this industrial style looks pretty clean. It will aesthetically fit in with most PCs.

On the side of the card, the visuals haven’t changed. You will see EVGA and GEFORCE RTX 3060 TI written on the side. There’s LED lighting behind the EVGA text (RGB, of course). The other part of the text does not light up.

If you like minimal RGB, this could be a good choice.

The aluminum backplate has stylish honeycomb-pattern holes and a red line/accent.

Sometimes, a metal backplate can be used as a heat spreader, but there is no clear information as to whether or not the backplate has direct contact with the PCB to offer this feature.

In 3DMark – Time Spy at 1440p, it is faster than MSI’s, Gigabyte’s, and ASUS’s (TUF) versions, achieving a score of 12,329. Keep in mind; the difference in score between the different models is minimal.

There probably isn’t much headroom for additional tweaking with such an impressive factory OC to the core clock.

EVGA claims a maximum power draw of 200 W, but that doesn’t appear to be the case. Instead, multiple sources state that this GPU can reach a power draw of 240 W during heavy loads.

There are a few other AIB variants that demand this amount of power, but most other options draw about 200 W.

However, this shouldn’t scare you away. Although the GPU is a bit more power-hungry than others, it still maintains a cool temperature of around 67 °C. The fans don’t spin above 1,600 RPM at this temperature, so you shouldn’t have to deal with too much system noise.

When looking for a premium GPU, many people focus on ASUS, specifically the Strix lineup. This design has been proven to cool efficiently, whatever the power draw. Overall performance and overclocking are also quite good on these models.

The ROG Strix RTX 3060 Ti is no different. You will get what you expect from this GPU.

Let’s see exactly what you would get for such a price premium.

If you are unfamiliar with ASUS, you should know that they love putting a hefty price premium on all of their ROG products.

The RTX 3060 Ti receives a $100 price hike over the Founders Edition, making it about 25% more expensive. For many, this won’t be justifiable. However, if you find comfort in reliability, high-quality materials, and longevity, Strix is the correct choice.

The ROG Strix design received a complete overhaul with the release of the RTX 3000 and RX 6000 series. It shares some visual similarities with the design of the GTX 1000 and RTX 2000 Strix GPUs, but it is much bolder this time around.

As with any Strix design from 2016 onward, there is a triple-fan setup on the 3060 Ti. Around and between the three fans are some metal accents, exposed bolts, and screws. This gives an impression of a strong and rigid GPU.

There is a dashed transparent line and another line beneath that. Both of these visual elements light up with the RGB LEDs located under them. The side-view has been thoroughly reworked and rethought, making it a great addition to any glass panel computer case.

The rear has a metal backplate with several cutouts and silver accents. The metal cutouts provide improved airflow. Several thermal pads can be found under the backplate and are used to improve heat dissipation.

In general, don’t expect anything too crazy. The ROG Strix RTX 3060 Ti is only a few percent ahead of the Founders Edition, which is predictable.

On paper, the core clock should boost up to 1860 MHz with Gaming Mode enabled and up to 1890 MHz with OC Mode enabled. However, it is no secret that the RTX 3000 series GPUs frequently clock up much higher than advertised.

During full load or gaming, the card can achieve up to 1965 MHz based on several benchmarks. At that peak, the power draw is around 240 W, the same as the FTW3.

Things become more interesting when it comes to manual overclocking. With enough tinkering, you could push this beast of a 3060 Ti up to 2130+ MHz.

With such a high OC, expect a performance increase of 5% to 10%.

If you want lower temperatures, you can switch to the default Performance BIOS. By doing this, you will reach the same clock speeds with a fan speed of 1750 RPM and 58 °C. Either BIOS option provides a silent experience.

The pricing for the Strix is overkill. Many aspects of the ROG Strix can be overkill for most people. This is where the TUF RTX 3060 Ti Gaming comes in. It is the younger, less expensive brother that delivers similar performances in both overclocking and cooling.

This means you can’t expect the same level of performance, but it’s still plenty to satisfy your gaming (or work) needs.

The design, in comparison to the Strix, is much more subtle. There are no exposed bolts, metal accents, or crazy RGB features. It has a mostly black shroud with three fans on the bottom.

On the side, there is an RGB TUF Gaming logo.

On the rear, there is a metal backplate without any kind of thermal pads that improve heat dissipation. There are also several cutouts on the plate itself. That brings better airflow and also makes the card more visually interesting.

There are tire markings on the back. This isn’t a great addition to the design of the GPU, but, fortunately, that design feature is not very noticeable.

The factory overclock of this graphics card is not going to impress you too much. During heavy loads, the core clocks push up to 1900 MHz based on several benchmarks and reviewer testing.

This is probably because the power limit is set to 200 W. If you increase that limit and do some overclocking, you might see some improvement.

The TUF RTX 3060 Ti Gaming might not be pushing for the best possible clock speeds, but it does excel in cooling. In most situations, it has even better cooling than the Strix model.

During gaming, the TUF variant saw an average of 58 °C. Because of these low temperatures, the fan RPM is pretty low too. The overall system noise won’t even exceed 35 dB. 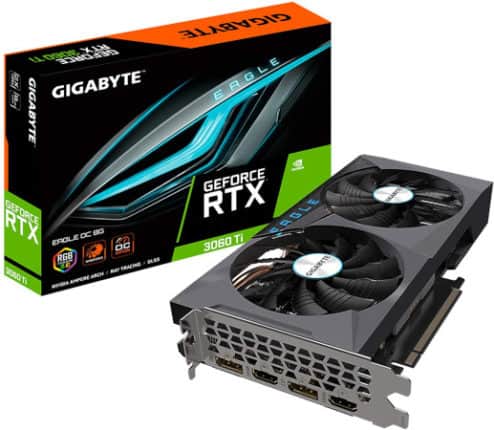 Gigabyte has several variants of the 3060 Ti. Some are more expensive while others are much less so. This time, the cheaper model has managed to grab a spot on this list. It’s always good to have a more budget-friendly, small, and compact option, such as the RTX 3060 Ti EAGLE OC.

The MSRP of this Gigabyte variant is around $430, although it’s possible to find it even lower than that. In other words, it is not much different from the Founders Edition in terms of pricing.

There are several reasons why this model is so much cheaper than the other options on this list. Let’s explore them.

This is the only graphics card listed in this guide that does not have the standard triple-fan setup. The Eagle OC has only two fans. That isn’t necessarily bad; it’s great if you have a smaller case.

On the front, there isn’t much to see except the two fans and the EAGLE logo above them. On the side, there’s a small light bar just to satisfy people’s RGB lighting needs.

On the rear, there aren’t any complicated designs, just some branding and a cutout for better airflow.

This card runs close to the advertised boost clock, which is rarely seen with RTX 3000 GPUs. However, that is to be expected considering the price, shape, and size of this card.

The power limit can be pushed slightly to achieve about 1750 MHz, but that is what you should expect from a $430 card.

Due to the lack of a third fan, the two fans ramp up to 2000 RPM just to reach a comfortable average temperature of 70 °C. That’s probably too loud for anyone’s taste.

Fortunately, with a bit of tweaking, it is possible to reach a stable and lower fan curve that is less noisy.

Even after reducing your list to just these four cards, choosing the right one can still be challenging. However, a few of them excel in certain aspects.

The Asus ROG Strix RTX 3060 Ti OC gets the Premium Pick award. It does come with a premium price tag, but it’s also premium in terms of cooling, performance, and material quality. If you have the extra cash, go for the Strix.

The Asus TUF RTX 3060 Ti Gaming is the Best Value king. t may not be as fast or pretty as the Strix model, but it is quieter and cooler.

The Gigabyte Eagle OC is a bit cheaper, but it lacks in every aspect when compared to the TUF. However, it is a great pick if you are looking for a compact solution. 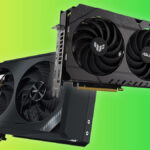