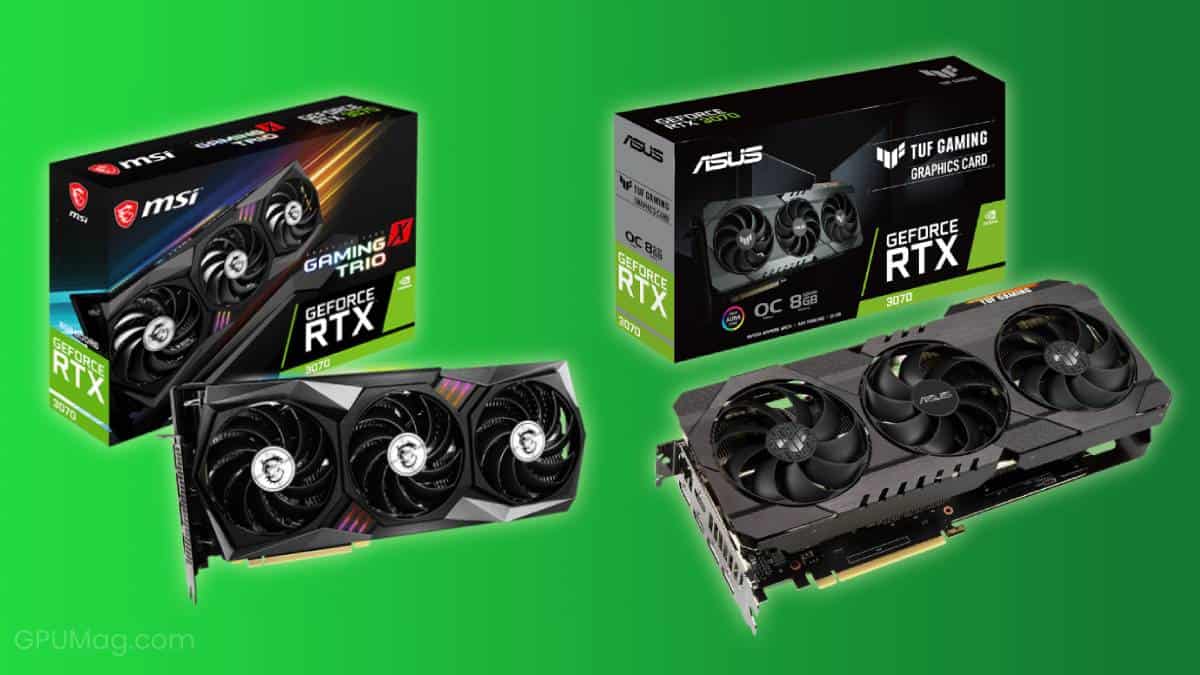 It isn’t always about getting the best of the best installed on your computer, mainly because the best is usually the most expensive. Most enthusiasts are looking for the best bang for their buck.

The RTX 3070 and RX 6800 are exactly what most PC gamers have been searching for.

However, it seems that many PC gamers are leaning toward the green side, NVIDIA. Mostly because the 3070 offers better ray-tracing performance and has DLSS.

With DLSS active in games such as Cyberpunk 2077, Death Stranding, and Control, you can gain a huge FPS boost without losing any graphical fidelity.

However, with so many variations of the RTX 3070 on the market, you could have trouble making the right decision.

With this list of the best RTX 3070 graphics cards, you should be able to decide whether to buy from ASUS, MSI, Gigabyte, Zotac, EVGA, or other AIB manufacturers. 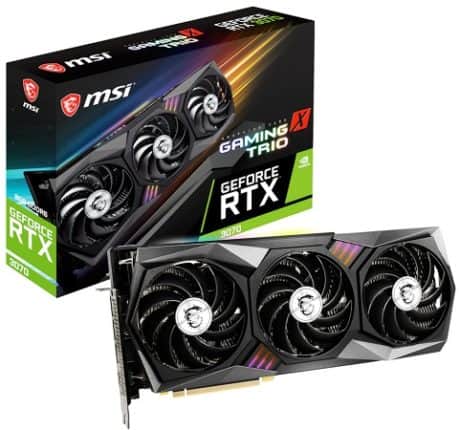 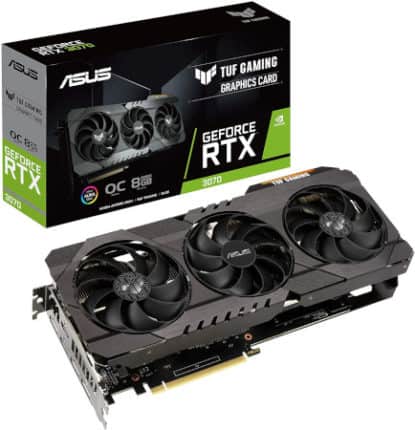 Whether you buy low-end or high-end GPUs from MSI, the result is always the same: you will be satisfied with your purchase. MSI rarely releases groundbreaking ideas or amazing designs, but they stay very consistent.

Either way, getting your hands on the right RTX 3070 AIB variant is likely to prove difficult with so many alternatives on the market. Of the bunch, the RTX 3070 GAMING X TRIO is a definite contender for best overall. This thing delivers in (almost) every aspect.

Sixty dollars extra is not awful, but it isn’t great, either. A final opinion can be formed after checking out what competitors offer.

The GAMING X TRIO continues the triple-fan standard with an all-black plastic shroud. There are a few silver elements added on the front and around the fans, but, on the whole, its look is quite simple and straightforward.

On the side, there is a logo with MSI text next to it, both of which have RGB lighting. Right next to these, there is a white GEFORCE RTX sticker, which does not light up.

Above the two logos, there is a long white and translucent plastic strip, which also has RGB lighting. Unfortunately, it seems MSI wanted to save money on the LEDs because there aren’t enough to light the entire plastic strip seamlessly. The separate LEDs behind the white plastic are noticeable.

For a card that costs $560, this isn’t unacceptable.

The specifications on MSI’s official product page show a core clock boost of 1830 MHz. This is almost 100 MHz faster than the Founders Edition. Even considering the price premium, that sounds like a good factory overclock.

However, according to various sources and benchmarks, the GAMING X TRIO has been seen boosting to about 1950 MHz. This is quite impressive, but there may not be any user overclocking.

Fortunately, many users of this GPU have reported that they successfully pushed the core clock from 1950 MHz up to 2040 or even 2050 MHz. That is a considerable improvement, although it will not be as impressive during the in-game performance.

With custom overclocking, expect an FPS boost of around 3% to 5%.

Until now, the GAMING X TRIO RTX 3070 has seemed like a great choice, but are the fans and heatsink good enough to withstand 245 W of power consumption? That’s about 20 W more than the 3070 FE.

Numerous reviews and users report that this MSI GPU rarely exceeds 65 °C. That is pretty good, considering how powerful the 3070 is. The GDDR6 memory, the PCB, and the VRMs run cool on this MSI. The PCB averages around 49 °C. What’s even better is that the fans spin up only when the GPU die reaches a temperature over 60°C. When they do, they are still relatively silent. Overall, the GAMING X TRIO 3070 has great thermals and cooling.

The Strix models from ASUS have always ranked in the top three in terms of cooling and performance. However, they also come with a big price premium. If you prefer ASUS and want the best bang for your buck, there are some more affordable variants available, such as the ASUS RTX 3070 TUF GAMING.

In the past, the TUF GAMING lineup wasn’t exactly impressive. Back when AMD’s 5700XT was released, the TUF GPUs had awful thermals and cooling. This was quickly rectified after a few months.

That isn’t a great sign, but ASUS has redeemed themselves and are finally making a comeback with their cheaper variants. Let’s see whether or not the TUF can keep up with the X TRIO.

This is to be expected, and there will probably be no other custom AIB card at this performance level that is cheaper. It’s safe to say that ASUS hit the sweet spot.

However, the price is only good if the graphics card performs as well as it should.

If you look at the design of the STRIX models, you will notice that ASUS prefers a strong and industrial design style most of the time. This includes jagged edges, metal accents, bolts, screws, etc. They also use a lot of RGB.

This time around, however, the TUF is much simpler. The RGB lighting is also minimal.

On the front (or bottom), we again see the standard triple-fan setup. All three fans are the same size and black. The shroud around the fans is black/grey. There are no additional elements or accents.

It is very simple, which is not necessarily a bad thing, especially if you prefer a more modern and minimalist style.

The only RGB can be found on the side with the TUF logo and a small line/slit under it.

On the back, there is an aluminum backplate. This is always nice to see, but it doesn’t have any direct contact with the PCB, which means it is not used as a heat spreader.

Out of the box, ASUS claims a boosted core clock of 1815 MHz. If you want to push the TUF for a bit more FPS, you may want to enable the OC Mode to 30 MHz more.

Several benchmarks and users report a higher boost clock than that. In GPU-demanding games, the TUF can comfortably sit at around 1890 MHz. This shows potential for an even better OC.

You might think that one of the cheaper variants of the RTX 3070 would be unable to withstand any additional power and temperature for a faster core clock, but benchmarks show that the TUF can easily pass the 2.0 GHz mark. With enough tweaking, 2030 MHz is possible. Your mileage may vary, however.

The power consumption of the RTX 3070 TUF GAMING is very similar to the GAMING X TRIO, averaging around 240-245 W on heavy loads.

As this is an overall smaller GPU than the MSI variant, worse thermals are to be expected, but that is not the case here. Even with a smaller heatsink, ASUS has successfully delivered appropriate cooling.

Even on heavy loads, the temperature of the GPU die doesn’t exceed 65 °C. In fact, it averages around 62 °C. The PCB is even lower than that, at just 54 °C. The VRMs and the GDDR6 memory also manage to stay cool during heavy gaming.

The GAMING X TRIO does perform better, but the TUF is very close. 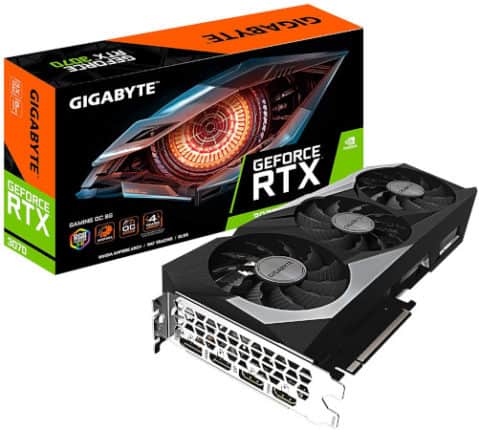 If you are ever considering whether you should get a Gigabyte GPU, there are a few things you should know about their previous AIB models.

Throughout the past several AMD and NVIDIA releases (GTX 1000, RTX 2000, RX 500, and RX 5000 series), Gigabyte has delivered both adequate cooling and solid performance in the lower-end and higher-end segments.

For the RTX 3000 (and RX 6000) series, you should expect the same kind of results. In terms of pricing, the RTX 3070 GAMING OC 8G can be found somewhere between the cheaper and premium models. Let’s see how well it fares against the TUF and X TRIO.

The MSRP of the RTX 3070 GAMING OC 8G is $570. That doesn’t sound too promising, considering that the X Trio and TUF Gaming are priced lower than that.
A few dozen dollars’ difference might not seem like a lot, but if that small price increase is not justified, no one should be or will be buying Gigabyte.

Let’s delve deeper into the design, performance, and thermals to see exactly why it is $70 more than the Founders Edition.

For those extra few dollars, you shouldn’t expect anything groundbreaking in terms of visual appearance. That proves to be the right attitude; the RTX 3070 GAMING OC is quite similar to the TUF GAMING. It is simple, with the usual triple-fan setup.

However, the overall design seems a bit flat and dull, even if you prefer simplicity. The TUF GAMING executes the same kind of style much better.

The card also lacks a bit of RGB lighting. The only “shiny” thing on this card is the Gigabyte logo on the side.

The backplate does have a more interesting appearance, especially with it being metal (presumably aluminum). Unfortunately, like the TUF, there are no thermal pads to create contact between the backplate and the PCB.

Overall, the card looks good, but it is definitely not a leader in this segment.

If you were disappointed by some of the information above, you would be glad to hear that this Gigabyte card does not disappoint when it comes to power, performance, and overclocking.

Several reviews report that the power draw for this graphics card is a bit higher than the alternatives, but there is a good reason why. Although the official specifications show a boost core clock of only 1815 MHz, this GPU easily jumps up and stabilizes between 2000 and 2050 MHz.

Remember, to get the maximum power limit and best factory boost clocks, you will need to switch to the OC Bios.

Naturally, with a higher power limit and factory overclock, this GPU is going to produce a lot more heat, and that is definitely noticeable.

While the TUF and X TRIO rarely went over 65 °C, the GAMING OC 8G quickly reached an average temperature of 70 °C. That is a lot more, but considering the performance you can gain with that extra heat, it doesn’t seem too bad.

All three of these variants of NVIDIA’s RTX 3070 perform well in every aspect while also coming at a fair price. The worst-case scenario is needing to pay $70 more than the Founders Edition.

At the end of the day, finding any NVIDIA FE card is usually near impossible. In other words, any of these three cards is a great deal.

Which one of these is the best graphics card for you?

The MSI RTX 3070 GAMING X TRIO is the Best Overall option because of its impressive thermals, good boost clocks, and design. The card is great in almost every aspect.

The ASUS RTX 3070 TUF GAMING gets the Best Value award. The TUF is just as good as the X TRIO. Ten dollars might not be a lot of money, but you could invest it in a slightly better motherboard or even more RAM.

Because of the slightly higher price tag, the GIGABYTE RTX 3070 GAMING OC 8G doesn’t really fit into any of our awards. It’s still a good card, though.

Any one of these three graphics cards would be a solid choice. 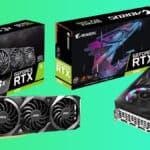