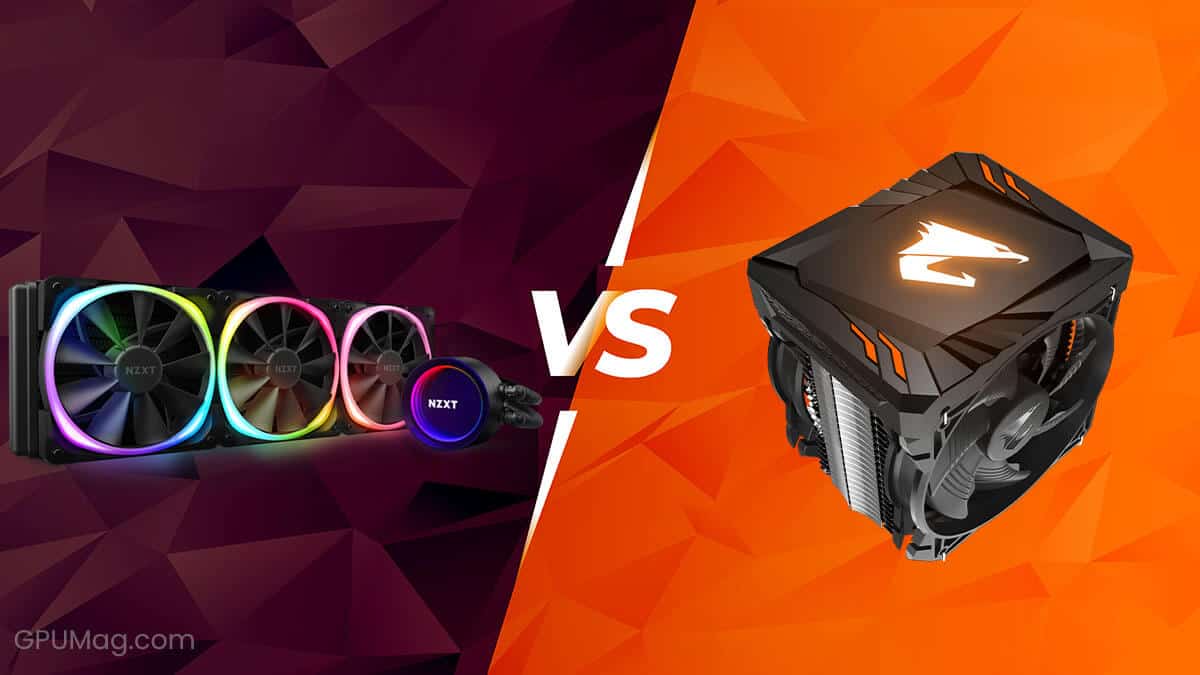 It seems as though PC enthusiasts around the world have been debating this topic forever. Half believe that a CPU is best cooled with an air cooler, while others believe that an all-in-one closed-loop liquid cooling system is superior.

The latter option is a bit of a mouthful, which is why we’ll use the term AIO throughout this article.

Even after many years of both sides presenting their arguments, it is still unclear which option is better.

If you are also struggling to decide which type of cooling is right for your processor, we have gathered all the necessary information and considered factors such as noise, thermal performance, ease of use, and others to provide you with the final answer to this question.

Why Does Your CPU Need Cooling?

Before we can discuss which type of cooling you need, we first need to explain exactly why CPUs require cooling.

The central processing unit (processor or CPU) handles the most important logic and arithmetic operations of the computer while also controlling and coordinating with every piece of hardware connected to the motherboard. To put it simply, it’s the brain of a computer.

This wasn’t always the case. In the past, CPUs were much simpler and slower, requiring only a basic heatsink without any kind of active cooling. In fact, some models could even run without a heatsink. If you tried that today, your PC would probably melt through the table.

A great example is today’s high-end Intel processors, which can consume up to 300W of power during very heavy loads. Such a large amount of electrical energy has to be dispersed and dissipated in the form of heat.

Because of this huge leap in clock speeds, cores, and threads, processors require a lot more help for heat dissipation, hence the increased demand for AIOs and air coolers.

With a better understanding of why your CPU needs to be cooled, we can now look at the different factors that will help you choose the perfect cooling option.

One of the main elements that must be considered when choosing any kind of air cooling is the product’s thermal performance.

Before buying a cooler, it is essential to do your research to determine whether it will be sufficient to keep your CPU cool. That should help you decide whether to go for an AIO or an air cooler.

Here’s an example. AMD’s mid-range 6-core processor, the Ryzen 5600X, is rated with a TDP of 60W. Its maximum power consumption is about 140W, which would only happen in extreme cases.

Cooling this type of processor is much easier than cooling Intel’s 8-core processor, the i11900K, which peaks at almost 300W power draw. Again, this is only in extreme cases, but it is still much more power-hungry.

Which cooler you should get depends on the CPU in your PC.

Usually, high-end liquid coolers provide much better thermal performance than even the best air coolers, such as the Noctua NH-D15. Keep in mind that the temperature difference is unlikely to be more than 5 degrees Celsius.

You should also consider that AIOs take five times as long to reach a steady state in comparison to air coolers. In other words, it would take about 400 seconds for a high-quality AIO to reach max temperature while its air equivalent would achieve that same state in 80 seconds or even less. In this case, longer is better.

All-in-all, liquid coolers can provide better cooling, but the thermal performance of air coolers is nothing to scoff at either. Still, we give this point to AIOs.

Another factor that could be even more important for many PC enthusiasts is noise. Or, to be more specific, the lack of it.

Both air coolers and AIOs can come with one, two, or sometimes even three fans. The role of these fans is to maintain the air circulation in the case, effectively helping the heatsink (or radiator) dissipate heat more efficiently.

Without these fans to improve circulation, both types of coolers would become essentially useless during heavy CPU loads.

Fans automatically adjust their RPM (revolutions per minute) to minimize noise based on the processor’s temperature and fan curve. As the temperature rises inside the PC case, the fans start to speed up, pushing or pulling more air but also generating more noise.

The amount of noise generated depends on the quality of the fans and the efficiency of the heatsink/cooler itself.

Liquid coolers produce far less noise during a session of heavy gaming in comparison to an air cooler, thanks to the increased time taken to reach that steady state. Air coolers quickly start increasing the fan speed to keep up with the sudden rise in temperature.

This is another point in favor of AIOs.

By now, you might be convinced that AIOs are clearly the superior option for cooling processors. They are quieter and provide better thermal performance, but it wouldn’t be fair to make a decision based on those factors alone. Let’s take a closer look at the practicality of these products.

When buying a cooler, consider that you might need to install it yourself unless you ask a more experienced friend or pay a professional.

Installing an air cooler is usually very straightforward. You only need to add the necessary brackets on the motherboard, apply thermal paste, align the heatsink with the CPU and attach it to the brackets, add the fans to the heatsink, then connect them to the motherboard. That’s it.

Even if it is your first time and you need to follow instructions, it shouldn’t take more than five or ten minutes. It is simple, practical, and fast.

Other than that, there isn’t much you need to do. If you want, you can experiment with the fan curve in your motherboard’s BIOS, but that’s about it. There’s no need for any additional software.

AIOs, on the other hand, tell a completely different story. Even users with extensive experience sometimes have trouble installing these things into a case.

First, you will have to sort through several different brackets to find the ones that match your motherboard. You then need to screw the fans into the radiator, ensuring they face the correct direction while also making sure that the cables are positioned properly.

Once the brackets are installed, and the fans have been added to the radiator, you can start screwing in the pump. While working, the radiator will be in your way, making this task even more complicated. Screw the radiator into the case, and you are finally done.

No, wait, there’s more. You must also plug in the cables for the pump and the fans. If there’s RGB, you will need to plug in those cables in the relevant headers. If you want control over the RGB and other features of your AIO, you will also have to plug in a USB2 header.

This whole process can take hours. Once you are done, you may have to download the AIO’s software and do some optimizing there too. NZXT’s CAM software allows you to edit the fan curve, the RGB lighting, etc. Unfortunately, software like this is often buggy or broken.

This is one area where AIOs are seriously lacking. They are very unfriendly toward the user, so air coolers earn a point here.

You may have heard rumors about the dangers of using an AIO, particularly the dangers of a leak. Those aren’t only rumors. There is indeed a higher possibility of failure, which could ultimately result in a leak.

That isn’t the only problem. A leak has the potential to damage some of the most valuable parts of your computer, including the GPU, motherboard, hard drive, SSD, etc.

Liquid coolers have several parts susceptible to failure. The pumps, tubes, radiators, and fittings can fail after long-term use. The liquid inside the closed-loop could permeate, reducing the product’s thermal performance.

Air coolers, on the other hand, have only two points of failure. The fans can fail, but they are also easily and inexpensively replaced. The other point of failure is the cold plate (the plate on the AIO in direct contact with the CPU). It could chip, break, or have production errors that result in bad performance.

It’s important to note that the failure rates for high-quality AIOs today are very low. Fears of a possible leak are not supported by any concrete evidence or statistics. If maintained properly, pumps could last for 6-7 years or more.

Still, air coolers have fewer points of failure and can last much longer. When it comes to reliability and longevity, air coolers get another point.

When shopping for an air cooler, budget is definitely a factor you should keep in mind.

The consensus here is that air coolers are always the cheaper option. You could purchase a be quiet! Pure Rock 2 for around $50-60, and it will be more than sufficient to keep most high-core count CPUs cool.

If you want the best of the best, Noctua’s NH-D15 is what you need. You could grab this air cooler for less than $100.

On the other hand, most high-quality AIOs are priced over $100. For example, the Kraken X62 is one of the better liquid coolers on the market, but it comes at a cost of around $140. Corsair’s Hydro Series H100i Pro is another great option with a price tag of $120.

Keep in mind that you will ultimately get better performance and a quieter PC with these premium prices. Ultimately, it’s up to you to decide whether spending the extra money is worth it.

Designs, styles, and overall PC aesthetics are purely subjective. We can’t tell you what you should like or dislike.

However, we can’t ignore the fact that a lot more thought goes into the design of an AIO. Its features can include black braided tubes, RGB fans, a pump with RGB LEDs or an LED display, etc. Overall, these products are made using high-quality materials that are easy on the eyes and smooth to the touch.

Air coolers, not so much. Take the NH-D15 as an example. It’s a huge block made of aluminum combined with the default dark and light brown fan, and it could look incredibly out of place.

We understand that some people don’t care about aesthetics and only want the best price per performance, but it’s still a factor we can’t ignore.

Air or Liquid – Which One Is Best For Your PC?

After going through all the points above, we ended up with a tie. Each type of cooler excels in different areas.

So, which type should you go for? It depends on what you are looking for.

If you want the best thermal performance to cool a high-core count chip such as the 11900K or the Ryzen 5900X, you should absolutely go with a liquid cooler. AIO is also the ideal choice if you want a silent-running system and one that looks aesthetically pleasing.

However, for people that are on a tight budget for a PC build, an air cooler is highly recommended. It’s also a great choice for those that are building a PC for the very first time. 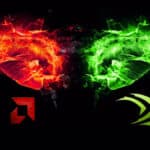