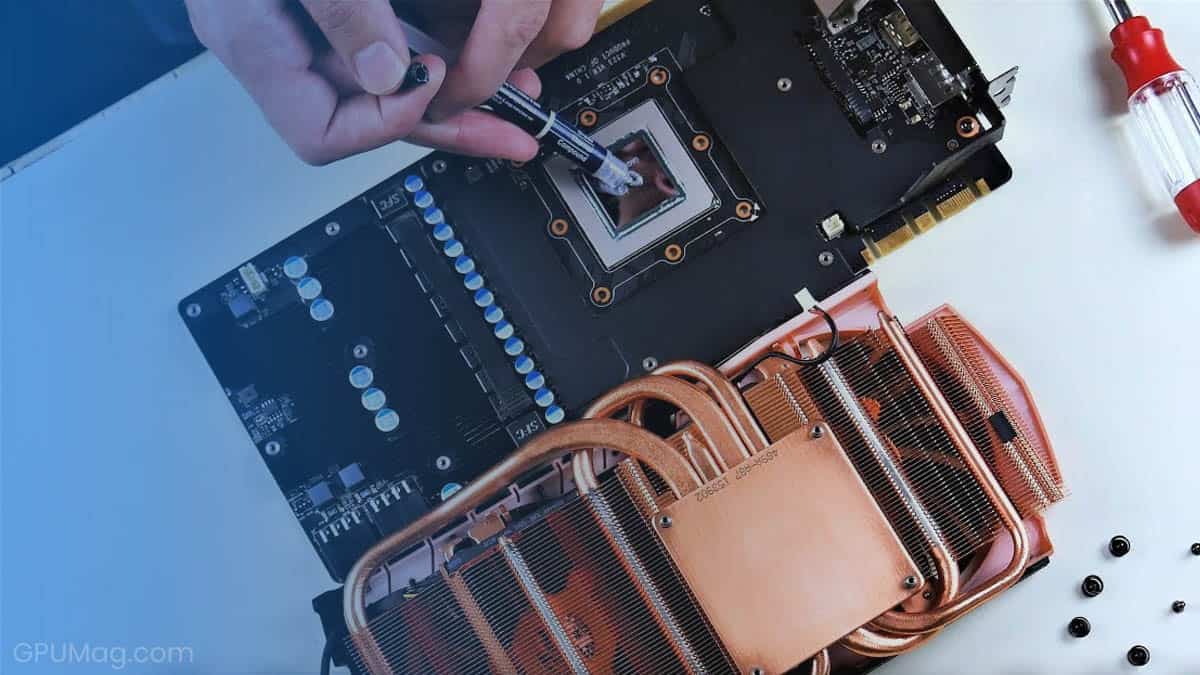 Applying thermal paste is an essential skill for any would-be PC builder.

If this is your first time applying thermal paste, you have likely heard numerous horrifying stories about fiery hardware destruction.

Thermal paste is often confused with thermal adhesive because of its ‘gluey’ look and feel, but they are very different. Thermal adhesive is used to bond a heatsink with an integrated circuit. In contrast, thermal paste doesn’t have adhesive qualities and is responsible for conducting heat from the chip to the heatsink.

Let’s look at how to do this for both the GPU and the CPU.

Applying The Thermal Paste To A New CPU Or GPU

It can be a bit demoralizing for a newbie to purchase a high-performance CPU and then discover they have to perform an unfamiliar task that can potentially mess up their hardware. The situation is even more confusing due to the various possible methods of applying thermal paste.

It would be misleading to say there is no unsafe way to apply thermal paste. There is, but some guidance and common sense will enable you to apply the ideal amount in an appropriate way.

It is important to know that some CPU coolers come with a pre-applied thermal paste. If that is not the case for you, then you’re going to have to do it manually.

Step 0 – Getting The Right Paste

Before beginning the process, it’s important to choose the best possible paste.

The usual rule of thumb applies here: the more expensive the thermal paste, the better it will perform. As always, there are some exceptions to this rule, but this approach will generally apply.

You want a higher quality thermal paste to conduct heat from your CPU to the heatsink more efficiently, although a cheaper one will usually perform its role well enough.

As the thermal paste isn’t expensive, you are probably best off spending a few extra bucks for your own peace of mind, if nothing else. Another helpful feature is that the thermal paste usually comes in its own container that resembles a medical syringe, which enables you to apply the paste slowly and precisely.

This means you can only apply too much paste if you intentionally squeeze out too much. In reality, you’re far likelier to apply too little.

Before you start, remember that you should only apply the thermal paste after you’ve installed the chip on the motherboard and secured it. The paste will be placed on top to conduct heat to the heatsink, and it has absolutely no relation to the connectors.

If you’re installing a new CPU to an old motherboard, you will detach the socket’s latch (retention arm), unscrew the screws, or both, depending on your motherboard. In any case, you should consult a manual for your specific motherboard model.

After you’ve done this, hold the chip gently by its sides to avoid damaging the pins. There is usually an indicator (a small triangle) to help you accurately align the CPU with the motherboard’s socket.

After the chip is secured by the latches or the screws, it’s time to add the heatsink to the equation. Remember that it won’t be held together by the thermal paste, which, as we mentioned earlier, has no adhesive properties.

Before placing the heatsink onto the chip, we first need to apply the thermal paste.

There are several different methods, but the most commonly used ones are the ‘dot’ method and the ‘cross’ method.

With the ‘dot’ method, you apply a dot the size of a grain of rice to the center of the CPU and lower the heatsink with a firm but even force. Of course, you shouldn’t slam it down or apply your body’s full force. You simply place it down and try to make it equal on all sides.

A good rule of thumb for this method is to look at the capacitors around the CPU and try to keep the paste about that size. This way of applying thermal paste is the most commonly used, and it’s usually quite safe.

This method is pretty reliable and won’t cause any extra spillage.

If you want to be on the even safer side, you can use the ‘cross’ method, which is exactly what it sounds like. You draw a straight line from one corner to the opposite corner, then repeat the process and connect the other two corners, with the two lines intersecting in the middle.

Important note: Don’t draw the lines all the way to the edges; you should try to remain inside the CPU borders as much as possible.

The lowering of the heatsink is pretty much identical to the other method, with equal force distribution.

There are plenty more ‘drawing’ methods, but they generally yield the same results. You can use the ‘line’ method or the ‘spiral’ method,’ and they are precisely what they sound like. You can even draw a smiley face, although we’re unsure if it improves the results.

Things To Look Out For

There are two more ways of applying the thermal paste, and they’re not pattern-type solutions like those mentioned above.

If you apply too little thermal paste, there likely won’t be enough of it to conduct heat properly, and you might have overheating problems with your CPU or GPU.

However, if you apply too much thermal paste, you will have a different problem.

Of course, the heat will pass through properly, but too much paste may cause it to spill over the sides when pressure is applied to the heatsink. This is not a huge problem, but it can be tedious to clean thermal paste off the motherboard.

We’ve described the CPU process, but it is pretty much identical for the GPU.

You will need to open your graphics card to expose the chip. If you’re unsure how to do that, there is a nice guide below:

There are plenty of reasons to change the thermal paste on your GPU or CPU.

If you notice that either component is overheating, you should first check whether you need to clean the dust or if the fans are working properly. If you do this and the overheating problem persists, the time has probably come to change the thermal paste.

To do this, you will first need some new thermal paste. Once you have it, you can work on removing the GPU from the motherboard or the heatsink from the CPU.

When you unhook the heatsink from your chip, you will be able to see firsthand how effective your previous application of the thermal paste was.

If you used the ‘dot’ method and the paste wasn’t spread out evenly, you might try the ‘cross’ method this time.

Before proceeding, you should first remove both the heatsink and the chip from the board, as the next part of the process could inadvertently damage it.

There are two different opinions on how to remove the residual paste, and while both do work, the best method is probably a combination of the two. For the largest piece of the paste, you can use a microfiber cloth or, if you don’t have one, a paper towel.

When holding the chip, make sure to hold it by its sides, otherwise, you may damage the pins and render it useless.

You’ll want to use rubbing alcohol with the percentage of isopropyl alcohol as high as possible and dampen the cloth before gently rubbing the paste off.

The best strategy is to start gently in order to get a feel for the brittleness of the chip. This isn’t to say that it will fall apart in your hands, but it will help you remember not to apply too much force from the start.

Once you have rubbed off most of the remaining paste, you may notice some nooks and crannies that are still dirty. Even if you can’t see this, it’s recommended that you perform the next step.

You will need to use a cotton swab with alcohol to reach those tight spots. This is the only way you can guarantee the cleanliness of the GPU or CPU.

After you have thoroughly cleaned the old paste, you can proceed with the application of the replacement. The instructions are the same as when applying them to a new CPU, so we won’t repeat ourselves.

If you notice an uneven spread of the existing paste or if your paste quickly stopped conducting heat properly, you might want to change your application method.

GPU Fans Not Spinning? Main Causes And How To Fix