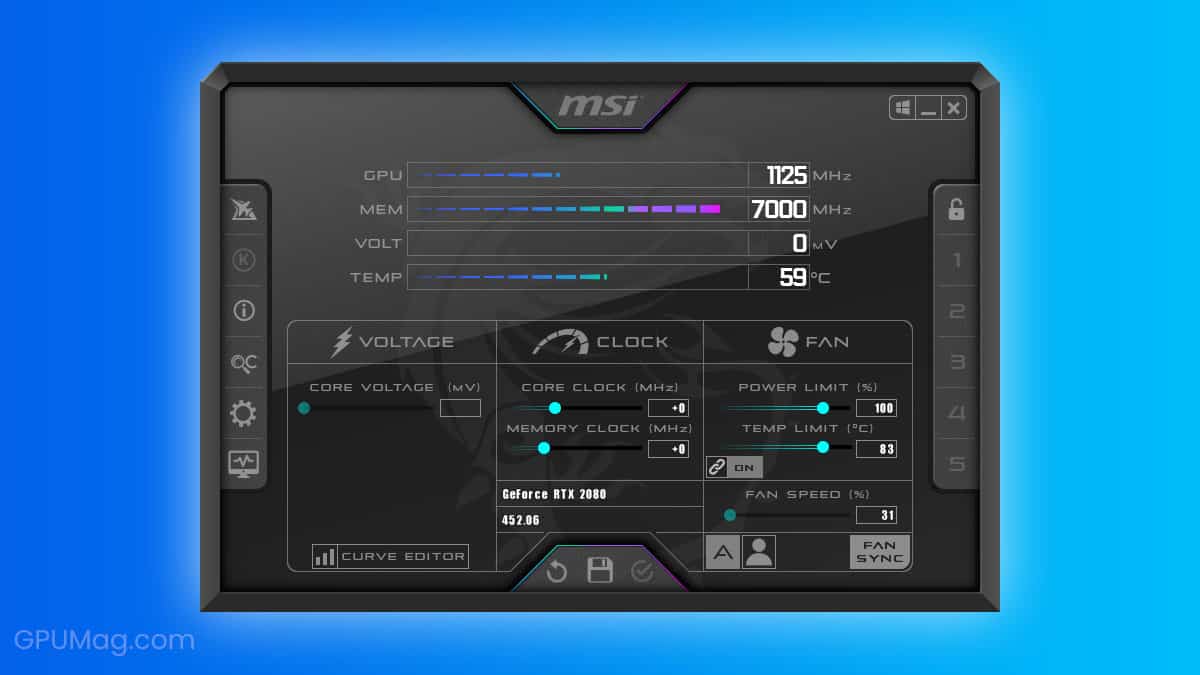 MSI Afterburner is a popular GPU monitoring and benchmarking tool. Fortunately, it is also a piece of software that is easy to download and use. In addition to monitoring, it can also be a perfect tool for overclocking and underclocking your GPU.

One thing that might deter new users is the MSI name, so let’s avoid that confusion right now. Although it was developed by MSI, this software can be used on all graphics cards, regardless of who made them.

This means graphics cards from the AIB partners of AMD, NVIDIA, and Intel can use this tool, which includes brands such as EVGA, Gigabyte, MSI, and more.

What Is MSI Afterburner?

If you have previously heard of this piece of software, you likely have some idea of what it is and what it’s capable of. For such a powerful and useful tool, it’s important to know the full extent of its capabilities so you can use them to their fullest.

As previously mentioned, MSI Afterburner is a great tool for monitoring and benchmarking. However, it truly shines in its overclocking and underclocking capabilities.

The great thing about MSI Afterburner is that it allows you to slowly and carefully adjust not only the GPU’s core clock but also to tinker with the memory clock, fan speed, power limit, and core voltage. These features make it a great tool but the reason we point to it as the best is in its simplicity and ease of use.

As well as being able to modify and experiment with the key settings of your GPU, you can also monitor how these changes affect it in real-time. MSI Afterburner comes with a really neat and, more importantly, resource-efficient overlay display, which can help you quickly assess how you have affected the frame rate in video games.

Another cool feature it can boast about is the ability to create different profiles for your settings. For example, you can have a separate overclocked profile to fulfill your gaming needs.

Should You Use MSI Afterburner?

After reading all of this and hopefully being fully aware of what MSI Afterburner is and what it can do, you might be wondering if its features are necessary for someone like you. As usual, the answer depends entirely on your needs.

If you’re a casual gamer with a budget or mid-tier card, or perhaps even the previous generation’s flagship, you might be surprised by just how much Afterburner can help you improve FPS. In this case, we definitely recommend giving it a try and finding out for yourself.

Despite what you might expect, even if you’re using the latest top-of-the-line graphics card, Afterburner can still be a really helpful tool. You can use it to ensure that your 4K cards are performing exactly how they’re supposed to, or you can use it for overclocking to add even more FPS.

A key feature that’s often overlooked is the ability to control fan speed. If your GPU is overheating, you should not take this issue lightly as it can interfere with your gaming experience or even cause damage. Afterburner’s fan speed control allows you to manually adjust at what temperature fans will intervene and at what speed. You can set it up yourself regardless, but it’s recommended to let the software take care of it.

As mentioned earlier, one of the main reasons why MSI Afterburner is such a great tool is that it’s easy to download and use.

MSI does change its website from time to time, and they might eventually change how to actually download the setup file. For now, the process is as follows:

Before we explore the possible uses of MSI Afterburner, let’s briefly look at MSI Kombustor. This is MSI’s stress test tool that is pretty decent and allows you to run stress tests at various presets (such as 1080p, 1440p, etc.). It’s also great for showing you the details of the test while you’re running it and can save a log file for you to review later. It’s a pretty reliable benchmarking tool overall.

How To Use MSI Afterburner

Now that you have everything set up, you probably want to dive headfirst into the magical world of overclocking. However, before you get there, there are a few things that you need to be wary of.

Caution and patience should be at the top of your list of priorities when undertaking any sort of external modification to any part of your PC, particularly sensitive ones such as the GPU and CPU. By this, we mean you should overclock your GPU (or CPU) in small, relatively even, increments rather than guessing at the optimal performance.

Let’s look at the various options that MSI Afterburner offers.

Right below the Afterburner logo at the top center, you will find three buttons: Kombustor, Help, and Information. The ‘Kombustor’ button will only be available if you have it installed. If you don’t, you can click it and you will be taken to its download page.

As mentioned earlier, Kombustor is a stress test tool that’s quite useful for immediate testing after overclocking. However, there are other, better, and more extensive stress test software including FurMark, 3DMark, or Unigine Heaven. We recommend using those.

As of writing, the ‘Help‘ button only leads you to the Afterburner page, but that’s likely the result of a recent redesign and will probably be changed back soon. The ‘Information‘ button will provide you with some rough specifications of your CPU and GPU, but nothing that isn’t better observed by using a different tool, such as CPU-Z.

The Most Important Part

Immediately below these three buttons are the general GPU sliders that you will use for overclocking or underclocking.

The first one is locked by default, for safety reasons, and that’s a commendable decision by MSI. It is labeled ‘Core Voltage‘ and is counted in millivolts (mV). It is used to add additional power to the GPU or to lower it.

Directly under core voltage control is a ‘Power Limit‘ slider, expressed in percentages. This will adjust the master GPU power limit, but only if your card supports it.

Up next is ‘Temperature Limit‘, which should be used in conjunction with core clock and memory clock increases. The temperature limit is almost necessary as the higher clock speed will produce higher heat output and you don’t want to have your GPU shut down on you.

The next slider is ‘Core Clock‘, which will allow you to change the GPU’s core clock. This means more processing power and better performance. However, as mentioned earlier, you need to have other settings aligned in order to get that performance boost with stability.

The ‘Fan Speed‘ slider directly below is used to control the master GPU fan speed. It’s set to ‘Auto’ by default which, in all honestly, is the best solution. You can tinker with this setting as much as you want but the easiest way to handle the fans is to let the software solution deal with it.

If you have a 3-fan deal on your graphics card, your GPU software might enable you to adjust all three fans individually, but that level of precision is largely unnecessary.

Following the most important section of the software, we have three more really important buttons: ‘Settings‘, ‘Reset‘ and ‘Apply‘.

As expected, the first one will open an additional window for the software settings, while the second one will reset all settings to their default values, and the last one lets you save your current settings.

The lower tab is useful for some minor settings and information, such as choosing whether or not the Afterburner will open on Windows startup, the name of your graphics card and its driver version, and lets you save different overclocking profiles.

While the first two are very straightforward, the last one is actually quite useful. There might be a particular game where you want to have your GPU running at its very best while you might be happy to leave it at its default clock otherwise.

The clocks on each side of this middle slider column help you visualize your GPU clock, memory clock, voltage, and temperature. They are useful for keeping track of your modifications. As it’s easier for most people to memorize information visually, this can be a great tool to help you keep an eye on things.

At the bottom of the window is the monitoring window, which suffers from Afterburner’s inflexibility as it is only able to display one graph at a time.

Finally, we have the OC Scanner, which is located in the top left-hand corner. OC Scanner is described by MSI as a one-click overclocking tool. Although there are a few more clicks required, the premise is relatively unchanged. It uses NVIDIA’s algorithm and will run a process to determine what settings are optimal for overclocking your GPU.

To allow the OC Scanner to work to the best of its ability, you must enable voltage control and voltage monitoring inside the settings window.

After you do that, you will want to push the ‘Core Voltage’, ‘Power Limit’, and ‘Temperature Limit’ all the way to the right. Although it may seem counterintuitive, each of these sliders is set up by a graphics card manufacturer to shoulder the load up to the GPU’s maximum capability, so you won’t fry the GPU by doing this.

Next, you can click the OC Scanner and run the ‘Scan’ option. This will test the GPU at four different voltage levels and, using the aforementioned algorithm, it will determine the highest stable frequency of your graphics card.

After running the scanner, it’s best if you run the ‘Test‘ option as well. That way, you will know how much confidence MSI generated for the OC profile that was created a moment ago. Generally, anything over 60% should be okay, but it would be best if you could get it to 90%.

Once this is done, you can apply the settings in Afterburner. We also recommend saving them in a separate profile so you can easily switch between the two modes.

Although overclocking isn’t the only use of MSI Afterburner, it’s certainly the best. Due to how easy it is to download and use, it shouldn’t come as a surprise that it’s often considered one of the most popular and useful overclocking tools. 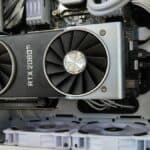 How To Mount Your GPU Vertically
Related Topics Tags