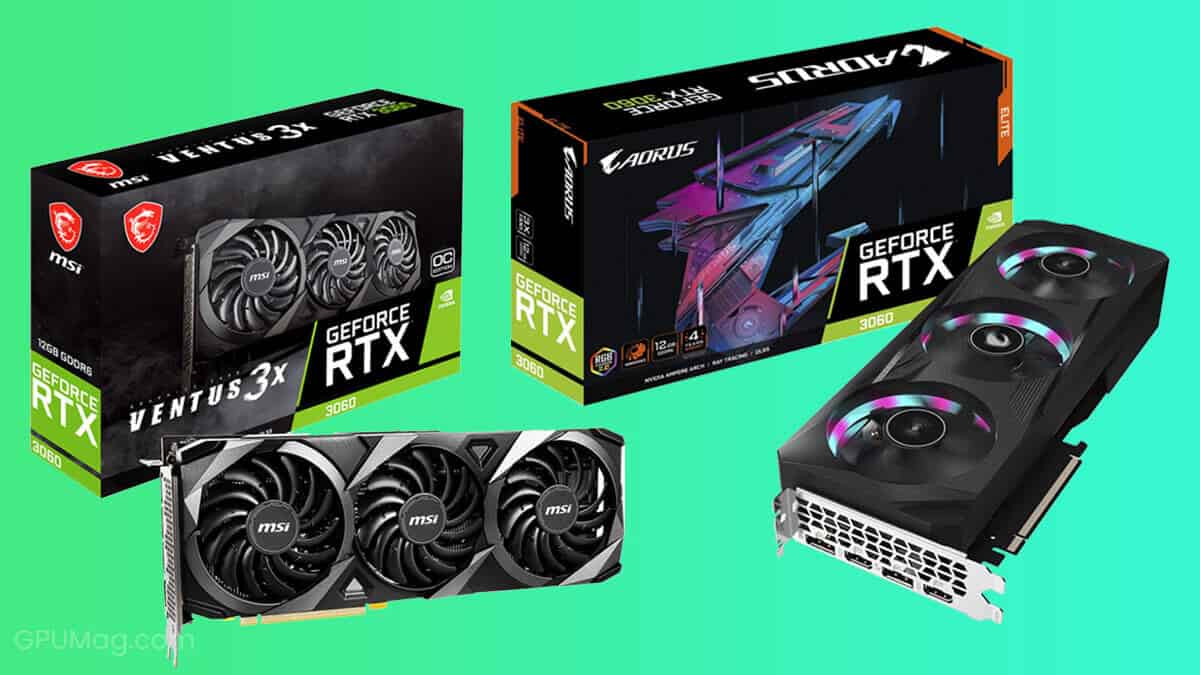 The high-end GPU offerings from NVIDIA and AMD are both excellent options, but if you are reading this, you are probably more interested in what the mid-range market offers. Keep in mind that the RTX 3070 is priced at $500 while its competitor, the RX 6700XT, is priced at $475.

With an MSRP of $329 and performance close to the 1080Ti or 2070 Super, it is definitely among the contenders for the best price per performance.

Remember that the GTX 1060 was (and still is) one of the dominant GPUs on the Steam Hardware Survey for the past five years.

We already know that Nvidia’s MSRP for the RTX 3060 is $329. However, AIB partners have not released any information regarding the MSRP of their aftermarket cards.

So, expect prices to go anywhere between $30 and up to $100 more than the Founders Edition. 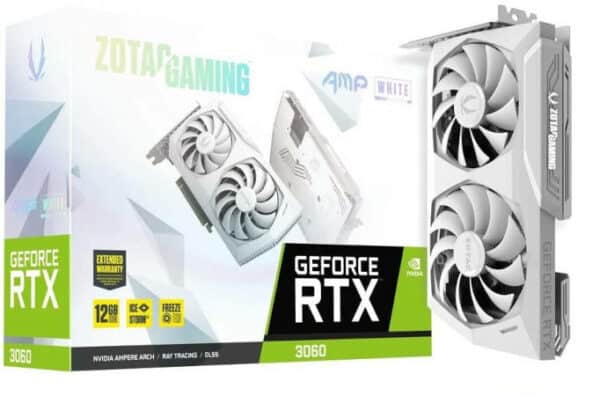 This one is a bit special because we rarely see white GPUs on the market. When we do, they are scarce, so finding accurate information for them can be difficult. Fortunately, there’s tons of available information (given the situation) regarding Zotac’s GeForce RTX 3060 AMP White Edition.

Zotac might not be as popular as some other brands on the market, but it is still a reliable manufacturer that provides GPUs with adequate cooling. With this RTX 3060, we can confidently say they have delivered another high-quality product to the market.

At the front, we can clearly see that the RTX 3060 AMP White Edition features a dual-fan design with an all-white plastic shroud. The overall design is quite clean, and Zotac has picked the perfect white color for those that want to build a white-themed rig. This is far more inviting than all the generic black/grey GPUs on the market.

White dominates the card, including the fans and the plastic shroud on the front, side, and back. On the side, we can see “ZOTAC GAMING” branding, which has RGB lighting, and “GEFORCE RTX” right next to it.

On the back, there’s a backplate covering the PCB. It is plastic, unfortunately, so we don’t expect it to help with thermals.

During heavy gaming loads, the core’s frequency pushes up to 2000 MHz and then stabilizes back at around 1925 MHz.

In terms of overclocking, you won’t be able to get much out of this card. Based on user reviews, this GPU’s core clocks can be overclocked to about 2000 MHz. This is definitely better than the clocks out of the box, but nothing to write home about.

The RTX 3060 AMP White Edition seems like a solid GPU based on the pricing, design, and performance. However, to support the points above, we also need to see a favorable thermal performance.

During extended loads of gaming, the GPU peaks at just 64°C, which is not bad at all. The clocks also stay consistent throughout this entire test. What’s even more impressive is that the fans don’t ramp up to more than 1700 RPM, keeping the noise at just 32 dBA. 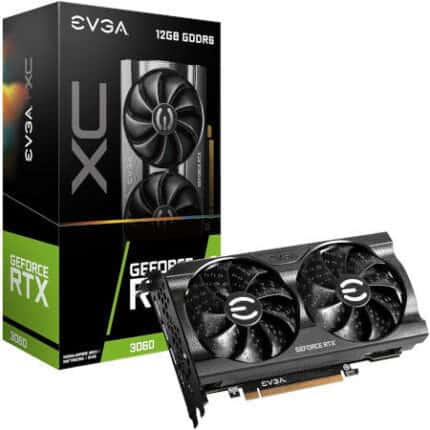 EVGA has been partnered with NVIDIA for GPU manufacturing for quite some time now. With every new GPU release, EVGA has delivered a formidable competitor to MSI’s, Gigabyte’s, and ASUS’s products.

The same can be said for the RTX 3060 XC. It may not be the best, but for a mid-range dual-fan GPU, it’s a solid choice. Should you go for this one? Let’s check out its performance and other attributes.

Design-wise, it is nothing we haven’t seen before. It has the exact same design as the RTX 3060 Ti XC. Nothing particularly interesting, but that isn’t always a bad thing.

On the front, we see the two twin fans with several small bumps that allegedly improve air circulation. The front has minimal branding, so the design is pretty clean. Moving to the side, we see a bit of branding for GeForce, RTX, EVGA, and sadly no RGB.

On the back, we see a metal backplate with thermal pads on the bottom, which should improve the overall thermals of the GPU. Additionally, the plate itself has dozens of small honeycomb-like holes. Visually, it looks pretty good, but it could also improve cooling.

Official specs claim a boost clock of 1882 MHz, while real-life benchmarks show the clock frequency reaching 1970 MHz and then averaging back at around 1910 Mhz.

Fortunately, there is room to push the frequency further. Overclocking can raise the core clocks to 2120 MHz. Not bad, and certainly better than Zotac’s card.

When it comes to thermal performance, it’s a bit disappointing. The twin fans ramp up to 2150 RPM during gaming sessions which can get a bit loud, reaching 35 dBA. You would hope that such an aggressive fan curve would reduce the temperatures, but they average around 70°C.

Of course, you can always adjust the fan curve to better suit your expectations, but you could do that with any card. We care about the out-of-the-box experience. 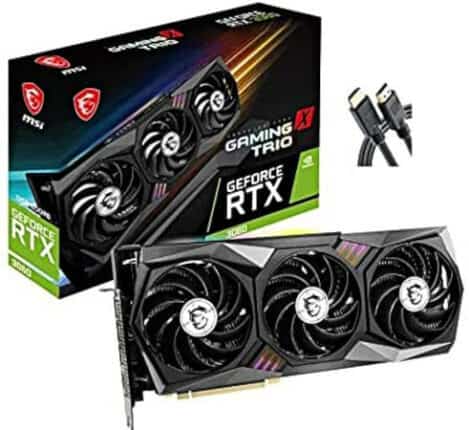 Let’s see exactly what this GPU can deliver.

If you have been keeping up with the rest of the GPUs in MSI’s NVIDIA and AMD lineups, you will notice that the design for this 3060 is the exact same.

There is a triple-fan setup at the front, with a few slits for RGB, and a black plastic shroud with a few metallic-like finishes. The Gaming X Trio is considerably longer/larger than some of the dual-fan 3060s. It is 323mm long. Keep that in mind when shopping for a PC build.

On the side of the card is where you would see most of your RGB. There is a diffused LED strip along the edge of the GPU and an MSI RGB logo right under it.

At the back, we get a plastic backplate which MSI claims is mixed with graphene to improve thermals. We’re unsure how effective it is even if we consider the thermal pads at the bottom of the backplate.

Even though it is plastic, visually, the back of the card looks pretty good.

The product specifications page claims 1852 MHz for boost clocks. In reality, the card clocks up at least 50 MHz higher on average while it maxes out at around 1960 MHz.

Fortunately, this card can be pushed quite high with overclocking. Based on the experiences of several users, the RTX 3060 Gaming X Trio clocks at 2170 MHz which is pretty impressive. This is better than the EVGA and considerably faster than Zotac’s OC of the RTX 3060 AMP.

With this level of overclocking, you could see an in-game improvement of about 10%. However, with that improvement, you will also see an increase in power usage and temperature. Whether or not overclocking is worth it is up to you to decide.

Thanks to the three fans on the front, the thermal performance of this GPU is more than good. After a long session of gaming, the GPU temperature doesn’t rise above 62°C, while the fans spin at just 1250 RPM. In other words, it’s both quiet and cool.

This is likely why it has so much room for overclocking.

Just like the Gaming X Trio, the Gigabyte’s RTX 3060 Gaming OC is already a pretty popular design that can be found on most AMD or Nvidia graphics cards. It has consistently been pretty successful in terms of cooling, so we’re interested to see how it will handle the RTX 3060.

This is another card with a triple-fan setup surrounded by a shroud with neutral colors. It is mostly black with silver/grey accents. This is a simple but clean design. There is nothing particularly remarkable here.

If you care about RGB lighting, you will be pleased to hear that there is a small Gigabyte logo on the side that is enhanced by LED lights.

The backplate is completely metal. That is something we always commend as it helps with thermals.

There’s a cutout at the right end of the backplate, which should benefit thermal performance, but it also adds to the aesthetic vibe of the card. Most of the backplate is silver (or rather grey) and has Gigabyte branding in white font.

During heavy loads, the Gaming OC’s clocks spike up to 1950 MHz and stabilize at around 1900 MHz, about 70 MHz more than the official rating.

Fortunately, those three fans provide enough cooling to tinker with the frequency and get some solid gains. By maximizing the power slider in MSI Afterburner, 2100 MHz is achievable, and it can stay stable. Your mileage may vary.

Evidence shows that the Gaming OC cooler doesn’t allow the card to go above 61°C. That’s better than MSI’s variant and significantly cooler than EVGA’s XC.

Although the fans tend to spin up, in a case with adequate circulation, noise levels shouldn’t exceed 32-33 dBA.

With this list of the best RTX 3060 graphics cards, which one is the best overall? Which one should you get?

The Best Overall award has to go to MSI’s RTX 3060 Gaming X Trio. It is quiet, cool, fast, and, judging by other Gaming X Trio releases, it shouldn’t be too expensive. It satisfies every need possible.

If you are trying to get the Best Value for your money, it’s probably best to go with Gigabyte’s RTX 3060 Gaming OC. It might not be entirely on the same level as the Gaming X Trio, but it’s similar in terms of cooling and performance.

Naturally, if you can get your hands on any of these cards, including EVGA’s XC and Zotac’s AMP White Edition, go right ahead. Each one of these variants is a choice you won’t regret. 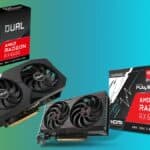