The RTX 3070 and RX 6700 XT are currently two of the most attractive offerings on the GPU market, largely due to their amazing price-to-performance ratio. Both cards are fairly priced while also running coolly and quietly. There really are no negatives to these cards.

However, as both are so good and perform similarly, how can you know which one you should get? The rivalry between AMD and NVIDIA is ongoing, whether in terms of raw performance or useful features.

We have compiled a wealth of research, including benchmarks, user reviews, and features to help you make an informed decision.

Before making this decision, you’ll need to decide which brand you should choose. Understanding where AMD and NVIDIA excel should simplify the decision-making process.

The current hot features are the cards’ ray-tracing capabilities and upscaling solutions.

DLSS or Deep Learning Super Sampling is a technology that takes lower resolution images and upscales them to a higher resolution. This technology provides users with more FPS while maintaining visual quality.

In most video games, DLSS offers several options, including Quality, Balanced, and Performance modes. The Quality mode provides visual quality similar to native resolution with a moderate increase in FPS. Balanced offers a balance between performance and image quality. Performance provides the user with the largest FPS boost, but the loss in image quality might not be worth it.

Overall, DLSS is an amazing piece of technology that provides RTX users with a “free” FPS boost.

However, even several years since its release, a relatively small number of games support this feature, so that is something to keep in mind.

AMD’s alternative to DLSS is called FSR or FidelityFX Super Resolution. This feature is also relatively new, so game support is pretty rare.

These aren’t exactly the most notable titles, but any support is welcome.

Here are some games expected to launch with FSR or that will receive an update soon: DOTA 2, Far Cry 6, Resident Evil VII: Village, Vampire the Masquerade – Bloodhunt, and several more.

AMD also announced several studios that it has partnered with to implement FSR. These include Electronic Arts, Valve, Gearbox, Rebellion, Frostbite, Unity, and Warner Bros.

The reason why so many studios are embracing this new upscaling solution is likely because the implementation process is incredibly simple. At the very least, it is easier than implementing DLSS.

However, there’s one more thing to consider: FSR is not exclusive to AMD GPUs. In fact, it’s possible to use FSR with an RTX 3070, while using DLSS on an RX 6700 XT is impossible.

Even so, AMD cards will probably see better performance gains from FSR due to driver optimizations.

On the other hand, ray tracing reduces a game’s framerate to provide far more immersive and realistic graphics. To use ray tracing, GPUs need hardware designed specifically for the purpose.

As of writing, NVIDIA’s hardware (RT Cores) is much more efficient and powerful than AMD’s hardware (Ray Accelerators.)

Still, we should keep in mind that AMD is relatively new to the ray-tracing sector, so any future driver and game optimizations should help balance things out.

The most important factor of any GPU is its performance. We’re all looking to make the best of our budget. As these two GPUs are priced very similarly, we can compare them directly.

We can see the same trend in Assassin’s Creed Valhalla, another AMD-optimized title, where it beats the RTX 3070 by 14% at 1440p.

However, that’s where the superiority of the RX 6700 XT ends. In several other titles, including Wolfenstein: Youngblood, Microsoft Flight Simulator 2020, Hitman 2, and Tom Clancy’s Rainbox Six Siege, the RTX 3070 is at least 10% faster.

After comparing several titles, on average, the RX 6700 XT is 3% slower than the RTX 3070 at 1080p. That performance gap increases slightly if you bump the resolution up to 1440p.

Such a small difference in FPS probably won’t be enough for you to make a decision.

Fortunately, there are a few more factors we can look at.

As performance isn’t the deciding factor between these two GPUs, we will take a closer look at their temperature, noise, and power consumption.

From looking at the TDP of the cards, we can see that they are identical, and real-life measurements appear to confirm this. While gaming, both cards average around 220W.

Power consumption results tell us that these two cards will perform very similarly as far as the thermal aspect. For a fair comparison, we need to look at the same brand and model; there’s no point in comparing the reference designs.

During extended heavy loads, both cards averaged at around 70°C, with the fans stabilizing at around 1800 RPM.

If you want a quiet PC, you can choose either of these GPUs, as they are practically identical in terms of noise and temperature.

Based on various professional and user reviews, the RTX 3000 and RX 6000 series GPUs are not exactly an overclocker’s dream. Even when increasing their power limits and clock speeds to the maximum, the gains in-game are no more than 10%.

These results are based on the reference design and Founders Edition. If you have an AIB card, your mileage may vary.

The deciding factor when buying PC hardware is almost always the price. Unfortunately, in this case, the pricing of these cards is quite similar, so it doesn’t do much to make your decision easier.

You should also consider the RTX 3070’s ability to utilize DLSS and its handling of ray-traced graphics.

We can’t discuss GPU pricing without considering the GPU market in 2020 and 2021. As of writing, the price of any graphics card is doubled, tripled, or even quadrupled. This means making a comparison with MSRP is not really viable.

Which One Should You Get?

Even after reading all this information, figuring out which GPU you should choose will be difficult. Both cards are almost identical in terms of performance, with the RTX 3070 taking just a slight lead.

You won’t go wrong with either of these two choices. However, considering current GPU prices, you should go for whatever you can find closest to MSRP. If you find an RX 6700 XT that is considerably cheaper than the RTX 3070, you should go down the AMD path and vice versa. 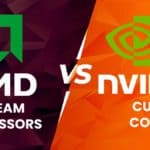