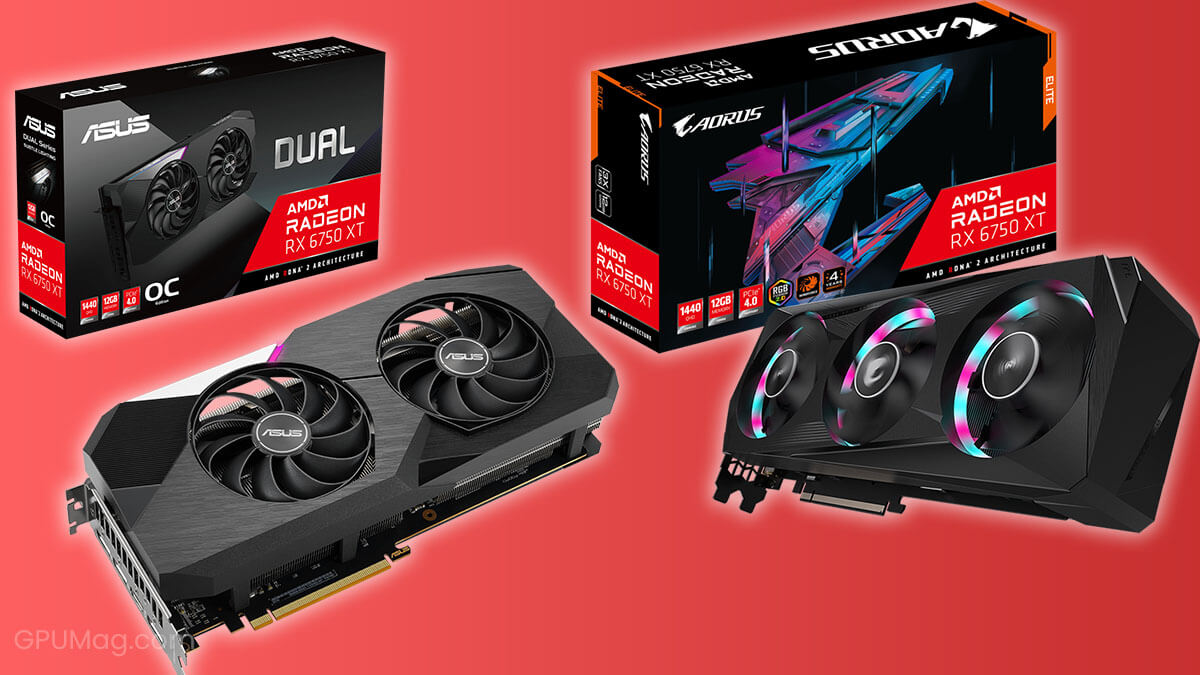 The RX 6700 XT got mixed reviews at its release because its price matched the RTX 3070 while lacking several features like proper upscaling (at the time) and raytracing performance.

But in this buying guide, we’ll be talking about the refreshed version, the RX 6750 XT, which supports upscaling (FSR 2.0), and see how it fares in today’s GPU market. 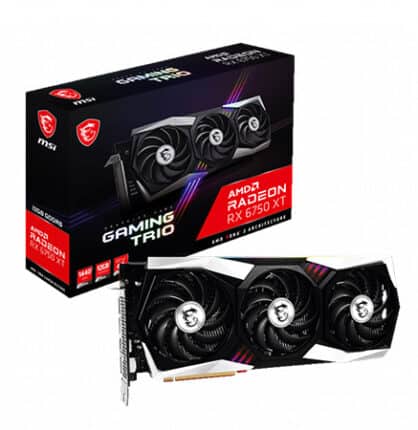 Over these last couple of years, the Gaming X Trio variants have dominated the market. MSI hit the mark with a competitive price, reliable cooling, and good overclocking capabilities. But have they done it again with this Radeon RX 6750 XT Gaming X Trio?

Design-wise, the Gaming X Trio remains identical to the rest of the RDNA 2 and RTX 3000 lineup that got this variant.

But that’s not a bad thing considering that MSI’s Gaming X Trio has worked well on all of these cards, including the RX 6800 XT.

It’s a triple-fan setup covered up by a black/silver shroud. This same design choice follows the rest of the card, including the metal backplate. There’s plenty of RGB on the front and side, so you don’t have to worry about that.

The only thing you should be wary of is clearance, as this GPU is 327mm long.

At stock, MSI advertises this Gaming X Trio to boost up to 2600 MHz, but it goes well beyond that. In-game, we can see this card often reaching up to 2750 MHz.

There is also a bit more room to squeeze even higher frequency. So, if you push this card to the max, it’s possible to reach around 2840 MHz.

The thermals are fantastic (66 degrees Celsius), considering the impressive noise levels. Fans speed up to just 1230 RPM, which generates only 28 dBA.

In other words, even if you decide to overclock this GPU, it will probably remain pretty quiet.

ASUS’ STRIX OC models are one of the most popular and premium AIB coolers on the market. The qualities remain throughout all GPUs, but so does the price.

It seems like getting a price for an AIB GPU is getting rarer and rarer. Fortunately, ASUS does provide an MSRP even though it is a bit high. This STRIX card is priced at $630, costing $80 over the RX 6760 XT’s $550 MSRP.

With ASUS’ premium price, you can expect higher material quality. The STRIX is pretty big with three fans and 322mm in length. It’s also 141mm in width.

The whole industrial/metallic design of the STRIX works with any computer, and it has ample RGB. It’s a design anyone can fall in love with.

The factory overclock of the ASUS Radeon RX 6750 XT STRIX OC is 2694 MHz, and in-game clock speeds seem to stay near that number.

But, if you want to get more out of your STRIX card, there’s plenty of overclocking room. Various reviewers have managed to push the card over 2850 MHz. Likewise, Techpowerup has managed to overclock the card to 2873 MHz.

Even though this is a pretty big card, its cooling does not impress that much. With the Quiet BIOS, the card gets up to 60 degrees Celsius, lower than the MSI variant, but noise levels reach up to 35 dBA.

With the default BIOS, temperatures drop to 57 degrees Celsius, and noise bumps up to 38 dBA. 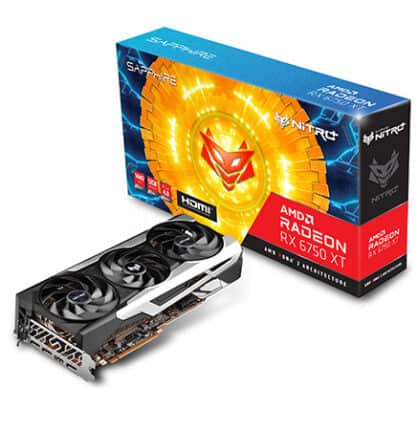 Let’s check it out!

Again, no pricing for this card was officially released, so we estimate that Sapphire’s card will probably go around $600, similar to the MSI Gaming X Trio.

The look of this Sapphire card is a definite hit. Pretty simple but still a great design. It’s a 310mm triple-fan GPU, with a black shroud on the front (surrounding the fans) and a silver side and backplate.

There’s RGB on the side and on the back too.

Sapphire declares a boost clock of 2623 MHz, and we see that same clock speed when running games.

So, factory specs don’t seem too attractive. However, overclocking is where this graphics card excels. This NITRO+ RX 6750 XT can be overclocked up to 2950 MHz, bringing up to 10% better performance in-game.

That’s a better OC than the STRIX or Gaming X Trio models.

This Sapphire card also performs in thermals. While gaming, temperature peaks at around 66 degrees Celsius, and noise levels around the 32 dBA mark.

We imagine there’s plenty of room for more cooling if you decide to go for a 2900+MHz overclock. 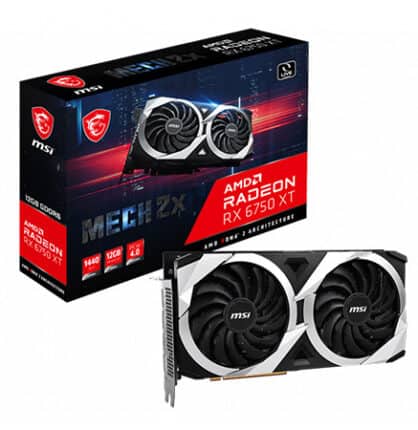 Whenever we’re looking for the best AIB models, MSI is almost always on the list, but only because of its higher-end model, the Gaming X Trio. But, this time around, we’re giving a shout-out to the MSI RX 6750 XT MECH.

Let’s see how this smaller cooler fares against the giants.

This is a smaller, two-fan card, considerably shorter (249mm) than the other models on this list. So, if anyone is looking for a card that will fit in small form factor cases, this is a good choice.

The design is nothing to write home about, but it’s okay—a primarily black shroud with a bit of gray surrounding the fans.

Unfortunately, it has a plastic backplate which is usually a no-no for us.

In-game clock speeds and the card’s specifications match 2600 MHz. But we can fix that with a bit of an overclock, right?

Well, no. The card’s power limit cannot be adjusted, leading to a disappointing overclock.

The MSI 6750 XT MECH isn’t too bad at thermals, with a considerably smaller radiator and only two fans. During gaming, the card sits around 70 degrees Celsius. Not bad at all.

Which RX 6750 XT Graphics Card Should You Buy?

With four RX 6750 XT AIBs looming over your head, which one should you get for your setup?

Well, if you’re looking to get the Best Value GPU, we suggest the MSI Radeon RX 6750 XT Gaming X Trio.

Alternatively, the Sapphire is also a solid choice because of its ridiculous overclocking headroom. 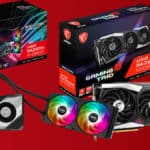