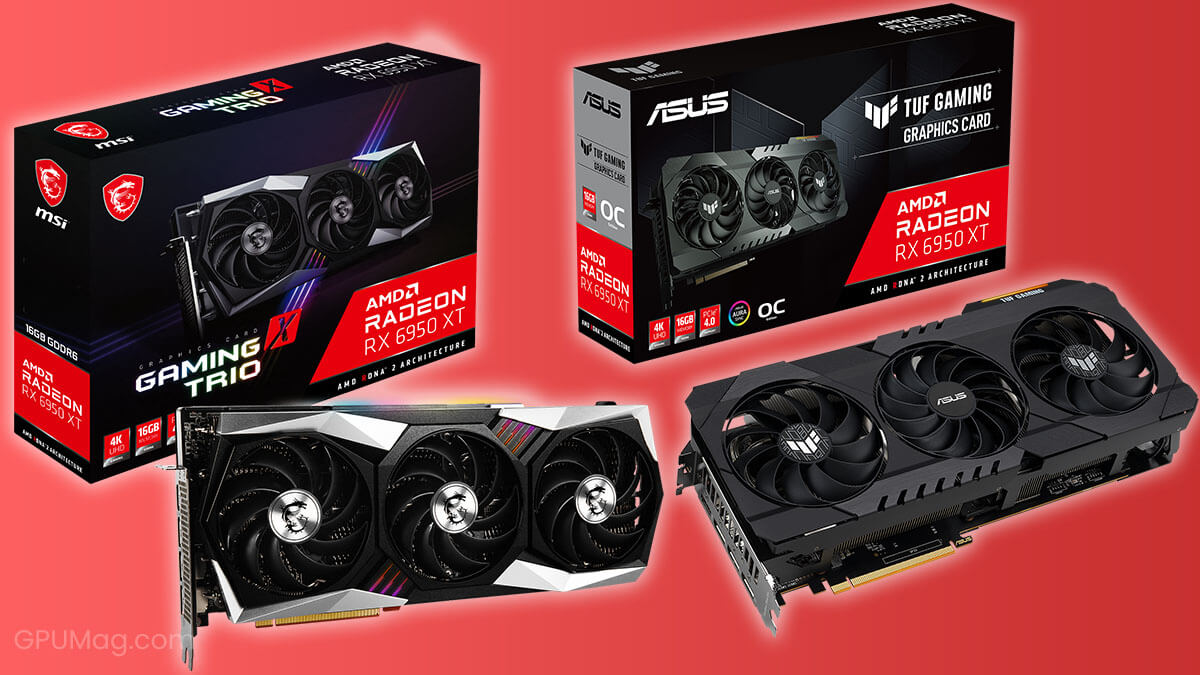 Overall, this new card fares well against the green team while being priced accordingly. So, if you are looking to grab this flagship card, you’ll probably want to know which AIB model is the best one.

So, let’s look at some of the options and figure that out! 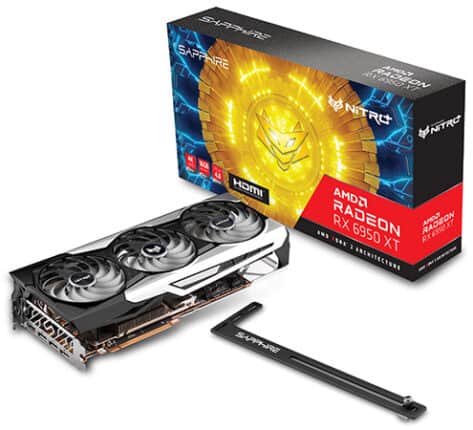 This time around, the RX 6950 XT gets a NITRO+ Pure model, making it a bit more premium than the regular NITRO+.

Sapphire decided to make an extremely thick heatsink and shroud for this powerhouse of a GPU. It’s around 13mm thicker than the regular Nitro+ version.

But, it’s also entirely different from the original Nitro+ design. The white color dominates the GPU with only a couple of silver, grey, and black accents. The black fans and white shroud combo pair nicely.

With such a premium card, you’ll obviously get enough RGB located on the side and back of the card. There’s also a pretty thick metal backplate.

Overall, this is a fantastic design with a high-quality feel that should fit perfectly into any kind of PC build. But it would definitely work better in a white-themed PC.

Sapphire gives users two factory boost clock options. Either 2368 MHz with the default BIOS or 2435 MHz with the OC BIOS. This can be done through the BIOS switch on the card.

With the RX 6950 XT set to the OC BIOS, this GPU’s clocks jump up to 2630 MHz and average around 2570 MHz. Again, this is substantially faster than the official specifications.

But, with an exceptional card like this, we can’t ignore the overclocking potential.

Pushing the power limits on Sapphire’s RX 6950 XT NITRO+ Pure, GPU clocks can be increased to 2800 MHz. That’s an 18% difference in clock frequency (over stock specifications) which can deliver up to 10% performance in-game.

Cooling is not easy for a card that draws up to 400W from the socket. But, Sapphire has put quite a hefty heatsink on the RX 6950 XT, so temperatures peak at 76°C while noise levels sit around 29 dBA.

So, maybe a bit hot, but still quiet. Note that the OC BIOS could lead to a hotter and louder experience. 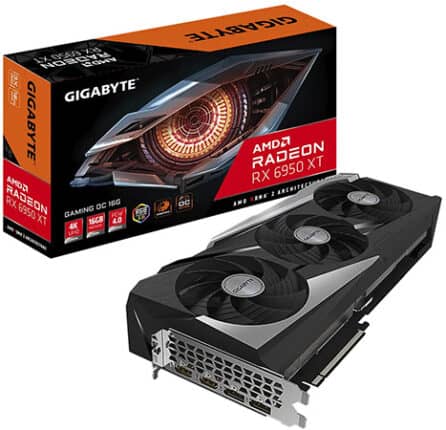 While this is AMD’s flagship GPU, it isn’t Gigabyte’s flagship AIB. But, the Gaming OC cooling design usually doesn’t disappoint, so let’s check out how this Gigabyte Radeon RX 6950 XT Gaming OC.

Even though this isn’t Gigabyte’s most premium cooler design, the price increase over AMD’s MSRP is confusingly large. Gigabyte priced this card at $1,300, making it more expensive than Sapphire’s Nitro+ Pure design.

The Gaming OC design is already well known and hasn’t changed for this flagship GPU. It’s a primarily black GPU with a bit of gray/silver here and there.

Although, the backplate has seen some changes to allow for better heat dissipation and airflow.

The average clock speed of this GPU between various games is around 2500 MHz. We always like to see cards performing better than what is advertised.

The overclocking potential is slightly worse than the Sapphire AIB, with GPU clocks reaching 2730 MHz.

While not as tall, Gigabyte’s RX 6950 XT Gaming OC is longer and wider than the Sapphire counterpart, so there’s definitely room for proper cooling.

On its default BIOS, temperature peaks at 68°C with noise levels sitting around 36 dBA. Not bad, but it could use a better fan curve to be quieter. 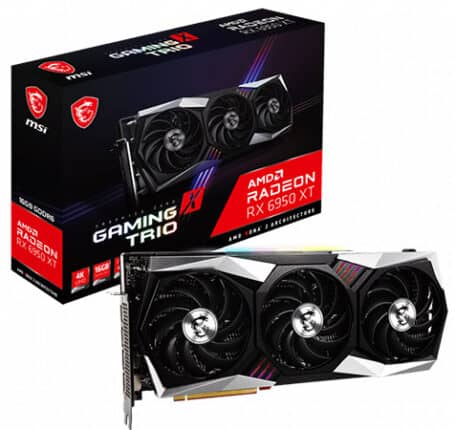 Let’s check it out!

MSI’s Gaming X Trio has been a hit every time and never a miss. But this card is a bit more power-hungry, so is the Gaming X Trio cooling setup enough for AMD’s Radeon RX 6950 XT?

Another considerable price premium over AMD’s MSRP at $1,250, but it is at least priced cheaper than the Gaming OC.

MSI’s Gaming X Trio design always gets praise from us, and since there isn’t any difference compared to other Gaming X Trio GPUs, there’s no reason not to do so again.

This GPU weighs 1605 grams and feels like a high-quality product, even though the black shroud surrounding the heatsink is plastic. In addition, the backplate is made out of metal which further improves the feel of this card.

If that’s not enough, MSI’s card is open to some solid overclocking, with the core clock reaching 2790 MHz.

MSI’s Radeon RX 6950 XT Gaming X Trio might be the GPU that hits 95 degrees (Celsius) on the hotspot and 77°C on the GPU sensor, but it’s still pretty quiet at 31 dBA.

If you don’t want a space heater in your PC, you could either create a more aggressive fan curve or maybe try undervolting or underclocking. 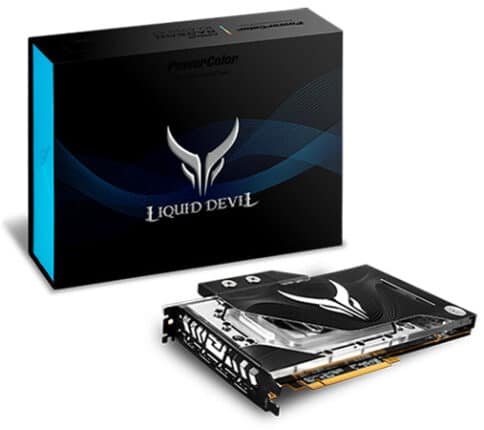 A bit of an unconventional card since this wouldn’t fit in just any system. The Powercolor RX 6950 XT Liquid Devil is a GPU for a water cooling loop only. It does not come with its own radiator, so you can skip this one if you don’t have such a cooling loop in your system.

Unfortunately, there is no official price tag for Powercolor’s liquid-cooled beast. Because of this, ridiculously high prices are feasible, especially since this is such a premium card.

As we already mentioned, this is an unconventional card, so it is unique design-wise.

Since it is water-cooled, there are no fans on it. Instead of fans, there’s a water block paired with the PCB. The entire GPU is mostly black, with a giant Liquid Devil logo on it, but there are also some transparent segments from which you can see the water flow.

The Liquid Devil comes with a switch for two BIOS options. The OC (default) BIOS comes with a 2513 MHz GPU clock boost. On the other hand, the Unleash BIOS brings a 2565 MHz boost.

But, let’s be honest. If you’re getting this type of card, you will definitely want to overclock it. So, you can quickly crank up the power limit and send the RX 6950 XT up to 2800 MHz. This should be stable, and with enough tweaking, the Liquid Devil will most certainly reach higher boost clocks (up to 2850 MHz).

Not only is this an overclocking beast, but thanks to PowerColor’s quality water block, this GPU is also exceptionally cool. At stock, the GPU peaks at just under 50 degrees Celsius.

And, of course, you won’t have to worry about noise levels since this card does not have any fans. Although, the amount of noise your system will produce is relative. It depends on the airflow in the case, fans, and other factors.

Which AMD RX 6950 XT Graphics Card Should You Buy?

With four RX 6950 XT AIBs to pick from, which one is the best you can get?

Well, if you’re looking to build the most powerful system money can buy, Powercolor’s RX 6950 XT Liquid Devil is the definite Premium Pick.

But, for those who want to invest their money in other PC parts, consider MSI’s Radeon RX 6950 XT Gaming X Trio as the Best Value option.

Of course, the Sapphire Nitro+ PURE is another excellent GPU. 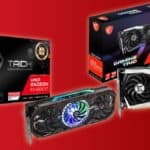