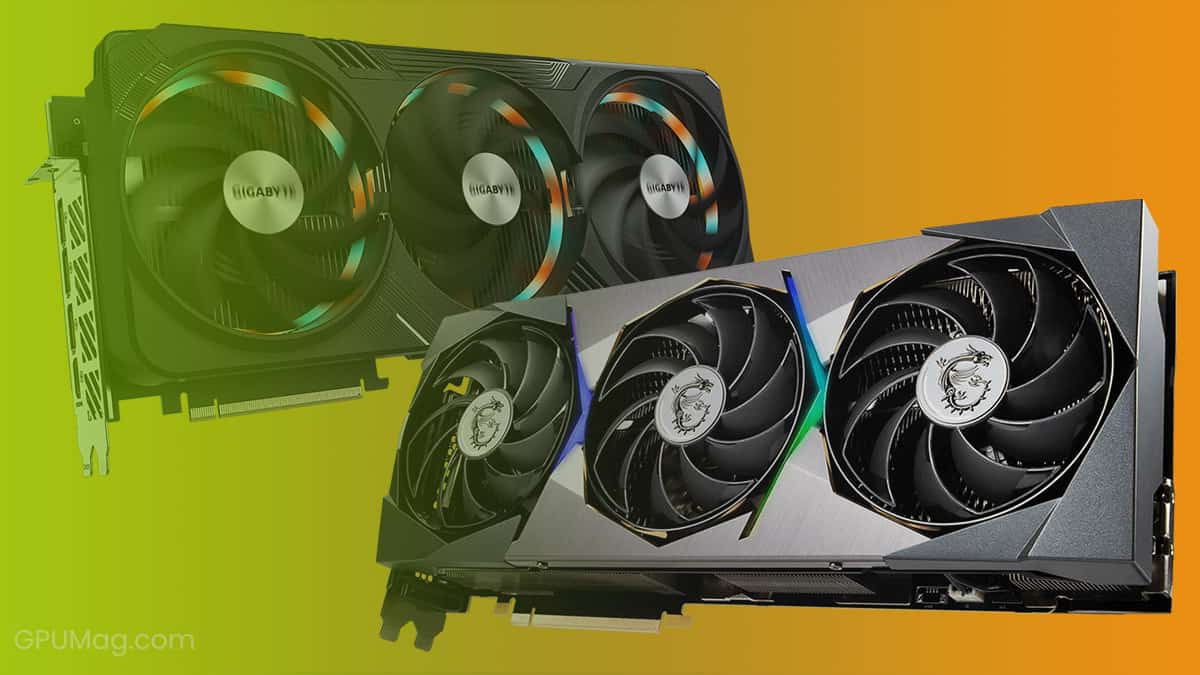 NVIDIA’s RTX 4000 series of GPUs didn’t get the warmest welcome from the tech world primarily because of bad pricing. The 12GB RTX 4080 especially got some flak for its $1200 price tag.

However, the RTX 4090 story is slightly different, even though it has a pretty lousy price-per-performance because of its $1600 MSRP. Nevertheless, it is still undoubtedly the fastest gaming graphics card in the world.

AMD’s RDNA 3 RX 7900 XTX may offer much better value, but the RTX 4090 is the right option for those who want the best of the best.

It’s also a bit cheaper, which takes us to our next point.

The Suprim X’s MSRP was $1,750, $150 more than the Founders Edition MSRP, so it’s not a huge price premium considering how expensive this product is.

Unfortunately, even at launch, the Suprim X was often well above $2000 at retailers like Amazon and Newegg.

The RTX 4090 FE is a massive card because of its high-power usage, but the Suprim X is even bigger. In fact, it’s almost the same length as the RTX 3090 Ti, but it is 7mm thicker and a bit wider. Maybe that is why it weighs 2440g!

But even though it is comically large, the Suprim X cooling setup has a premium look and feel. It’s nothing new and innovative, but you can’t go wrong with a triple fan cooling, a minimalistic metal grey shroud.

It also has a metal backplate. Overall, the design gets two thumbs up from us!

Obviously, looks are not the number one factor when buying a $1600 GPU, so let’s look at some performance.

That higher boost clock won’t get you a considerable increase in performance, but there is some overclocking headroom.

Based on various reviews, the MSI RTX 4090 Suprim X’s GPU clock can overclock to 3000 MHz and can be pushed memory clocks to 1500 MHz. Nothing too crazy, as the RTX 4090 FE can also reach these numbers. Although the Suprim X will run at a lower temperature.

The card’s board power limit is 530W, while the Founders Editions’ limit is set to 600W.

For a card that draws 400W when gaming and up to 500W when used at its maximum, the MSI RTX 4090 Suprim X stays pretty cool. During gaming, the average temperature stays around 70 degrees Celsius while the fans spin up to 1200 RPM. That amounts to 28 dBA noise levels.

Keep in mind that the secondary “Gaming BIOS” can drop temperatures by 5 degrees Celsius or more but at the cost of some noise. 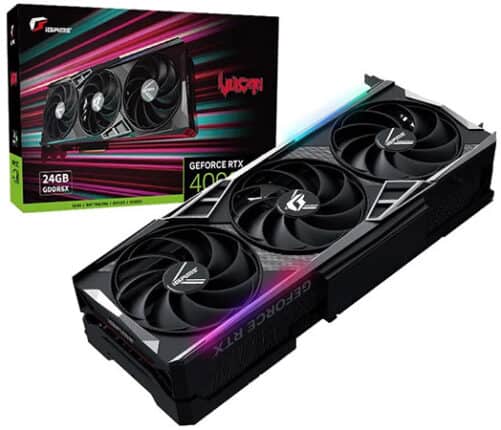 Colorful AIB cards are not in everyone’s top three choices. Usually, people opt for EVGA, Gigabyte, MSI, and ASUS, but with EVGA out of the equation and Colorful stepping up, the RTX 4090 Vulcan OC-V might be one of the best RTX 4090s out there.

A 450W TDP graphics card won’t have less than three fans on it, so naturally, Colorful’s GeForce RTX 4090 Vulcan OC-V has a triple-fan setup.

Weighing slightly more than the Suprim X, it is also a bit longer and broader. So, before you grab one of these, ensure your PC case has at least 350-360mm clearance for GPUs.

If you’re worried about GPU sag because of the weight and size of Colorful’s Vulcan OC-V, you’ll be glad to know there is a GPU bracket in the box.

Often, Colorful’s design styles can be a bit over the top, but this time, it is quite subtle, which anyone can appreciate. In addition, the entire GPU shroud is primarily grey and black with minimal branding or RGB lighting, so it can look good with pretty much any build.

The card’s specifications advertise a 2625 MHz, which realistically is above 2700 MHz, with peaks up to 2750 MHz. So, slightly faster than the Founders Edition out of the box but about 100 MHz slower than MSI’s Suprim X. Although that difference won’t significantly impact performance.

Overclocking can get this card’s clock speed to 3000 MHz, and memory clocks up to 1500 MHz. We’ll see a maximum 3000 MHz overclock trend with the rest of the cards. Unfortunately, it doesn’t seem like the RTX 4090 chip can handle any more than that unless someone mods the GPU’s BIOS.

This card’s board power limit is 480W.

If performance is not a huge factor when choosing between different RTX 4090s, temperatures and noise levels definitely are.

This is a very bulky card, so average temperatures stay around the 61 degrees Celsius mark while noise levels are around 36 dBA. 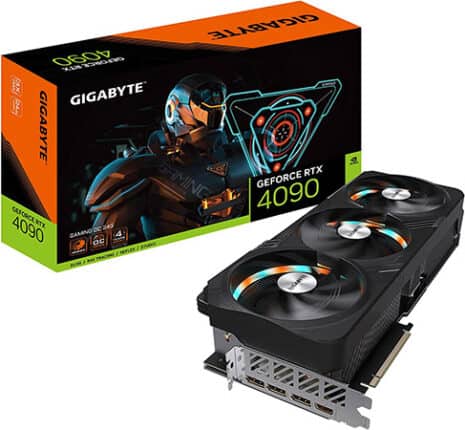 Gigabyte’s Gaming OC brand is the go-to option for an AIB variant of a GPU without a hefty price premium and reliable cooling.

The Gigabyte delivers that again with the RTX 4090 Gaming OC.

MSRP of the Gigabyte RTX 4090 Gaming OC is $1700, so $100 over the Founders Edition, but just $50 cheaper than the rest of the options. So spending the extra $50 might be worth it if you want a more premium look and feel.

The design of the Gaming OC is completely reworked for the RTX 4000 series. The entire shroud is predominantly black with three fans on the front, and it is a lot more toned down than previous generations.

Like the previous two GPUs mentioned in this buying guide, Gigabyte’s card is also overclockable up to 3000 MHz, while memory clocks can be brought up to 1600 MHz, although your mileage may vary.

Total board power is limited to 600W.

Even though this RTX 4090 might get labeled as one of the “cheaper” options, its thermals are actually quite impressive.

With its default (performance) BIOS, the average GPU temp is around 60 degrees Celsius, but noise levels get up to 37 dBA, which might be a bit loud.

However, users can easily switch to the Quiet BIOS (with the physical switch on the GPU), which brings the average temperature to 64°C and drops noise levels down to 32 dBA. With that kind of temperature headroom, we suggest lowering the fan speed even further for a quieter experience. 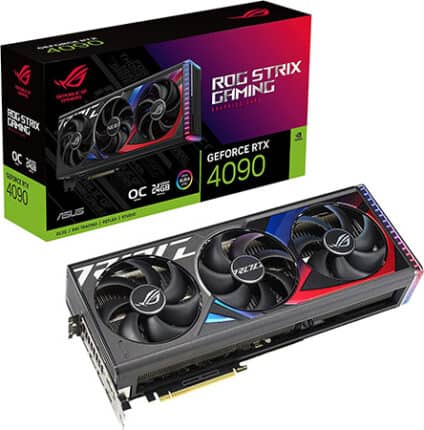 ASUS’ STRIX holds a reputation for offering some of the best cooling and overclocking performance over the past several decades of AMD and NVIDIA GPUs. STRIX branding is also famous for its huge price premium over MSRP. However, the ASUS RTX 4090 STRIX OC takes a bit of a different approach.

So, even if this RTX 4090 offers the best cooling and overclocking, $400 extra is not really worth it.

You can expect only high-quality materials from a $2000 card, which you will get with this ASUS STRIX card. With a metal shroud on the front and a metal backplate, the card weighs in at 2504 grams.

The design of the shroud is a bit of a hit-and-miss. Half of the black metal shroud is covered with a red-to-blue gradient. It’s executed properly, but these bold colors can be challenging to fit aesthetically into a build, especially if you plan a vertical mount.

The RTX 4090 STRIX OC brings the best performance out of the box, without a doubt. Even though its boost clocks are advertised as 2640 MHz, in-game, the clock speeds average above 2800 MHz and peak at 2880 MHz.

However, due to the RTX 4090’s limitations, even with all that cooling, the STRIX OC overclocks to 3000 MHZ even with a board limit power of 600W.

Thermal performance is where the RTX 4090 STRIX OC can shine. At stock settings, the average GPU temperature is about 62 degrees Celsius while noise levels average at the 32 dBA range.

The Quiet BIOS is available to make the GPU even quieter, which raises temperatures by a small amount and lowers noise levels to 29 dBA.

Which RTX 4090 Graphics Card Should You Get?

There are dozens of RTX 4090 variants out there, and out of all those, we managed to reduce that number to just 4 GPUs.

These RTX 4090 listed above are the best in terms of performance, cooling, design, and price. But which one of these four should you get? Here’s our summary:

The MSI RTX 4090 SUPRIM X gets our Best Overall award for its excellent performance and quietness at stock settings.

The Gigabyte RTX 4090 GAMING OC gets the Best Value awardsimply because of its lower price tag while delivering almost equal performance.

But the ASUS RTX 4090 STRIX OC and Colorful RTX 4090 Vulcan OC-V shouldn’t be ignored either. The STRIX OC has the most premium feel and looks out of the bunch. Likewise, Colorful’s Vulcan OC-VC’s temperatures are very surprising and with just a bit of fan speed tweaking, it can deliver a great experience.

Ultimately, whichever of these four you go with, you will get an excellent card for your system. 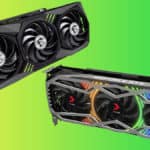