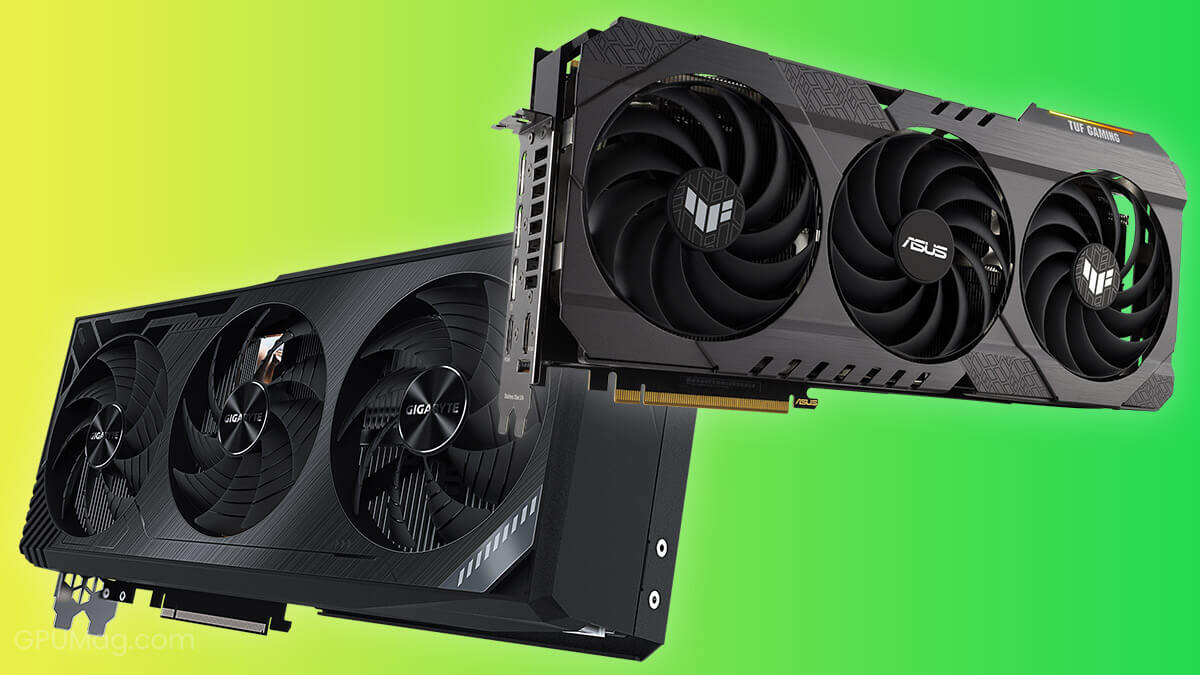 NVIDIA’s RTX 3090 has its downsides, like its $1,500 price tag, but it’s still one of the fastest consumer GPUs in the world paired with 24GB of VRAM, which is very useful for rendering, modeling, and editing.

NVIDIA being NVIDIA, they had to one-up their flagship and release the RTX 3090 Ti. Unfortunately, this one is even more expensive, priced at $2,000.

If you’re looking to put this $2,000 GPU in your system, you’ll want one that’s quiet, cool, and the most efficient.

So, let’s look at some of the best AIB variants. 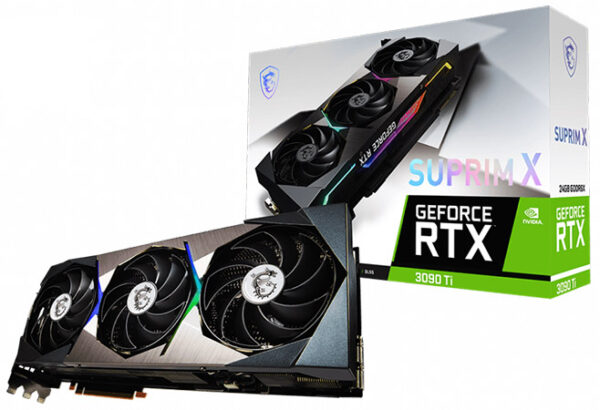 The MSRP of the RTX 3090 Ti is already pretty high at $2000, and naturally, MSI increases the price to $2200 for this model. Is the $200 price premium worth it, or should you go with the Founders Edition?

Design-wise we must admit that it is an excellent-looking card. The shroud surrounding the PCB is aluminum, adding to that high-quality feel and look. But that’s also why it weighs 2146 grams.

It has a large heatsink with three fans on top of it, making this a four-slot card.

There’s plenty of RGB to go around if that’s something you’re into.

From the factory, the MSI RTX 3090 Ti Suprim X should clock at 1965 MHz, but it actually boosts higher than that, around 2040 MHz. So is that good enough to fork out an extra $200? Well, let’s look at some overclocking.

Based on some reviews we’ve seen and multiple user experiences, the Suprim X can be pushed to 2140 MHz and memory clocks to 1500 MHz. So, realistically, it’s not a very impressive OC, but that’s mainly because the power limits are locked on this card.

If you’re a fan of overclocking, we suggest skipping this one.

Whatever kind of heatsink you put on an RTX 3090 Ti, it simply won’t be enough. With a power draw of 480W, only liquid cooling can tame this beast.

So, during gaming, the Suprim X jumps to 80 degrees Celsius, and the fans speed up to 1600 RPM, producing around 32 dBA.

If you want to drop the temperature to the lower 70s, use the Gaming BIOS, which has a much more aggressive fan curve. But keep in mind that fan noise will jump up to 40 dBA. 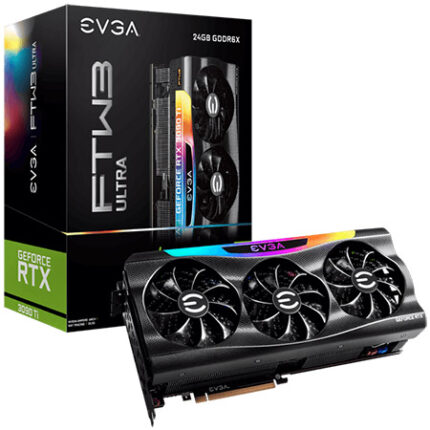 In this buying guide, we’ll focus primarily on the flagship AIBs since anything else won’t be enough to cool this 480W GPU. That’s why we went with EVGA’s RTX 3090 Ti FTW3 Ultra, their current flagship.

Although there were some teases about a Kingpin variant with liquid cooling, which should be the new flagship.

Pricing is identical to the Suprim X at $200, so it seems like the trend is to add a huge price premium to a flagship card such as the RTX 3090 Ti.

However, design-wise, we don’t have a lot of praise. While the carbon-fiber-like black shroud surrounding the fans looks OK, but the tacky transparent piece of plastic across the shroud for RGB and the weird wavy surface ruins the whole look and feel of the card. But, of course, looks can be subjective.

Although the back looks pretty slick, so if you’re not going for a vertical mount, it’s not that bad.

What’s unique about the RTX 3090 Ti FTW3 Ultra is the “eLeash.” The cable can be hooked on a computer chassis and the GPU to remove GPU sag. It’s a marvelous idea and a much cleaner solution than a support bracket.

Official EVGA specifications put this GPU at 1920 MHz, but in-game, the card quickly boosts up to 2050MHz+ and averages around that mark. Of course, this depends on which BIOS is selected.

And thanks to the unlocked power limit (around 7%), the FTW3 Ultra can be overclocked to around 2170Mhz. Only a slight difference with the Suprim X.

This card has three BIOS options: Performance, Normal, and OC. For the best thermals, use the default Performance BIOS, which keeps temperatures at 71°C, but noise levels will jump to 44 dBA.

For something quieter and slower, use the Normal BIOS to go down to 40 dBA. Temperature levels will also rise.

And finally, use the OC BIOS for the highest clock speeds, no fan-stop, noise levels up to 44 dBA, and temperature peak at 71°C. 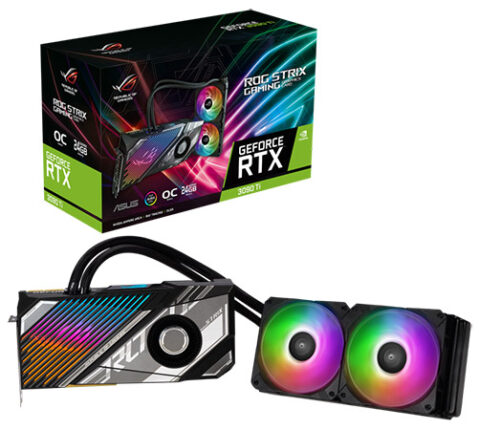 We already mentioned a few times that tackling the vast power draw of NVIDIA’s two-thousand-dollar GPU is not easy and that liquid cooling might be the only solution.

Well, ASUS went down that route and made the ASUS GeForce RTX 3090 Ti STRIX LC.

Since this is a liquid-cooled card and we’re talking about ASUS, we expected a price much higher than MSI or EVGA. But, weirdly enough, ASUS’ 3090 Ti STRIX LC is priced at $2200, exactly the same as the other contenders.

Even though this is a water-cooled graphics card, it’s still pretty wide, but it takes up only 2.6 slots and is shorter.

The shroud surrounding the one fan is made from plastic, while the back has quite a thick aluminum back plate. On the card’s side are two tubes that transfer liquid from the water block to the radiator. The 240mm radiator comes with two RGB 120 mm fans.

We expected an aggressive factory overclock on this RTX 3090 Ti since it is water cooled, but out of the box, it boosts to 2050 MHz. A minimal difference from the other two contenders in this guide.

However, the user can use that water cooling advantage and overclock this monster GPU to 2200MHz+. A nice boost over the stock OC.

Now comes the strongest point of any water-cooled GPU, and that’s the temperature. With the default BIOS, temperatures sit at 55°C, but noise levels reach 46-47 dBA.

If users find this unbearable, we recommend switching over to the Quiet BIOS to drop noise to 38 dBA with a slight increase in temperature to 59°C. 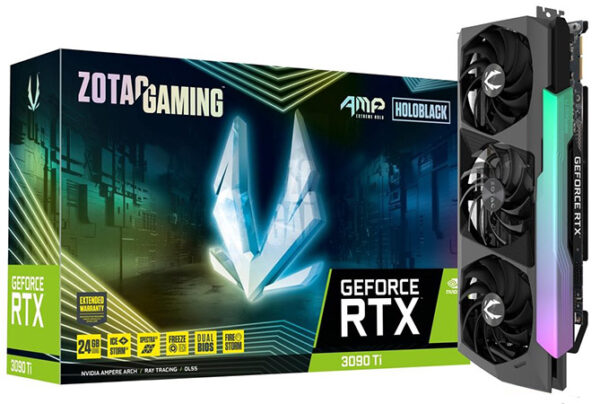 Zotac’s GeForce RTX 3090 Ti Amp Extreme Holo definitely has a name you’ll have trouble remembering. However, if you’re impressed by its performance, you’ll have something to remember it by.

Unexpectedly, this RTX 3090 Ti should sell at precisely the same price as the Founders Edition, according to Zotac. So, $2000 for an AIB? Not bad at all.

The design isn’t incredibly innovative, but it’s pretty simple, and we do like it. On its side, you can see a strip that resembles burnt titanium dedicated to RGB. It’s executed much better than EVGA’s big piece of RGB plastic.

The only downside here is that Zotac’s RTX 3090 Ti is 350mm long, making this the longest GPU in this guide. The worst part is that the extra length comes from the plastic shroud, which doesn’t add any extra functionality.

The RTX 3090 Ti Amp Extreme Holo has the lowest factory clock speeds at just 1890 MHz. Fortunately, the card boosts up to ~2030 MHz in-game.

Overclocking potential is also held back even though power limits can go up to +10%. So expect an OC around 2140 MHz or lower.

Still, not bad, considering it’s $200 cheaper than the alternatives.

And even though it is the cheapest GPU on this guide, it is the quietest one too. That’s right, with the Quiet BIOS selected, noise levels stay at 35 dBA with temperatures sitting around 76°C.

With the default BIOS, temperatures drop to 68°C, and noise levels rise up to 42 dBA. So, still quieter than some other options and pretty cool for a 480W GPU.

Which RTX 3090 Ti Graphics Card Should You Buy?

With four RTX 3090 Ti listed in this buying guide, which one of them should you get?

If you feel like $2000 is already enough money spent on a GPU, get Zotac’s GeForce RTX 3090 Ti Amp Extreme since it is the Best Value option.

This doesn’t make the MSI RTX 3090 Suprim X a lousy pick. If you find it to be superior design-wise, go for it. It’s a great GPU.

And, if you don’t find EVGA’s design as bad as we did, it is another excellent option. 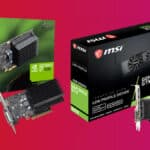