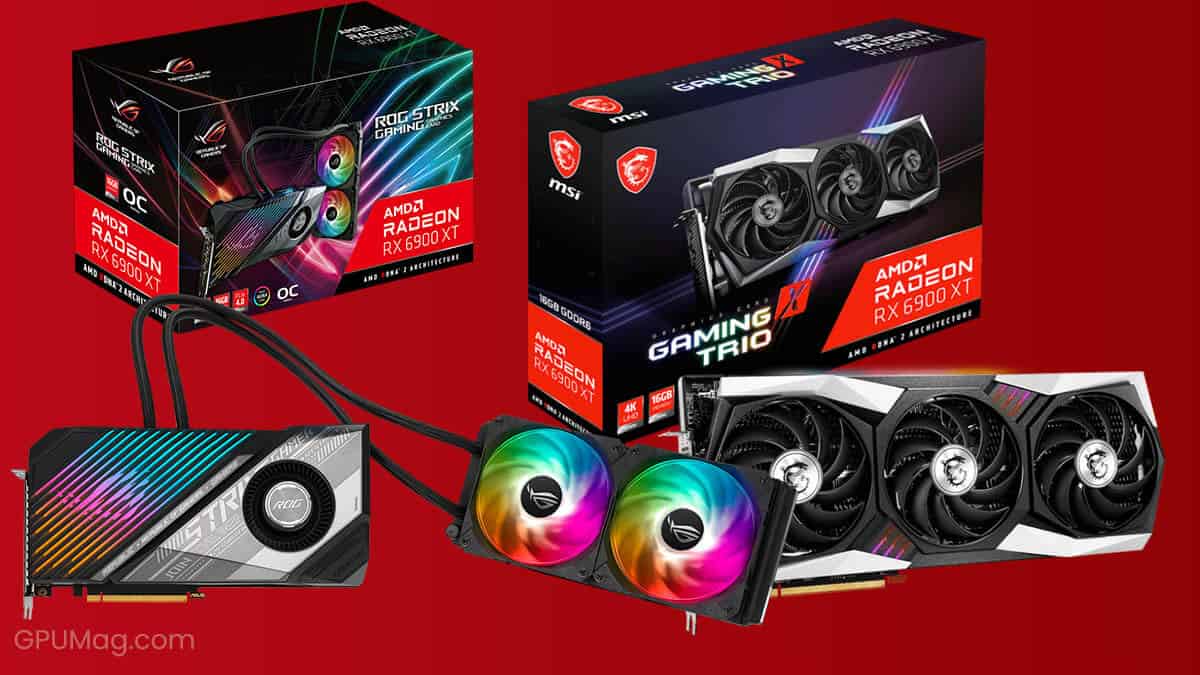 For the first time in over a decade, AMD has finally produced a contender to NVIDIA’s flagship consumer GPU.

Of course, AMD’s flagship isn’t perfect in every respect. It lacks ray tracing performance and doesn’t have a DLSS equivalent.

The RX 6900 XT is still a great GPU, and offers much better performance per dollar than the 3090.

If you are reading this guide, you’re probably already ready to buy an RX 6900 XT; you just have to pick the right AIB model.

To help you make that decision, we have extensively researched all the RX 6900 XT variants. 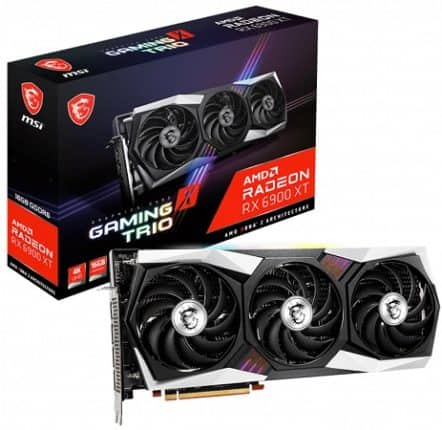 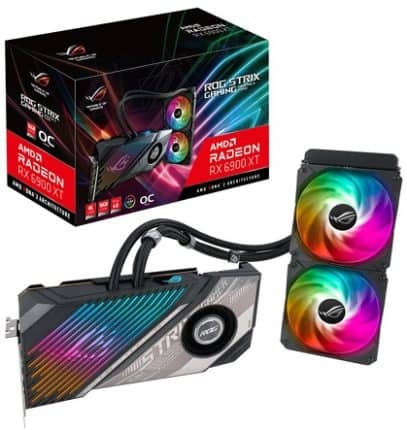 MSI’s Gaming X Trio has proved to be one of the better aftermarket designs for most GPUs. Many reviewers and users have stated that MSI’s cooling solution, Tri-Frozr, is solid for RTX 3090s, 3080s, 3070s, RX 6800 XTs, RX 6800s, and any other card that uses the same triple-fan setup.

The MSI RX 6900 XT Gaming X Trio is expected to perform just as strongly in every aspect. Let’s look closer at each aspect individually.

MSI has not released an MSRP for the Gaming X Trio.

We estimate that the price probably falls somewhere between $250 and $350 above the reference card. This would make it about $1350—a premium price tag for minimal gains.

It is difficult to say whether or not this pricing is fair. To see the full picture, it is important to look at all the other alternatives and compare them in terms of performance and pricing.

First of all, this is a massive graphics card. It is 324mm long. Many buyers might realize they have made a mistake when they cannot fit the GPU into their PC case.

Then again, if people are prepared to pay $1300+ for a GPU, they are probably also prepared to buy a larger PC case.

In terms of design, MSI has made a few updates compared to the previous Gaming X Trio generation. The front of the GPU is a bit flatter. The visual elements are less pronounced, and everything seems to flow together much better.

Some plastic silver accents have been added around the three fans, and there are a few slits between the fans that are dedicated to RGB lighting.

On the side, there is MSI and GEFORCE RTX branding. The GEFORCE is a sticker, while the MSI logo is enhanced with RGB lighting.

Above the logo is a stripe across the edge of the card to bring a bit more RGB to the table.

The backplate is made of metal and has good contact with the PCB thanks to the thermal pads located under it.

MSI advertises a boost clock of up to 2340 MHz which is about 90 MHz higher than the reference card. This doesn’t sound too impressive. However, actual performance shows a different outcome. During long gaming sessions, this RX 6900 XT can boost up to 2500 MHz, although, once it settles, the clocks average around 2380 MHz.

However, things become more interesting if you are a fan of custom overclocks.

By pushing the power limit, OC enthusiasts have achieved a maximum overclock of 2760 MHz. That is much better than what the reference card can do (around 2450 MHz).

The RX 6900 XT Gaming X Trio pulls in a lot of power. This makes sense, considering you have to connect it with three 8-pin connectors. The power consumption during gaming is about 350W.

A beefy heatsink is needed to keep the temperature under control.

Fortunately, MSI’s solution with this GPU is pretty good. This beast of GPU averages between 67 °C and 70 °C, which is not bad. It is even better when you consider that the noise levels never exceed 30 dBA.

Of course, if you don’t care about noise levels and want lower temperatures, you can always ramp up the fan speed. 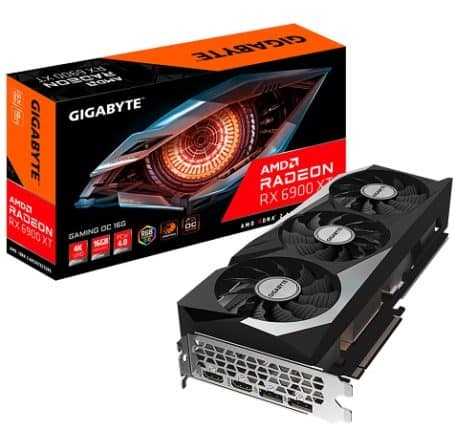 This time around, Gigabyte has released two variants for AMD’s flagship GPU. The AORUS MASTER and Gaming OC. The former is the flagship and more expensive option.

However, the AORUS MASTER is considerably more expensive, so the Gaming OC makes a lot more sense.

The RX 6900 XT Gaming OC might not have as much RGB as the AORUS MASTER and has a smaller heatsink, but it is still a far better deal.

Again, just like the MSI variant, there is no MSRP available.

This is far from Gigabyte’s flagship variant of the RX 6900 XT, so we can’t exactly justify such a significant increase in price.

But let’s see whether the performance can justify it.

This one is smaller than the Gaming X Trio. The entire GPU is only 286 mm long, almost 3cm shorter. This is expected because the flagship model usually features a beefier heatsink.

This same design is used for other AMD GPUs, such as the RX 6800 and the RX 6800 XT, but this is a far more powerful card. Does this mean the heatsink won’t be able to keep up with the demand? We will explore that later. For now, let’s see what the design has to offer.

As is usually the case, there is a triple-fan setup and a basic black shroud surrounding the fans. There is nothing too interesting to report on the front or the sides either.

There is Gigabyte branding on the side, which is RGB.

The back doesn’t show anything noteworthy, just some Gigabyte branding, and that’s about all. Overall, it’s nothing too impressive, but that doesn’t necessarily make it bad. If you only care about performance or are looking for any black GPU to install into your computer, this could be a great option.

Before we can say with certainty that this is a good option, let’s look at the performance.

The advertised boost clock for the Gaming OC is 2285 MHz, which is nearly the same as the reference RX 6900 XT. It is only 35 MHz higher. However, when you fire up benchmarks, rendering tasks, or a demanding video game, the clocks can jump up to 2500 MHz.

The clocks are unable to stay that high for an extended period, but they stabilize at around 2350 MHz.

Although this is one of the cheaper variants of the RX 6900 XT on the market, the heatsink can handle a bit of overclocking.

Some reviewers have achieved an average core clock of 2650 MHz. That is about a 5% higher frequency than the stock overclock.

As previously mentioned, this is a heatsink almost 3cm shorter than the Gaming X Trio. Naturally, the temperatures will be higher.

The “Silent BIOS” enabled the RX 6900 XT Gaming OC average of around 76°C. This is a bit hot but still cooler than the reference card. Unfortunately, it also gets a bit loud; the noise levels can jump up to 36 dBA.

If you don’t care about the noise levels and just want lower temperatures, try switching to the default BIOS. With this BIOS, you’ll drop to 73-74°C. It isn’t a huge improvement, but it is still something.

When buying an ASUS GPU, there are usually about two or three choices. After 2020, these are mainly STRIX or TUF.

However, this time, ASUS has offered something unique, something that we rarely see on the market. The RX 6900 XT STRIX OC LC, a factory liquid-cooled card very similar to the AIO coolers used for CPUs.

Liquid cooling usually results in much lower temperatures, quiet running, and better overclocks. What type of performance can this kind of premium RX 6900 XT bring?

Regardless, most people would be paying that kind of money for the benefits of liquid cooling. Let’s look at those benefits.

It’s safe to say that ASUS has many other brands beat with this GPU. The only other liquid-cooled GPU currently on the market is the Sapphire RX 6900 XT Toxic, which comes with a 360mm radiator. Even so, ASUS takes the cake this time.

The card has the traditional blower design that we used to see regularly back in the day. It is now far less common. As there is only one fan, the other side of the front is completely free, which has allowed ASUS to add some RGB goodness.

The radiator comes with two black ROG RGB fans with white and translucent blades. There is nothing too special to report about it. It is similar to any other AIO dual-fan radiator.

Naturally, the radiator can end up on the back, top, or even the front of the case, depending on the clearance.

The only mediocre part of this product is the backplate. It doesn’t have any unique features, which is sad considering that the back is often the main element of the GPU in a PC case, other than those with a vertically-mounted GPU.

With stock options, the RX 6900 XT OC LC has a boost clock of 2365 MHz, which is higher than the Gigabyte and MSI variants.

However, that isn’t all. ASUS’s product regularly exceeds 2500 MHz when in-game. We assume that this is all thanks to the incredibly efficient cooling solution.

That cooling performance brings much more to the table. It opens up even more OC headroom than you would usually enjoy.

Some OC enthusiasts have reported a successful core clock of 2700 MHz. That is almost 10% higher than the custom overclocks on other models, which is remarkable.

Remember, your mileage may vary. You might even win the “silicon lottery,” which would allow you to push to (or exceed) 2750 MHz.

During long and demanding gaming sessions, the RX 6900 XT OC LC sits at a comfortable average of ~53°C. Low temperatures are expected from liquid cooling, but this is even better than most. It’s more than 15 degrees Celsius lower than MSI’s Tri-Frozr cooling solution. That isn’t even comparable.

Keep in mind that these results were obtained with the performance BIOS enabled.

By switching to the other (silent) BIOS, temperatures jump up to 56 °C. This is still much cooler than most of the alternatives out there.

The list of the most popular RX 6900 XTs probably includes about six to seven models.

However, that still leaves you with a difficult decision. So, which one of these models is the best?

The MSI RX 6900 XT Gaming X Trio is the clear winner here and takes the award for Best Overall. It has a great factory core overclock and is quiet and cool without paying a massive price premium over the reference card. You can’t go wrong with this one.

The ASUS RX 6900 XT OC LC is incredibly expensive, but it is also one of the most unique GPUs the industry has seen. Thanks to liquid cooling, it is also the coolest and fastest RX 6900 XT available. This is why the OC LC deserves the Premium Pick award. 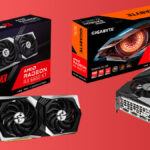