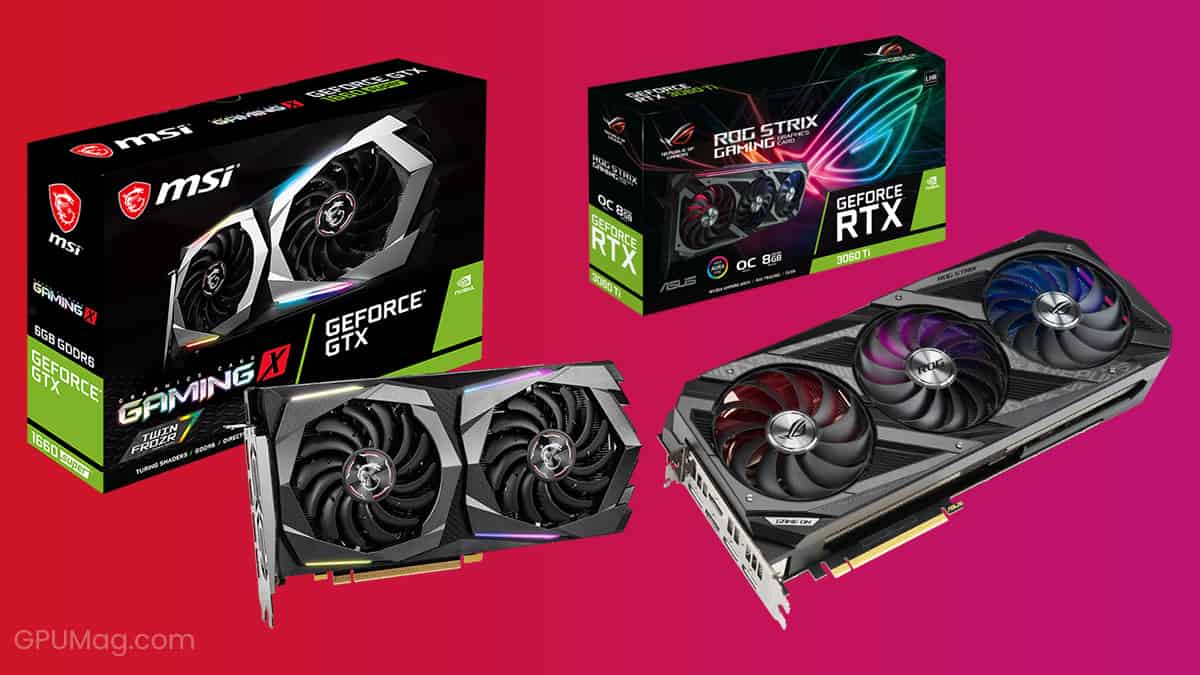 While today’s graphics cards are faster than ever, video editing and rendering can still be demanding tasks, even for a high-end PC. As hardware technology advances, so does software and the standards for renders or videos.

To do any rendering or editing, you will need the hardware to back that up. A faster GPU means you will waste less time processing/rendering/finalizing your project.

These days, you can either use the CPU or the GPU (or both). However, some programs, like Adobe Premiere, prefer the CPU for most of the work and use the GPU for specific tasks like color correction, stabilization, blur, etc.

Other programs, like Vegas or DaVinci Resolve, rely more on the GPU.

So, if you believe you will be doing most of your work on Vegas Pro, Blender, or DaVinci, here’s a list of some of the best graphics cards for rendering and video editing.

Let’s have a look!

Before we can start listing various GPUs, you will have to consider several factors that will affect your experience.

First and foremost is the pricing. To optimize your time as best as possible, you will need a fast GPU. A high-end graphics card usually costs well over $700, so make sure you have your wallet ready.

When on a budget, you can get plenty of GPUs for under $200-300, but understand that the performance will not be the same.

Even if you are working with a program that prioritizes the CPU, it is still essential to have a GPU with higher Video RAM Memory or VRAM. VRAM allows users to work with higher-quality images while maintaining low/fast loading times.

If you are on a GPU with 2GB VRAM or less, you will have difficulty rendering.

We know that there are a lot of people in the 3D modeling industry that can’t work without at least three monitors. So check if the GPU has enough HDMI or DP available for your setup.

Rendering software like Unity, Blender, Maya, or Cinema 4D can utilize 100% of the GPU. When the GPU is at its maximum, it can start drawing some serious power.

So, if you don’t want to end up with huge electricity bills, it may be a good idea to consider the power usage of a graphics card which is why we listed the TDP under the name of every GPU.

With every GPU, we’ll share productivity-related benchmarks so your final decision-making can be a little bit easier. 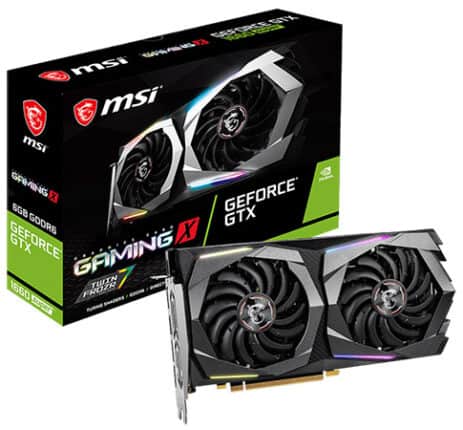 For anyone on a budget, MSI’s GTX 1660 Super Gaming X should definitely be considered. It may have been released back in 2019 and isn’t part of the RTX lineup, but it’s still a competent card, especially if you consider its price.

Its price is not the only thing that makes this GPU a lucrative offer. The fact that it is a 125W TDP card with four display ports and 6GB of GDDR6 VRAM makes this card a solid option.

Additionally, the 1660 Super is capable of some gaming once you are done with working.

It is slightly slower, which is quite a bit more expensive (now worth it), and on part with the GTX 1070, a card with 8GB of VRAM.

We see the same trend in V-Ray, except that it outperforms the 1660 Ti too. 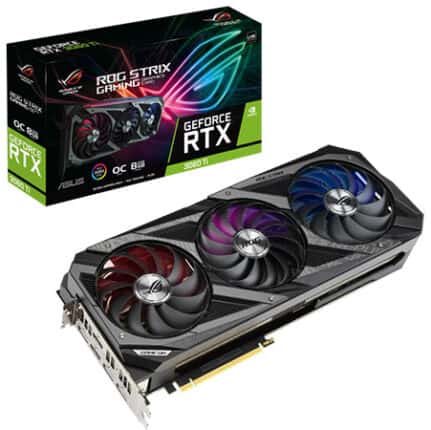 The ASUS ROG Strix is the best RTX 3060 Ti variant out there. The RTX 3060 Ti is also the best value graphics card for rendering. It has an MSRP of $400, and you can find it roughly at the same price.

It has 8GB of VRAM and is exceptionally fast in rendering, video editing, and gaming. It has a higher power draw, at 200W, and it’s a bit bulkier in size because of the STRIX cooler. However, it also has 3 DisplayPort 1.4a and 2 HDMI 2.1.

Sadly, it doesn’t get the 12GB VRAM treatment like the RTX 3060, but it’s still an overall better GPU even with less VRAM.

Performance-wise, the RTX 3060 Ti is an absolute beast.

Within this Linus Tech Tips video, the benchmark shows the RTX 3060 Ti surpassing its predecessor’s flagship by a large margin.

This is the perfect GPU for video editing and rendering for people who don’t feel comfortable spending thousands of dollars on a GPU. 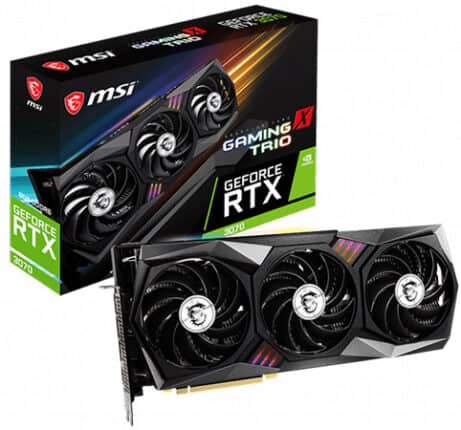 The RTX 3070 is undoubtedly one of the fastest consumer GPUs in the world. And, for that extra performance, the Gaming X Trio is the best aftermarket 3070.

It does not have more VRAM than the RTX 3060 Ti; it’s slightly larger and draws 240W of power. And while it could use a bit more VRAM for both rendering and gaming, it’s still a powerhouse.

We will try to stay consistent with Linus Tech Tips’ benchmarks in Blender or V-Ray for an accurate comparison.

In Blender, the RTX 3070 is consistently up there with the top 5 consumer GPUs. Even the RTX 3070 Ti, which is about $100 more expensive, ends up performing worse than the original 3070.

The only GPUs surpassing it are the RTX 3080/Ti and RTX 3090/Ti. Yes, the RX 6800 XT does provide a better score in this benchmark above, but AMD cards are often worse with rendering software, so it’s best to stick with NVIDIA. 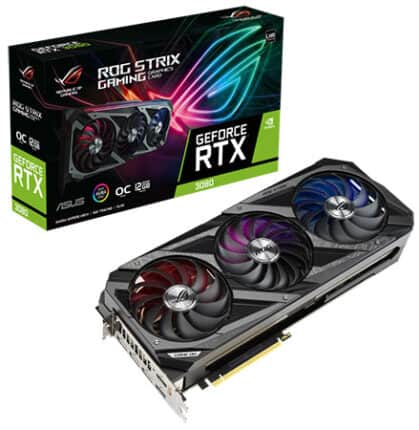 The RTX 3080 is the threshold when things start to get expensive. The MSRP of this graphics card is $700, but this STRIX variant will most probably cost more than the retail price, considering it’s the best RTX 3080.

It also draws considerably more power (320W TDP) than the other GPUs above.

However, even though we’re getting into the expensive segment of graphics cards, the 3080 might well be worth it because of its performance. 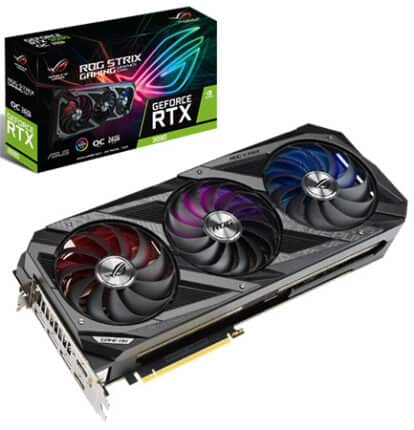 The RTX 3090 is NVIDIA’s most significant achievement in the gaming/consumer GPU sector. It was their fastest graphics card until the RTX 3090 Ti was released. Still, the Ti is based on the original 3090, so it’s the same card with higher clocks.

And again, benchmarks show that the Strix is the best version of the RTX 3090.

What makes this GPU so suitable for rendering or video editing is the fact that it has 24GB of GDDR6X memory. That is double that of the 3080. In other words, you will never have any VRAM-related issues with this GPU.

However, this does not come without any disadvantages. The card has a tremendous amount of memory, and it’s incredibly fast, but it also draws immense power from the socket. With 350W TDP, you will probably notice a spike in your electricity bill.

Either way, let’s look at some performance numbers.

The RTX 3090 runs almost twice as fast as its predecessor, the Titan RTX. But, compared to its little brother, the RTX 3080, it’s about 20% faster.

That isn’t negligible, but is $800+ worth it for 20% less time spent rendering? If your wallet can support this kind of purchase, absolutely! Instead of spending 10 hours waiting for a render with a 3080, you can spend just 8 hours waiting when using an RTX 3090. Time is money, right?

However, if you’re considering spending even more money to get your hands on the RTX 3090 Ti, forget about it.

The difference here in rendering performance is well under 5%, so there’s really no incentive to spend $500 more for a GPU. Instead, you could invest those $500 into a faster CPU, more RAM, better cooling, or a motherboard with more PCIe lanes.

Above are four RTX 3000 (and one GTX) GPUs that either offer a solid price-per-performance or offer one of the best rendering speeds.

However, there are also a ton of other older generation graphics cards or AMD that can fulfill your rendering needs.

We didn’t add any AMD GPUs to the list because most of the rendering software isn’t optimized for AMD. But, when they do work (like in OpenCL Blender), they can even outperform RTX cards.

Here are some of them:

Whichever GPU you pick from this list, you will get hardware capable of delivering fast video editing or rendering times. Of course, which one of these you get depends entirely on your budget.

We suggest going for the RTX 3060 Ti as it offers the best value for your money. If you have extra money left, invest it in other parts of your PC.

The RTX 3070 is also a good value product but will draw a little bit more power.

If you are cash-limited, it’s best to get the GTX 1660 Super as it provides “good enough” rendering performance.

If you’re interested in something even faster or more powerful, it might be a good idea to wait for the RTX 4000 and RDNA 3 GPUs. 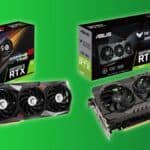