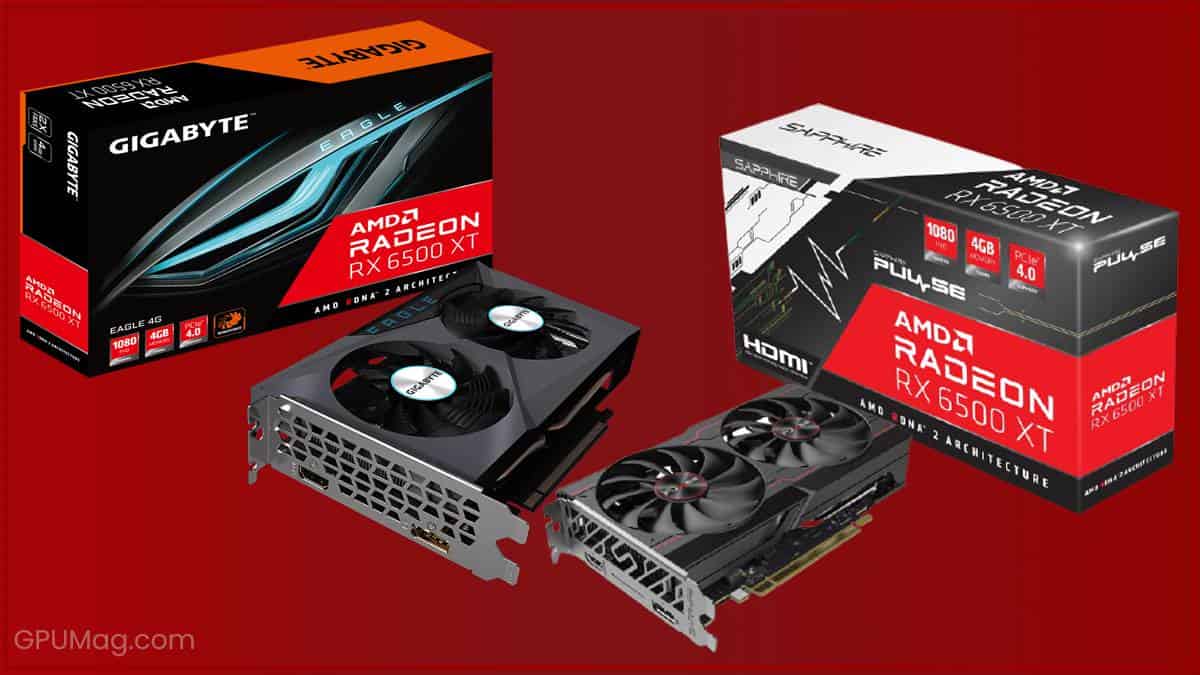 Out of the entire AMD RX 6000 series, the RX 6500 XT got the most flack because of its disappointing specifications. Only 4GB VRAM, 64-bit memory interface, 144 GB/s bandwidth, and many other shortcomings.

However, despite these disadvantages, the RX 6500 XT can be a good GPU pick for many people with a tight budget simply because the alternatives can be considerably more expensive.

If you’re going down this route, we want to ensure that you get the best possible value out of your budget and the best thermals/performance out of the RX 6500 XT.

Let’s see exactly which RX 6500 XT variants are the best out of the bunch.

The MSRP of the RX 6500 XT is $200. However, aftermarket cards from Sapphire, Asus, Gigabyte, etc., usually come with a more expensive price tag.

Unfortunately, none of these companies have specified an MSRP for their models, so we can only estimate their cost. 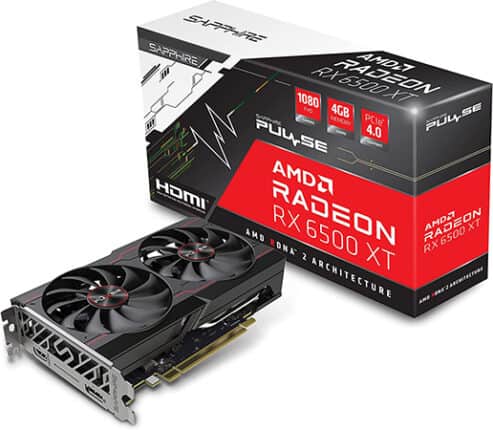 Pulse variants from Sapphire always provide good results out of the box, so we have hopes for this Sapphire Radeon RX 6500 XT Pulse too. Expect a price of $20 to $40 higher than the MSRP.

Either way, a card like the RX 6500 XT doesn’t need a serious heatsink or fans to keep it cool.

Let us have a look at the different factors.

There is a backplate. That is rare on lower-end cards like these, and it is made out of metal, so it won’t hinder thermals.

It is unfortunate that it is limited to just one HDMI and Display Port. But that limitation is on AMD, not Sapphire.

In Cyberpunk 2077, TechPowerUp recorded an average GPU clock speed of 2742 MHz and 2234 MHz for memory clocks. A bit slower than the advertised speeds, but that’s nothing out of the ordinary, so let’s move over to overclocking.

Real in-game performance improvements would be around 6% to 7%.

Enough about that; get a glance at the temperature numbers below.

While gaming, the GPU heats up to about 68 degrees Celsius and hovers around that mark. But, since this is a pretty efficient card, Sapphire is cooling it with a very mild fan curve with an average RPM of 826. Overall, noise levels stay at around 23 dBA.

That’s very quiet, even for an entry-card GPU. 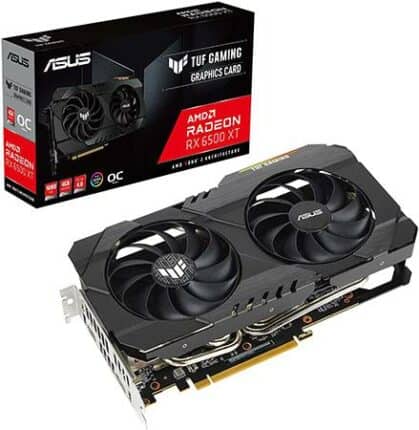 ASUS’ TUF Gaming coolers have proved to be good enough for both RTX and RX high-end GPUs, so we’re confident that it will be enough for this RX 6500 XT too.

We expect to see it somewhere around the $240 price point.

Let’s see how this card performs!

The TUF Gaming has quite a straightforward design. With the exception of a few brandings here and there, the entire shroud covering the PCB is black. It’s a bit longer (25cm) and heavier than the Sapphire card, but it’s still compact since it has only two fans.

There is a backplate, and thankfully, it is made out of metal, so it won’t be trapping heat as some plastic backplates we’ve seen on other cards.

The ASUS Radeon RX 6500 XT TUF Gaming specifications show no factory overclock, so the boost clock is set at 2825 MHz.

However, in Cyberpunk 2077, the clock speeds average around 2900 MHz which is definitely a bit higher than the reported boost clock (again, based on TechPowerUp’s review).

Overclocking the card isn’t as impressive, though, unfortunately. TechPowerUp’s maximum GPU clock overclock is 2870 MHz and a memory clock of 2400 MHz. However, AMD probably has overclocking limitations set in place, so going higher than this might be impossible.

This TUF Gaming card has two BIOS options. One is a performance preset (P-mode), while the other is a silent preset (Q-Mode or Quiet BIOS).

With the P-Mode BIOS, the temperature average is around 51°C, but at the cost of noise and fan speed. Fan RPM jumps up to 1600 RPM and noise levels to 33 dBA. So definitely a very cool card, but we suggest switching to the quiet BIOS. Why?

Well, in this mode, even though the average temperature jumps to 59°C, fan speeds drop to 1150 RPM, and noise levels down to 25 dBA. Still cool while considerably quieter. 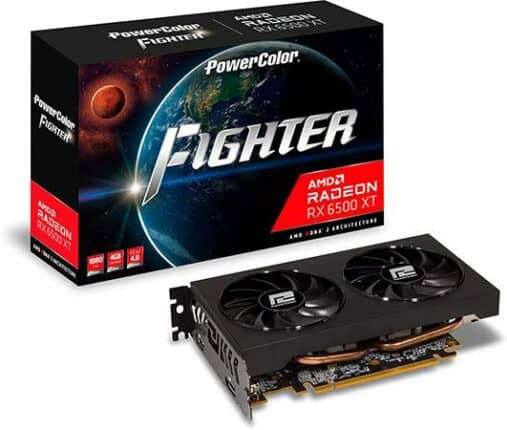 PowerColor often has premium offers for AMD’s card, but since this is a very low-end card, the PowerColor RX 6500 XT Fighter is basic as it can get.

We expect this card to be priced at no more than $20 than AMD’s MSRP.

This PowerColor variant of the RX 6500 XT is quite the entry-level card. It’s small in size, the fans are smaller than usual, and it doesn’t even have a backplate.

That’s about it, so we’re turning over the card’s performance results.

Like the previous two cards in this article, this too is clocked entirely the same as AMD’s reference card at 2825 MHz. In-game, boost clocks are also close to that stock number.

However, when it comes to overclocking, the PowerColor Fighter puts up a good fight with an overclock up to 2950 MHz which is higher than the Sapphire. With this kind of OC, expect a 7% to 8% performance improvement.

It’s a tiny card, so we can’t expect anything amazing regarding thermals and acoustics.

During heavy loads, this PowerColor card heats up to 63 degrees Celsius and noise levels up to 33 dBA. So, definitely cooler than the Sapphire, but a bit louder. However, this can certainly be resolved by adjusting the fan curve in AMD’s software. 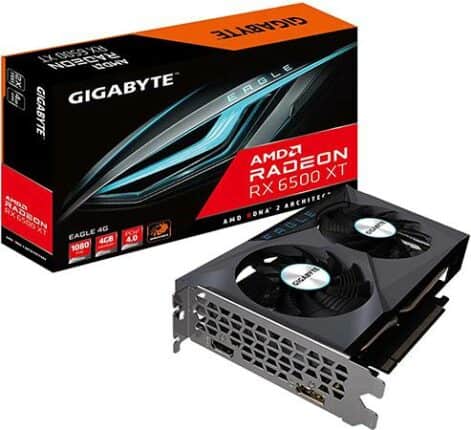 The Gigabyte RX 6500 XT Eagle is a pretty basic GPU like the PowerColor Fighter. Thin heatsink, small fans, and an overall tiny GPU.

We also guess this one should go only $10 or $20 above AMD’s MSRP. Anything above that is not really worth it.

Not only does this card come in a small package, but it is also the smallest card of the bunch. So, if you are looking to make a mini-ITX PC build, this could be a good choice.

Design-wise, it’s pretty simple. A flat, rectangular grey shroud covers the entire GPU with no backplate on the back.

Clock speeds are rated the same as the reference specifications, but in Cyberpunk 2077, they average around 2878 MHz. Not bad.

Overclocking brings the average GPU clock speed to 2957 MHz, which is the best result compared to the rest of the GPUs.

At stock settings, while gaming, the GPU peaks at just 60 degrees Celsius, which is actually impressive considering the card’s small form factor.

Even at that temperature, the fan speed is just around 1280 RPM, based on KitGuru’s review. Noise levels were recorded at 33 dBA.

Overall, a cool and quiet card.

So, out of these four RX 6500 XT variants, which one should you get?

It is a tough choice as all of these cards are very similar in many ways, but we have to pick one.

We want to give the Sapphire Radeon RX 6500 XT Pulse the Best Overall award because of its incredibly quiet cooling, good design, and solid overclock.

Our second-best overall choice is the Gigabyte RX 6500 XT Eagle because it is cheap and delivers in every aspect.

PowerColor and ASUS’ offers are also worth considering if you can’t get your hands on the Sapphire GPU. 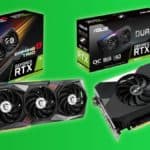