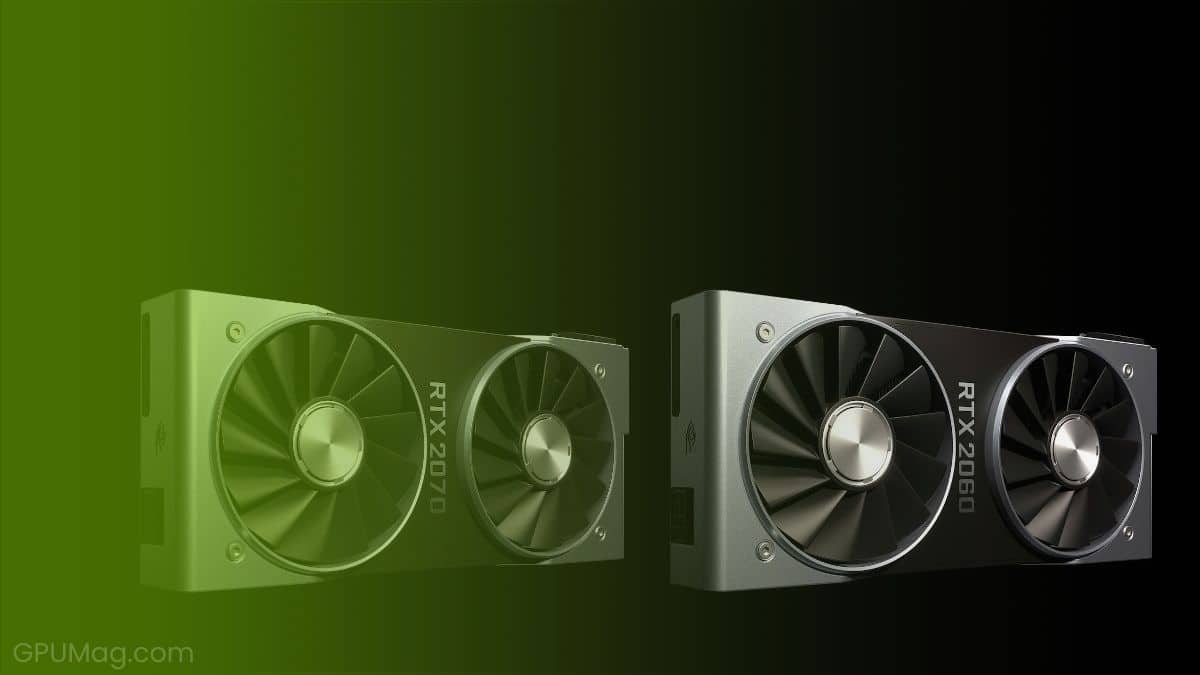 Currently, the best graphics cards you can find are from the RTX 3000 and RX 6000 lineup.

What if you want a card that is less expensive, but that also has ray tracing support

Both the RTX 2070 and RTX 2060 are exceptional candidates but the GPU you should choose will depend on your individual needs.

In this article, we will weigh in on the RTX 2060 vs. RTX 2070 debate and help you figure out which graphics card is a better choice for you.

If you’re looking to build a gaming rig or to upgrade your existing PC with a new GPU, you probably have a budget in mind to get the performance you want.

However, there has recently been an interesting trend in the GPU market, especially on NVIDIA’s side, where the price points are spread apart more than the performance marks.

It might initially seem like a no-brainer to go with the RTX 2070, simply because the model number is higher. If you dig a little deeper and notice the difference in price, it might further encourage you to choose that GPU. Even so, there are some points that you should consider before making a decision.

As their names suggest, both of these GPUs come from NVIDIA’s GeForce RTX 20 line, and both are made using the 12nm manufacturing process, which is an optimized 14nm node from TSMC.

They also both have 10.8 billion transistors, and their die size is identical at 445 mm2. That, for the most part, is where the similarities end.

Let’s take a look at some technical specifications for both GPUs and analyze where the differences lie and why some specs matter more than others.

It might seem that roughly 400 more shader processors will make the RTX 2070 a lot better at the shading process, but the truth is that this is not enough to make a noticeable difference.

It’s true that shading will be a tougher job for the RTX 2060 than the RTX 2070, but this isn’t enough to make a meaningful difference in performance.

However, the difference is greater in the number of texture mapping units. Although the RTX 2070 is stronger, it’s very important to note that even their score of 144 is not at the level of many other cards in the same price range. The RTX 2060 ranks the lowest in this category in its tier of our GPU hierarchy, and it is much closer to the tier below.

Basically, while there’s some difference between these two in this department, neither can really be proud of their texture mapping units.

The RTX 2070 shines more in its number of ROPs and its number of ray tracing cores. Both of these are directly responsible for greater output and, when all of these little benefits are combined, there’s a clear advantage.

Another disadvantage of the RTX 2060 is its number of tensor cores. However, neither of these GPUs is truly powerful enough to take advantage of ray tracing. Fortunately, NVIDIA’s upscaling solution, DLSS 2.0 is starting to gain a lot of traction, allowing users with RTX GPUs to see a lot more FPS in games.

Games that have implemented DLSS version 2.0 enjoy a significant increase in performance while maintaining image quality. In fact, some games even manage to improve image quality with DLSS enabled.

Despite the RTX 3000 series coming in strong with its number of tensor cores, the improvement in ray tracing or DLSS is minimal or non-existent.

The slight difference in RT cores is almost negligible when compared to the powerhouse that is the RTX 2080 Ti. Still, both of these GPUs offer ray tracing, which is currently something that few GPUs out there can claim.

As there is only a slight disparity in the amount of cache memory, it’s tempting to think that it doesn’t matter much. However, specifically, the L2 cache is vital for computing speed. The RTX 2070 is in line with every other RTX 20 series GPU, with the exception of the mammoth 5.5 for the RTX 2080 Ti, and even crazier 6 MB for the Titan RTX.

The next interesting point of comparison is clock speed. The base core clock metric doesn’t offer many surprises in favor of the RTX 2070, but boost clock will certainly draw more attention. This is the only number that gives an advantage to the RTX 2060, but this can be deceiving.

If every other metric in this RTX 2060 vs RTX 2070 comparison was equal, then the 2060’s boost clock might be advantageous, but that simply isn’t the case. The reason why this metric matters less is that there are several different factors involved for the RTX 2060 to achieve that 1680 MHz burst, and that will not happen often.

Next is the area where the RTX 2070 dominates and removes any doubt about which card is better. They both use GDDR6, which was the standard at the time of their release, but the advantages in size, bandwidth and bus width make the RTX 2070 a far better choice for tasks such as 4K gaming and video editing.

Neither GPU supports NVLink nor SLI, so those offer no room for performance improvement. Game or driver support for SLI is almost completely gone, so it’s never really a good idea to go down that path, even if it is available.

The reason why people choose a powerful GPU is to have a more enjoyable gaming experience. If you are worried that you won’t be able to get a top-notch performance out of either the RTX 2060 or RTX 2070, you would be wrong. Below is a good comparison video of how both of these GPUs perform in relatively modern games.

With a simple eye test, we can see that a roughly 10% difference is noticeable, but it also depends on the specific game. The gap is far smaller in games with linear level design. It was somewhat expected that the RTX 2060 would perform better in those types of games, but it’s also interesting that the RTX 2070 doesn’t increase its performance there.

Below is a more comprehensive test that highlights the FPS performance of the RTX 2060 when compared to the RTX 2070.

As expected, there is a noticeable difference across the board. It’s also important to note that the outliers don’t make things look good for the RTX 2060. In contrast, the RTX 2070 has a clear advantage in the spec section and it outperforms its opponent in the gaming performance department as well.

It’s time for the RTX 2060 to finally show why it’s a worthy contender to be your next GPU. At $349, it’s significantly cheaper than the RTX 2070, which retails at $499. While the RTX 2070 is undoubtedly the better card, it is also approximately 30% more expensive, while only bringing a 10-15% improvement in terms of performance. That should really be the deciding factor when choosing between these two.

Another point of interest is the 2060’s 165W power need which is below the 2070’s 185W. This translates to the former needing a 500W PSU, while the latter needs to bump it up to 550W. This power consumption might seem less significant but, when it comes to the choice of needing to upgrade your PSU to accommodate your GPU, it’s definitely better to go with a lower-consuming card.

However, it’s probably important to consider the fact that the RTX 2070 was discontinued pretty quickly, which means you might struggle to find a new one on the market. Your only options for a 2070 might be on the second-hand market.

If you’re willing to wait a while longer, the RTX 3000 series’ mid-range and budget options easily outperform both the RTX 2060 and RTX 2070. 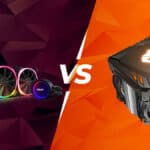 AIO vs Air Cooler – Which Cooling Type Is Best For Your CPU?
Related Topics Tags